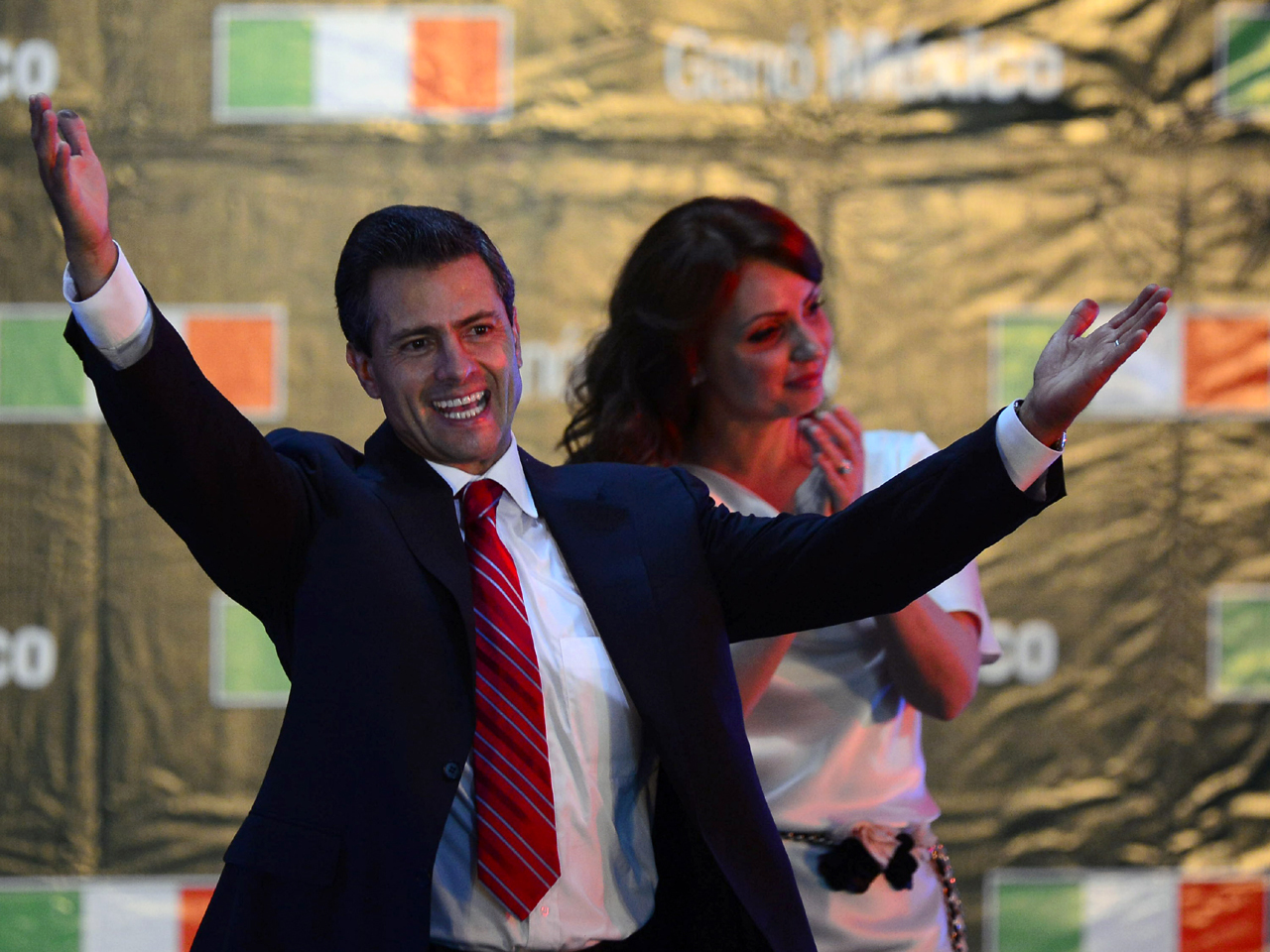 (AP) MEXICO CITY - Mexico's old guard sailed back into power after a 12-year hiatus Sunday as the official preliminary vote count handed a victory to Enrique Pena Nieto, whose party was long accused of ruling the country through corruption and patronage.

The second place candidate, leftist Andres Manuel Lopez Obrador, refused to concede, saying he would wait for a full count.

The Federal Electoral Institute's representative count said Pena Nieto of the Institutional Revolutionary Party, or PRI, won about 38 percent of the vote, prompting wild cheers from a party that was voted out in 2000 after 71 autocratic years in power. Lopez Obrador of the Democratic Revolution Party had 31 percent and Josefina Vazquez Mota of the ruling National Action Party had about 25 percent, according to the institute.

Pena Nieto, who sought to cast himself as the leader of a new PRI, called his victory "a fiesta of democracy."

"There is no return to the past," said the youthful, 45-year-old who is married to a soap opera star. "You have given our party a second chance and we will deliver results."

He promised a government that would be democratic, modern and open to criticism. He pledged to fight organized crime and said there would be no pacts with criminals.

"My gratitude tonight is for the millions of Mexican who voted for me," he said. "I will work for all of Mexico ... I will govern for everyone."

Despite a clear victory, more than 60 percent of voters did not support him and it was not the mandate the PRI had anticipated based on the pre-election polls.

Vazquez Mota, 51, was the first to concede, followed by New Alliance candidate Gabriel Quadri, who had only single-digit support.

At the PRI headquarters in Mexico City, a party atmosphere broke out with supporters in red dancing to norteno music.

There were plenty of reasons to celebrate. The party also appeared likely to retake at least at least one of the two houses of Congress and some governorships.

Critics say the party's 71-year rule was characterized by authoritarian and corrupt practices. But the PRI has sought to portray itself as a group that has been modernized and does not seek a return to its old ways.

Enrique Pena Nieto appears to be accomplishing what many thought would never happen again: the return of a strong and dynamic PRI," said Eric Olson of the Washington-based Mexico Institute. "The question: How will they govern?"

Lopez Obrador took hundreds of thousands of supporters to the streets in protest when he narrowly lost in 2006.

"We hope the candidate of the left will act with democratic maturity and also recognize the results," Coldwell said.

Vazquez Mota garnered little more than 23 percent in exit polls released by Milenio and TV Azteca networks and quick count by Mitofsky. Lopez Obrador had about 30 percent of the vote.

The PRI has been bolstered by voter fatigue due to a sluggish economy and the sharp escalation of a drug war that has killed roughly 50,000 Mexicans over the past six years.

Hugo Rubio, 33, a municipal employee in Nezalhualcoyotl, says what he expects is "more jobs, more tranquility in terms of security" under Pena Nieto.

"He has demonstrated that (the party) had changed, that he cares about the people who are most in need," Rubio said at a red-clad crowd of supporters gathered with banners and balloons.

There were very few reports of problems during the vote, though some polling stations ran out of ballots and at least nine people were arrested in the southern state of Chiapas for trying to pass ballots pre-marked for the PRI.

Interior Secretary Alejandro Poire said that across the country federal security forces were working closely with local and state authorities, as well as electoral officials, to guard the peace during the vote.

Sergio Ortega, a 31 year old businessman from the city of Guadalajara, said he would vote against Pena Nieto to try to prevent the return of the PRI.

"He had too much favoritism. They played many tricks," Ortega said.

Pena Nieto has cast himself as a pragmatic economic moderate in the tradition of the last three PRI presidents. He has called for greater private investment in Mexico's state-controlled oil industry, and has said he will try to reduce violence by attacking crimes that hurt ordinary citizens while deemphasizing the pursuit of drug kingpins.

Pena Nieto also has been dogged by allegations that he overspent his $330 million campaign funding limit and has received favorable coverage from Mexico's television giant, Televisa.

University students launched a series of anti-Pena Nieto marches in the final weeks of the campaign, arguing that his party hasn't changed since its days in power.

But many say the PRI would not be able to re-impose its once near-total control even if it wanted to because of changes in society, the judiciary and Congress.

"The context has changed dramatically," said Rodrigo Salazar, a professor at the Latin American Faculty of Social Sciences in Mexico City. "Society isn't the same. It's a very critical society, a very demanding society, with a strong division of powers."

Caldwell predicted the party would take two and possibly four of the six governor's seats up for grabs from rival parties. He said the party won in Jalisco and Chiapas, and stood to defeat the PAN in Morelos and Guanajuato, despite tight races and claims from both sides of victory.

Miguel Angel Mancera of the PRD says exit polls favor his victory after voting in the capital ended Sunday.

His closest challenger, Beatriz Paredes of the PRI, says none of the exit polls favor her. The conservative National Action's candidate, Isabel Miranda de Wallace, has not commented on the voting.

The PRD has struggled in the rest of Mexico, but it has held a lock on Mexico City since the mayorship became an elected position in 1997.

"Where do they get so many resources to conduct the PRI campaign, so many billboards?" asked voter Marilu Carrasco, a 57-year-old actress who was lined up to cast her vote for Lopez Obrador in southern Mexico City's Copilco neighborhood. The PRI's return to the presidency "could be the worst thing that could happen to us," Carrasco said.

PRI activists, meanwhile, had published photographs of truckloads of handouts they say were given out by Democratic Revolution backers.

But electoral officials have repeatedly insisted that outright fraud is almost impossible under the country's elaborate, costly electoral machinery.

Lopez Obrador, 58, says he wants to keep state control over the national oil company, make Mexico self-sufficient in energy and food production, and fund new social spending and jobs programs by cutting waste and corruption, not by raising taxes.

By 11 p.m. the leftist candidate still remained confident of victory. At his party headquarters, there were only about 500 people showing support for a man known to draw crowds in the hundreds of thousands.

A group of about five people held up signs that call the election a fraud. One sign read, "General Obrador, I am ready for the revolution!"