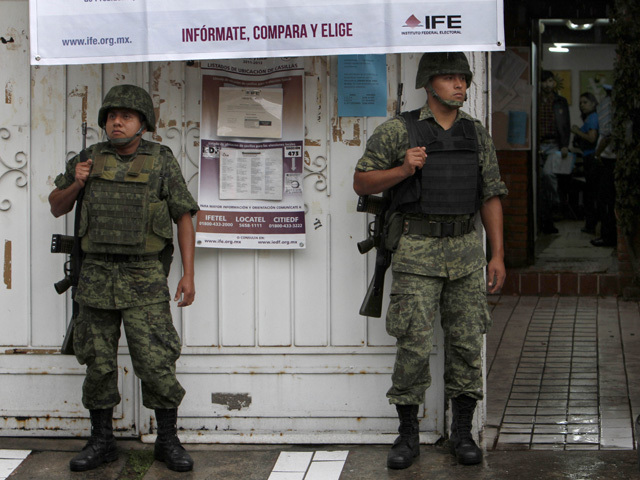 (AP) MEXICO CITY - Political reforms in Mexico have made it much harder to steal an election, officials say. But a lot of people think you can still buy one.

As voters go to the polls Sunday to elect a new president, allegations are flying that candidates are offering money and swag, flouting campaign-spending limits in the process. Most allegations are aimed at the old guard Institutional Revolutionary Party, or PRI, which polls say holds a sizeable lead after being kicked out of the top office by voters 12 years ago.

The PRI held on to Mexico's presidency for 71 years, using vote-buying and other kinds of fraud when deemed necessary, until it was defeated in 2000 by the National Action Party, or PAN. The PRI claims to have changed, and political reforms instituted since 1988 have made Mexican elections far harder to steal.

But in the latest contest, the PAN accused the PRI candidate Enrique Pena Nieto's campaign of acquiring about 9,500 prepaid gift cards worth nearly $5.2 million (71 million pesos) to give away for votes.

Pena Nieto has also been dogged by allegations that he overspent his $330 million campaign funding limit and bought favorable coverage from Mexico's television giant, Televisa.

With a double-digit lead in most polls, Pena Nieto has seldom felt the need to respond to the attacks." We are going to win with your vote, with your free participation, nothing coerced or conditioned," he told a crowd last week at a closing rally in southern Chiapas state.

But the election fraud unit of Mexico's Attorney General's Office says that since the campaign officially began March 30 it has opened investigations into 585 alleged electoral crimes, largely involving complaints that voters were being bought off or coerced to vote for a certain candidate. They have arrested 380 people and convicted 58.

"In a country so poor, with so much inequality, there are undoubtedly forces that will try to take advantage of that," said Ricardo Becerra, coordinator of the institute's election advisers.

On Sunday, Mexico's more than 79 million voters will elect a president, who serves one six-year term, as well as 500 congressional deputies and 128 senators. There are governors' races in six of Mexico's 31 states, plus Mexico City, as well hundreds of local offices up for grabs. For president, voters will choose among Pena Nieto and his chief rivals: Andres Manuel Lopez Obrador of the Democratic Revolution Party; Josefina Vazquez Mota of the ruling National Action Party and Gabriel Quadri of the New Alliance.

Becerra said ballot fraud is "materially impossible" because 92 percent of the 143,151 polling stations nationwide will have registered representatives from all three major parties. At the start of the day, all three must sign off on the ballots, ensuring they are blank. At the end of the day, the marked ballots will be counted again and stamped at the polling place, so counterfeits cannot be brought in.

There will also be about 700 international observers, the largest contingent from the Organization of American States. But that's down from more than 900 in the 1994 and 2000 elections, when Mexico's emerging democracy was under much more pressure.

The PRD and PAN, as well as the PRI, have been accused of giving out gift cards and groceries to garner votes. Technically, parties are allowed to give away anything they want, as long as they report the expense, don't exceed spending limits and don't make people feel the gift is payment for their vote.

In practice, such distinctions are not always clear.

Maria Dolores Flores Sandoval, 66, works the unpaved roads of her Mexico state slum neighborhood in Tultitlan looking to sign up voters for Pena Nieto, saying she has been promised she'll get paid for her work "once they get into office."

"I work at bringing the people out to vote," she said. "I hope it happens soon," she said of her payment, "if not, I'm going to die of hunger."

Cesar Solaris hands out discounted, $7.50-per pair eyeglasses worth three or four times that much at a Pena Nieto campaign office in Mexico City in what he calls "part campaign work, part social work."

A video posted on social networks shows a huge warehouse stuffed with election give-away groceries in the Gulf coast state of Veracruz. The PRD held a press conference Wednesday to display 3,000 gift cards from the Soriana department store that it said were worth about $75 (1,000 pesos) each and had been distributed to voters in the State of Mexico by the PRI in exchange for promises of support in Sunday's election.

PRI leader Pedro Joaquin Caldwell hotly denied his party was involved in any of the card schemes, and has suggested that opposition party members who are far behind in the polls are crying "`fraud" because they know they'll lose.

"It is a completely implausible accusation," Caldwell said. "The PRI has already opened its books ... let me remind you that in spending reports on the pre-campaign (primary races), the PRI was the only party that complied with all the rules."

Becerra acknowledged that technology allows some new methods for vote-buying, but he doubts they could swing an election.

"You could say that, in the past, some cacique (political boss) would hand out envelopes filled with cash at his house, and now it could be a credit card with a certain pre-paid amount," Becerra said. "But I find it unlikely that could be done a thousand times with nobody seeing it, or reporting it."

He said one safeguard is that no matter what voters take or promise, they can still vote freely once inside the curtain-draped booth.

"You can't really tell a man who's poor not to take that (gift)," Becerra said.

At least three groups have set up sophisticated websites where citizens can upload complaints and videos or other material to document irregularities. There are also social media sites for reporting alleged fraud in real time, something unthinkable in the 2006 contest, when Twitter was a few months old.

"Six years ago we didn't have the have the tools we have now," said Carlos Gershenson, a leader of the Contamos election watchdog group.

Lopez Obrador is Pena Nieto's closest challenger, but is behind by at least 10 points in most recent polls. He charged that his narrow loss in 2006 to President Felipe Calderon was because of fraud, though he never proved it. He has been the most vocal against allegations of vote-buying, leading many to fear he won't concede if he loses and will lead his supporters into clogging Mexico City's streets in protest as he did six years ago.

"Things have changed. In 2006 we lacked organization, now we are organized," he said, referring to his party's near-complete coverage of polling observers.

Voter fraud was a well-practiced tradition under PRI rule, including the delivery of ballot boxes to polling stations with the votes already marked. Among the most dramatic examples of alleged vote stealing was the 1988 presidential election, which many people believe Cuauhtemoc Cardenas of the PRD won. Cardenas was ahead until a power outage shut down the count. When the power came back, Carlos Salinas of the PRI was winning and became the next president.

After more than two decades of political reforms, such a maneuver would be impossible today. But handouts are still practiced by all parties, which is legal if the expenses are reported.

Supporters for all parties are brought by bus to massive campaign rallies and given lunch and other gifts in a long-standing Mexican electoral tactic known as the "acarreo," which roughly translates as "trucking in."

At Contamos, whose name can be translated as either "We Count" or "We Tell," activists skew largely young, Internet-savvy and anti-Pena Nieto. They say the PRI accounts for 85.4 percent of the 1,000 or so complaints the site has received about campaign overspending or vote-buying and have seen some new schemes.

In one such alleged scheme, voters would carry pre-marked ballots to deposit at the polls then take out their blank ballot to present for pay. Becerra said the new ballots are hard to counterfeit and are specially stamped when they arrive at the polls.

In another, candidates' supporters allegedly have sought to "borrow" the voting credentials of people planning to vote against them for a fee, returning them after election day. The elections institute ran ads during the 90-day campaign reminding voters that such practices are illegal.

There have also been reports that voters have been offered cash if they agree to take cellphone photographs inside the voting booths, showing their ballot marked for a certain candidate. Authorities have not found decisive proof that practice is occurring.

Even if a candidate is found to have vastly overspent his campaign limit, the result is simply a fine after the election, not the reversal of the results.

"Someone could say, `Yes, I spent ten times more the than the campaign spending limit, fine me whatever you want'," said Jesus Zambrano, the leader of the leftist Democratic Revolution Party.