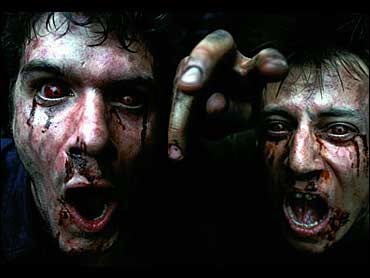 While lunging from the shadows with outstretched, rotting limbs, zombies serve as metaphors for failed ambition and mindless conformity, the way vampires can symbolize sexual aggression and Frankenstein's monster represents science run amok.

In the new thriller "28 Days Later," a man awakens from a coma to find London deserted — except for clusters of fast-moving nocturnal zombies who have decimated the world. A few mistrustful survivors must learn to rely on each other to stay ahead of the swift, hungry ghouls.

Besides scaring people as much as possible, what issues were the filmmakers trying to explore?

"Social rage," said director Danny Boyle, whose other credits include "Trainspotting" and "Shallow Grave." "There's a very specific social intolerance of each other ... It's not just road rage. You get it in hospital waiting rooms and you get it in airplanes and airports. It seems to be a speed fixation. When it's not delivered at the speed desired, people just lose it."

The culture of bigger-better-faster-more turns people against each other, he said, which he represented "through victims who are trapped with this staggeringly fast monster."

The late French existentialist Jean-Paul Sartre once declared: "Hell is other people." Boyle said "28 Days Later" shows the opposite. "We'd love to be on our own and get rid of all our neighbors and the people who annoy us," Boyle said. "But hell is being all alone and on your own. That's real hell."

"28 Days Later" screenwriter Alex Garland, best known for the 1998 novel "The Beach," saw the zombie epidemic as a form of paranoia inherent in modern society. "In exact proportion to how safe they've gotten, people are increasingly afraid of street violence or domestic violence ... and terrorism now."

In the midst of the Great Depression, the 1932 cult-favorite "White Zombie" used horror to address the subjugation of the working class. Bela Lugosi played a megalomaniacal villain who turns ordinary people into zombies to slave in his sugar mill.

As World War II loomed and fears of Nazism rose in the United States, 1941's "King of the Zombies" used the monsters as a metaphor for the effects of propaganda: a mad scientist uses magic and mind-control to create zombies for the Axis powers.

"The zombie has become one of these standard control motifs that is used in all kinds of different ways," said David Skal, author of "The Monster Show: A Cultural History of Horror." "It's the flipside of all the American ideals about individuality and individual responsibility. The zombie is the fantasy infantile way to give up control."

The landmark zombie film remains George Romero's "Night of the Living Dead." Shot on a shoestring budget and released in 1968, some critics saw its legions of staggering, mindless cannibals as an allegory for the hawkish nature of mainstream America during the Vietnam war.

"When the film first came out it was just railed against," Skal said. "People didn't know what to make of it. It presented this stark image of American culture as occupied by the soulless, robotic and bloodthirsty."

Romero saw it the opposite way: the zombies were the hippies. "We were basically trying to do a parable about revolutionary society coming in and swallowing up the old — in this case literally," Romero said, laughing.

Others inferred themes of racism (the black hero is shot and killed by would-be white rescuers who assume he's a zombie), free love (a young couple chooses to burn to death together rather than be separated) and the collapse of the family (a bullheaded man and his nagging wife isolate themselves and are killed by their zombie daughter.)

"Much what has been written about 'Night of the Living Dead' probes a little too deep," he added. "A lot of the other stuff, the fact that Duane Jones was a black man playing the lead, was basically accidental. He was just the best actor from among our friends. So he did the role."

The Pittsburgh-based filmmaker embraced the satiric side of the zombie movie 10 years later to skewer consumerism in 1978's "Dawn of the Dead." Zombies stumble dead-eyed through a shopping mall hunting for humans like they were bargains.

Romero said he tried to mock the conservatism of the 1980s in his third zombie film, 1985's "Day of the Dead," in which humans isolate themselves in remote bunkers and try to enslave the dead. He's currently working on a fourth installment, in which the zombies are just another social illness. "The dead are the homeless," he said. "We walk over them on the way to the theater."

An unofficial spin-off of Romero's "Dead" series was the 1985 spoof "Return of the Living Dead," which critics — remarkably — praised. Some saw it as a parody of the decade's workaholic ethic: The employees at a medical supply warehouse full of cadavers literally work themselves to death — along with wave after wave of police officers and paramedics who futilely try to fight the zombies. One zombie snarls into a defeated officer's radio: "Send more cops."

Overbearing parents got similar "splatstick" treatment in 1992's "Dead Alive," the comedic gore-fest directed by Peter Jackson (best known now for his "The Lord of the Rings" movies.) "Dead Alive" focused on a wimpy man and his bossy mother, who becomes a zombie after being bitten by a weird animal and infects her pushy friends and neighbors. The climax is a rare example of a hero trying to keep the monsters inside a house instead of barricading them outside.

Those who have been embarrassed by their families can probably relate.