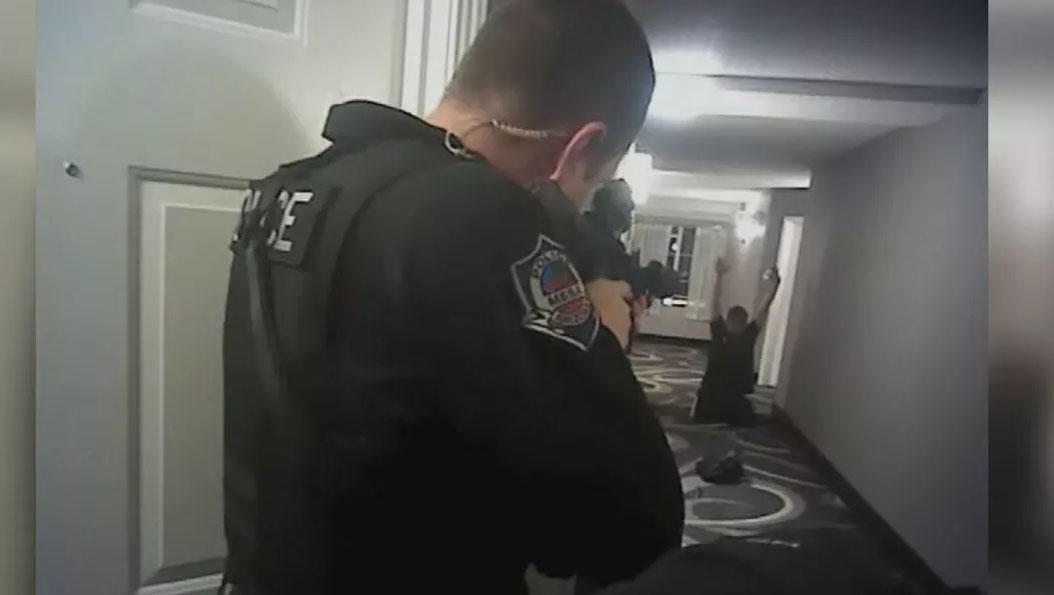 MESA -- Police in Mesa, Arizona released disturbing body camera video on Thursday hours after a former officer was acquitted of a murder charge in the fatal shooting of an unarmed man.

The verdict cleared Philip Brailsford, 27, of criminal liability in the 2016 death of Daniel Shaver, of Granbury, Texas. He was also found not guilty of reckless manslaughter, reports CBS Phoenix affiliate KPHO-TV.

The shooting occurred at a hotel in the Phoenix suburb where officers responded to a report of someone pointing a gun out of a window. The video, obtained by KPHO, shows Brailsford pointing a gun at Shaver as Shaver lies on the ground, holds his hands in the air, cries and begs the officer not to shoot.

Brailsford orders Shaver, 26, to lay face-down in a hallway and refrain from making sudden movements - or risk being shot. He also orders a woman in the hallway to lie on the ground. Shaver is seen complying with the officer's order to put his hands on top of his head and cross his left foot over his right foot.

Brailsford then orders the woman to kneel, put her hands in the air and crawl towards officers. Officers then apparently handcuff her out of the view of the camera.

Brailsford then orders Shaver to kneel, and yells for him to keep his legs crossed, to which Shaver replies, "I'm sorry."

Shaver is then seen putting his hands behind his back. The officer yells, "Hands up in the air!," and Shaver complies.

"You do that again we're shooting you, do you understand?" the officer says.

"Please, do not shoot me," Shaver is heard saying, his hands in the air.

"Then listen to my instructions!" the officer yells.

"I'm trying to just do what you say," Shaver says.

"Don't talk! Listen!" Brailsford yells. He orders Shaver to keep his hands up.

"Your hands go back in the small of your back or down, we are going to shoot you, do you understand me?" Brailsford yells.

Brailsford then orders Shaver to crawl towards him, to which Shaver again says, "Yes, sir," as he cries. As Shaver inches forward, he is seen reaching toward the waistband of his shorts, and Brailsford opens fire. Brailsford said he fired his rifle because he believed Shaver was grabbing a handgun in his waistband.

Brailsford told jurors that he was terrified for the safety of officers and a woman who was in the hallway. He also said he felt "incredibly sad" for Shaver.