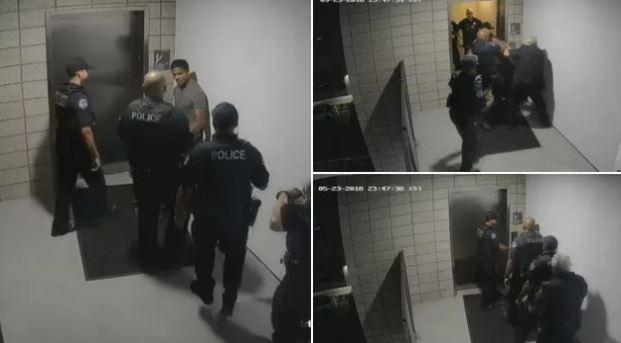 MESA, Ariz. -- Four Mesa police officers are on administrative leave following an incident captured on video last month in which a suspect was punched several times. Police Chief Ramon Batista tells Phoenix TV station ABC15 he wasn't notified of the May 23 incident until a week after it occurred and he then began an investigation.

Officers responded to a domestic violence call at a Mesa apartment after a woman claimed her 20-year-old ex-boyfriend tried to break in.

Responding officers say they encountered two men leaving the area and told both to sit down, but only one complied.

Apartment surveillance video shows officers first surrounding, then repeatedly punching the other man, 33-year-old Robert Johnson, who had remained leaning against a wall. Johnson can be seen slumping to the ground as the officers continue to punch him. He doesn't appear to be resist, though police said he had refused to comply with their demands.

He was arrested on suspicion of disorderly conduct and hindering prosecution.

The other man is accused of disorderly conduct-domestic violence.

Mesa Police Chief Ramon Batista told CBS affiliate KPHO  that Johnson was at the apartment complex with a friend. The friend was allegedly trying to enter his ex-girlfriend's apartment, which prompted her to call 911.

"It is disappointing because this isn't the way I see the people that I work with and the community that we serve," Batista said.

Benjamin Taylor, an attorney representing Johnson, said in a statement to KPHO Johnson was cooperating and following police instructions.

"Mr. Johnson was sitting peacefully against a wall when the assault began.He did not resist," the statement said. "The misconduct of these officers would have gone unnoticed if it had not been captured by surveillance videos at the apartment complex where the assault occurred."

He called on the Mesa Police Department to discipline, re-train or dismiss the officers.

"The Mesa Police Association feels it is grossly inappropriate to release a portion of video with no audio that does not include the full context of the encounter," the statement said. "Furthermore, we don't understand why video is being released when an internal investigation has not been completed. It is important to understand that any use of force, when viewed, is difficult to watch and never looks 'good.'"

Mesa police said they plan to release additional video related to the incident later this week.