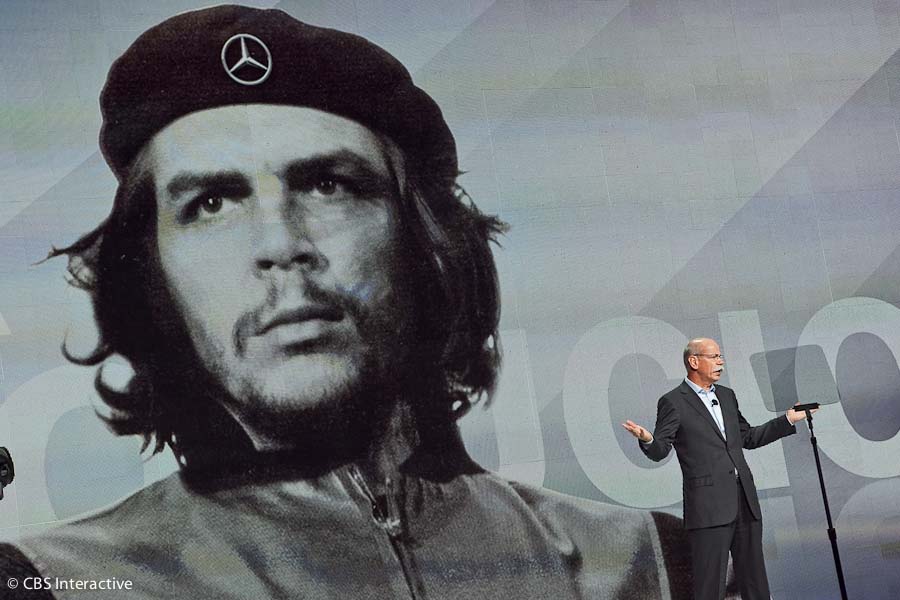 They said it, not me.

"Some colleagues still think that car-sharing borders on communism," Mercedes-Benz Chairman of the Board of Management Dieter Zetsche said today, speaking about Mercedes' . "But if that's the case, viva la revolucion!"

To be sure, a luxury-car maker like Mercedes is not actually promoting communism. But during his CES talk, Zetsche pushed hard on a vision that the company has for a greener future that allows drivers to reduce emissions by using connected and social technology to easily find compatible passengers to share rides with.

Still, it's odd--and no doubt intended to stir up conversation--to hear a company so inexorably tied to money and lavish lifestyles invoking philosophies like communism. Especially with a picture of Cuban revolutionary Che Guevara towering over Zetsche as he talked. Of course, Che's signature beret sported a Mercedes logo.

Either way, Mercedes' car-sharing technology is part of the company's larger vision for a smart-car future, one it's already implementing in its cars, and which it thinks can help drivers save money on fuel, and save the earth from excess emissions at the same time. As well, Mercedes wants to leverage the latest in telematics technology to give those who plunk down small fortunes on its vehicles the most up-to-date driving/technology experience.

To begin with, Mercedes promoted a new telematics system it called . "The car becomes a mobile communications center than enables driver and passengers to access all modern media and services at any time," it said in a release this morning. "Uncoupling from the conventional vehicle development cycles is achieved on the one hand through secure and comfortable integration of the smartphone in the vehicle, and on the other hand through the use of a consistently cloud-based solution. This ensures that one is always in close touch with the rapid developments in the smartphone and computer world."

According to the release, @yourCOMMAND focuses on four areas: sensory perfection, holistic experience, natural interaction, and a convenient remote control.

Mercedes' vision starts with the notion of the cloud, and giving its cars' telematics system--known as "mbrace"--the latest in connected apps: software that stays up to date via the Internet. The idea here seems to be that Mercedes' cloud connection should reduce owners' reliance on going to dealers for software updates. Essentially, owners should be able to download things like infotainment updates and upload vehicle diagnostics. Zetsche said that mbrace is now available on its German SL model, and should be coming to the U.S. in all new models.

Another big part of Mercedes' vision of a tech-savvy car is voice recognition--and comprehension. Intelligent cars should be our "digital companions," Zetsche said, but there's little value in a car's tech systems telling you that it's raining outside. That's something you already know. What would be much more valuable would be a system that could tell you that it will be raining in a couple of hours at your destination and that you should bring an umbrella. That's useful proactivity, he said.

Zetsche laid out a picture of a tech-savvy car that has a touch-screen dashboard and an augmented reality overlay. In a video he played, a Mercedes owner sat relaxed in a car, playing with its "Minority Report"-like interface while the vehicle safely drove itself down the road.

Clearly, this is the future, but one that Mercedes wants to make a reality--at least for its customers.

'Communism'
The next idea Zetsche talked about was CarTogether, the car-sharing application he said could help the world cut down on emissions, while also helping people create new bonds of friendship as like-minded strangers meet for the first time.

Future Mercedes cars will feature CarTogether, an app that can help drivers find people with whom to share rides. This is not quite the same thing, of course, as lending out your Mercedes, as services like Getaround or Wheelz would like to have you do. Rather, the app will help owners find riders. And this is all in a bid to cut down on emissions by cutting down on the number of car rides people have to make.

Zetsche said onstage that car-sharing is sustainable. And with cars with electric drive, "we can effectively push zero-emissions mobility."

The idea here is that using social tools like Facebook, drivers can find potential riders that share similar interests, serving everyone involved. For example, Mercedes showed a video that depicted a Mercedes owner driving to a concert and using the CarTogether system to find someone looking for a ride to the same show. The driver picks up the passenger, and a lifelong friendship begins. That may be far-fetched, but at least it's easy to imagine the driver picking up someone with a shared interest.

It's interesting, of course, to see a company like Mercedes promote the idea of car sharing, since carmakers don't make as much money on fleet purchases as they do on single-car sales. And while CarTogether seems aimed mainly at individual owners, Zetsche also seemed to be touting a larger car-sharing concept.

Remote information
Another idea Mercedes wanted to promote was the tight link between cars and smartphones that we'll all know and love in the future. Especially when it comes to electric cars, something Zetsche talked about at length during his CES talk.

One thing that people who have electric cars worry about is what he called range anxiety. And as a result, Zetsche talked about the idea of a smartphone being the link between the car and the next charging station. "If you like, you can even follow your own car on Twitter," he said. "It can notify you when your car is charged."

Zetsche also talked about fuel cells as part of a future of highly fuel efficient vehicles, as well as electric cars as a smart way of storing renewable energy. And he said that production of "B-class fuel cells has already begun."

But regardless of the amount of emissions being put out by cars, there's always going to be gridlock, he said. And that's where connectivity between cars can help. In other words, on-the-fly technology may well be able to help with traffic management. "We use the Web to manage huge amounts of data traffic," he said. "So why not use it to manage huge amounts of road traffic?"

Here, the idea is to embed cars with sensors that can quickly identify threats. With many cars using them, it could be "crowdsourcing applied to traffic," he explained. "The trick is using information from the cars ahead of you" to avoid congestion before you reach it. And one way to do that is to aggregate GPS data from smartphones.

Zetsche said Mercedes will be implementing the first private system using tools like this later this year in Germany. He wouldn't give many details, but did say that "If we bring the best of both worlds together, we will not only protect the traditional strength of automobiles but also make further growth sustainable and create new opportunities."