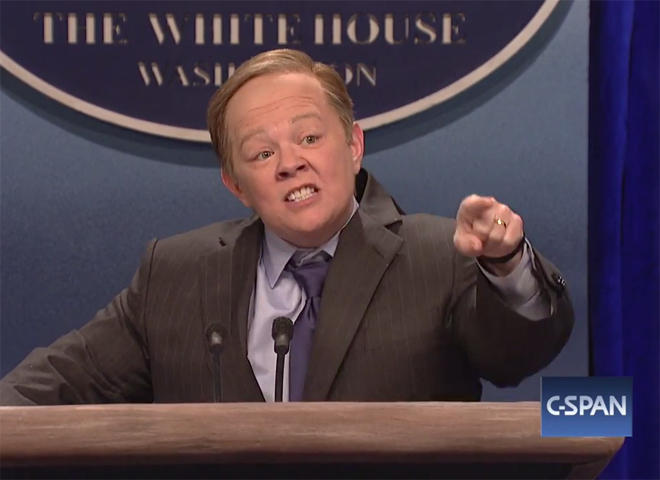 “I know that the press and myself have gotten off to a rocky start,” McCarthy says in the sketch “And when I say ‘rocky start,’ I mean it in the sense of ‘Rocky’ the movie, because I came out here to punch you.”

McCarthy-as-Spicer goes through some of the recent pressure points between Spicer and the media. In a reference to the spat over inauguration crowd sizes, McCarthy described the scene when Mr. Trump named Judge Neil Gorsuch as his Supreme Court nominee.

“Everyone was smiling. Everyone was happy ... And no one, no one was sad,” McCarthy said. “Those are the facts forever.”

She told the reporters that she was going to apologize “on behalf of you, to me, for how you have treated me these last two weeks -- and that apology is not accepted.”

And when actor Bobby Moynihan, portraying a New York Times reporter, asked about Mr. Trump’s travel ban and the use of the word “ban,” McCarthy (as Spicer did in real life) responded by saying Mr. Trump only used the word “ban” because reporters had been using it.

“You just said that,” she said. “He’s quoting you. It’s your words. He’s using your words, when you use the words and he uses them back, it’s circular using of the word and that’s from you.”

When another reporter asked, “Are you O.K.?” McCarthy picked up the podium and ran at the reporter, threatening: “I will put you in the corner with CNN.”