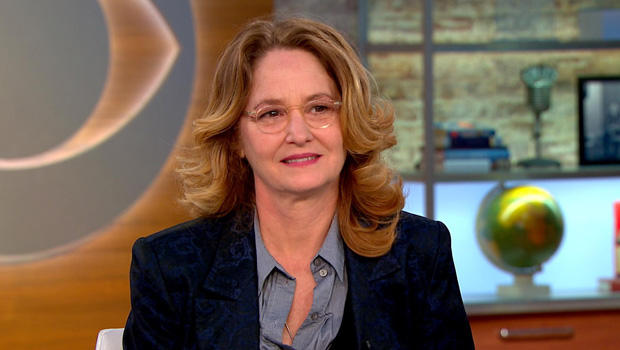 Melissa Leo has played more than a hundred characters over more than three decades, from the soap opera "All My Children" and the series "Homicide: Life on the Street" to the film "The Fighter," for which she won an Academy Award.

Leo now stars in the new Showtime series "I'm Dying Up Here," based on the L.A. comedy scene in the 1970s. (Jim Carrey, who got his start back then, is executive producer.) Leo plays Goldie Herschlag, the owner of a famed comedy club that makes or breaks young stand-up comics.

"It's a drama about stand-up comics, is the way I like to see it," Leo said on "CBS This Morning."

"You play a very powerful figure here," said co-host Anthony Mason. "You basically anoint these comedians who all want to get on 'The Tonight Show.'"

"You say anoint as if Goldie thinks she's some kind of a god, which she does not," Leo replied. "People think that of her. But she does not see that. She knows funny from not funny, and that's all she's interested in. She doesn't care if you're a boy or a girl, black or white, Chinese -- she doesn't care. She cares if you're funny. She doesn't want you in her club, on her stage, if you not going to be funny."

The role of the club owner is reminiscent in some respects of Mitzi Shore, who founded the Comedy Store in 1972. But Goldie is not Mitzi, said Leo:

"Not Mitzi. Hi, Mitzi, if you're watching! I've never met her, I hope to one day. There's one woman who did what Mitzi Shore did in the time in which she did it, and that was to take a club that had some funny guys in it but it also had some improv, some folk music, some poetry readings, like a lot of clubs across the country. Vaudeville had died, and where was that stand-up comic going next? And Mitzi Shore in my opinion (and you can read it in the book "I'm Dying Up Here") invented a place for stand-up comics. Painted the walls black, put a spotlight on the stage and said, 'Only comics.' And that was unprecedented, and that's the only way in which I'm playing Mitzi Shore at all. I'm playing Goldie Herschlag."

When asked about method acting and her process for approaching her characters, Leo said, "Method acting is a long-disputed, misused term. If you're acting, I hope to God you've got a method!

"Sometimes as an actor you use little or no technique. You can kind of step right into the role, look at your scene partner opposite you, and there you are, doing the scene. Not so for me and Goldie. Goldie has talents that I don't possess. She has a way that is not my way. She presents herself to the world in a way that is not the way I present myself to the world. She is what I call a long reach for me and a joy and a pleasure to play because of that. I'm more interested in the character than myself. That's part of my method."

The cast of "I'm Dying Up Here" includes both actors and stand-up comedians. When asked if she mentored any of her fellow castmates, Leo replied, "I'm always talking about acting with whoever I'm working with, whether they want me to or not!"

"We have both comics in the show playing comics -- not necessarily the kind of comedy they do in their own act, which is always a little difficult -- and we have actors playing comics," said Leo, who remarked that she herself never had anything to do with the world of stand-up until she shot the pilot. "... There's a lot of learning that's going on -- the actors are learning about stand-up, and indeed the stand-ups are learning about acting, and we're all sharing together. It was one of the great joys about the show.

"And the excitement of sharing it now is, it's rare in the work that I do you that you have such a good time, such a sense of that camaraderie that we often imagine is there. And in the shooting of 'I'm Dying Up There,' we really love each other."

You can watch the first episode of "I'm Dying Up Here," streaming for free on Showtime, a division of CBS, by clicking here.

Watch a trailer by clicking on the video player below: