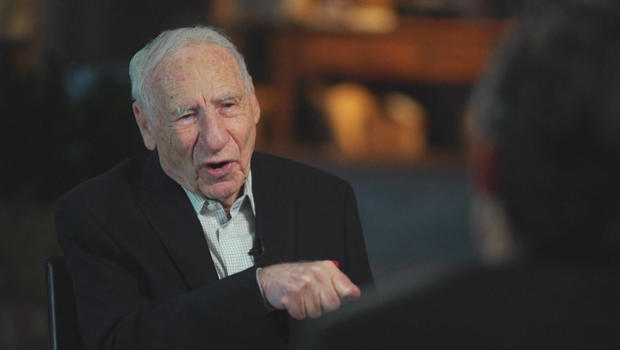 Leave it to Mel Brooks to start HIS interview with a question. "I don't get paid for this, do I?" he laughed. "I'm just curious, you know? I'm used to getting paid!"

For the record, Brooks did not get paid. But he still delivered the comedy, just as he's been doing for nearly a full century, pretty much from Day One. "I knew from a very early age, I knew that comedy was my thing," he said. "It was me. Because people would look down at my crib, I was only a few months old, and they would laugh. And I said, 'That's it, that's it. That's what I want!'"

Turner Classic Movies host Ben Mankiewicz asked, "When did you know that you were funny, that you could make people laugh?"

"In school, I guess. You know, my neck still hurts from being taken by the neck to the principal's office, 'cause I was terrible. Every time I would do my impression of Boris Karloff, the monster, James Whale's fabulous monster, saying this word as a server at a dinner table, he'd say, 'Anti-pasto?'  Just antipasto and that was it. And it was so great. And the rest of the class would laugh. They didn't know why they were laughing."

We've all been laughing ever since.

As a writer and director, Brooks has created some of the sharpest and most irreverent comedies of all-time: "Blazing Saddles," and later the same year, "Young Frankenstein," plus "History of the World Part I," and of course, "The Producers," which earned Brooks an Oscar for Best Screenplay. It was the story of a Broadway musical about Adolf Hitler.

"You know, Hitler has made me a very good living," Brooks said. "I'm one of the few Jews that have survived Hitler well!"

Only Mel Brooks could get away with having a novelty Hitler bottle stopper in his home. "Someone sent it to me. I get a lot of Hitler paraphernalia."

Born Melvin Kaminsky in Brooklyn in 1926, Mel is now 93, and as sharp as ever. And keenly observant! "You're smarter than you look, you know?" he told Mankiewicz.

"You could've been a star, but you wear glasses."

Comedy is Mel Brooks' life. But his love will always be Anne Bancroft.

To the world, she was one of the great stage and screen actors of her generation, with astounding range – from "The Miracle Worker," which earned her an Oscar as Helen Keller's teacher, Annie Sullivan, to "The Graduate," playing Dustin Hoffman's married seductress, Mrs. Robinson.

But to Brooks, she was his soulmate.

"She's always pushed me," he said. "She's always been an inspiration. She always thought I was talented. She believed in me right from the beginning, as a songwriter as well as a screenplay writer or whatever I wanted to do. She said, 'You can do it.'"

On the surface, they presented as a Hollywood odd couple. But the truth is there was so much in common. Both grew up the children of immigrants – a Jewish boy from Brooklyn, and an Italian girl from the Bronx.

Brooks said, "She was Anne Marno for a while. She kept the Italian thing. She was Anna Maria Louisa Italiano; Italiano's her real name. I think it was Darryl Zanuck gave her a list of people and she said, 'I like Bancroft.'"

And Brooks really liked Bancroft, long before the day they met.

They'd met, he recalled, on February 5, 1961, at a taping of a Perry Como TV special. Bancroft was rehearsing. Brooks, four years removed from his long run as a comedy writer for Sid Caesar's TV shows, walked over with a friend to watch.

"So, 'What are you doing?' She said, 'I have to see somebody at the William Morris Agency.' I said, 'I gotta see him, too!' I went with her. I got a cab, And she liked my whistle. (whistles) yeah, it's a good whistle!"

Then, completely smitten, Brooks began to pursue her, rather relentlessly.  "Every night, wherever she went, I would show up. You know, by the fourth or fifth time, I'd say, 'It's kismet. We just seem to be going …' She said, you know, 'Bull, it's not kismet.'"

Mankiewicz said, "She told her analyst, 'Let's speed this process up. I've met the right man.' Like she knew, too."

"Yeah. There was nobody else. She had everything. She had looks, she had brains, she had purpose."

Their son, Max, a successful writer himself (he wrote "World War Z"), was asked, "What do you recall of what your parents were like together?"

"My answer to that is I need some sort of context. I need to compare it to something else. And it was only later when I got out into the world, I realized that most people are not as animated, and most people were not as funny," he replied.

In 1983, they starred together in "To Be or Not to Be," which opens with an idea Bancroft had: to sing a duet in another language.

Brooks said, "You know, she learned that song ("Sweet Georgia Brown") in Polish. She learned it, she taught it to me. She drilled it. She drilled me every day until I could actually do it in Polish with her!"

Bancroft was with him during "Blazing Saddles," Brooks' bold comedy about a black sheriff in a racist Western town.

Mankiewicz asked, "You think 'Blazing Saddles' would succeed today? Could it get made today?"

"I don't know," said Brooks. "I don't think so, because I went too far, with the use of the N-word, with cowboys sitting around a camp farting. I mean, the movie's outrageous! And a lotta people, you can't blame them for saying 'Never should be made, terrible.'

"But that's what I do. I make the things that nobody else would make."

"What does that tell you about the state of comedy today?"

"Well, for me, they're a little too strict about, you know, what's in bad taste and what's in good taste," said Brooks. "I mean, m**********r, the MF word, it's purposeful, it has grit. It has truth, truth and grit. And you can't shower people with truth and grit if you're gonna be careful about stepping out of the lines. You gotta step outside the lines. And I think that the political correctness is too, I'm sorry to say it, is too politically correct."

Brooks continues to write and perform, but he's always thinking back to his wife – they were inseparable for 41 years – until Bancroft died of cancer in 2005. She was 73.

Max Brooks said, "You know, I think my dad is at a time in his life when he's looking back on all he has achieved. And it's no small truth that much of his achievements are because of my mother. My father's the first one to tell you that she saved him."

Fourteen years after her death, Mel Brooks wants Anne Bancroft's legacy celebrated – and he wants it seen.  "I just thought, before I die, I would like to see a couple of her movies put together in a box set," he said.

The Anne Bancroft Collection blu-ray box set contains eight films: "Don't Bother to Knock," "The Miracle Worker," "The Pumpkin Eater," "The Graduate," "Fatso," "To Be or Not to Be," "Agnes of God," and "84 Charing Cross Road."

"There's a lotta great stuff here!" Brooks said. "If you get it in advance, you can get it for 59 bucks! When it hits the streets in a couple of months, it's $80. You wanna save a couple of bucks and see the greatest performances from the greatest actress ever? Fifty-nine bucks, Amazon!"

A pitch for eight Anne Bancroft movies from the funnyman who knew her best.

"She could be the leading lady or an aide-de-camp," he said. "She could help people, be quietly on their side pushing them, or she could just be on stage with the spotlight and star in something. She was a great gift. She was a gift from God."