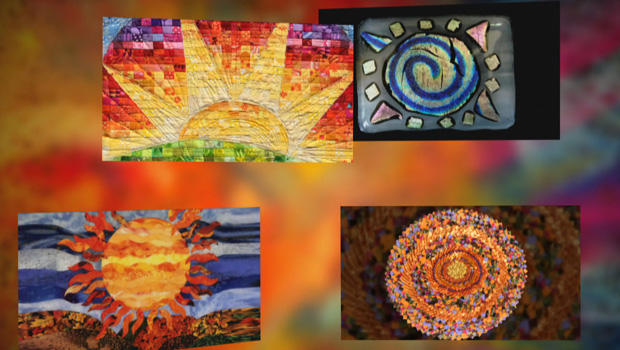 No one can control the weather, but there IS someone at CBS who can make the sun come out. Meet our associate director Jessica Frank, our "keeper of the suns."

For 20 years, she's been handpicking every shining example of sun artwork to appear on our program – that's about 9,000 and counting.

And, she tells correspondent Serena Altschul, she even dreams about suns!

They all come from the same place: Our viewers. "They come with great notes," Frank said. "And each one has a story."

It's a tradition that started decades ago, when the first unsolicited suns showed up in our mailbox.

One of Frank's favorite artworks: An egg, with a sun on the front, and Charles Kuralt on the back.

She's gotten suns that were hubcaps … suns made from birdseed.

They're made from every material under the sun: "Figs, and vegetables, and pieces of broken glass, and seashells, and chili peppers, Post-it notes crunched up into a whole bunch of little pieces.  And we used it!

Jessica finds her inspiration by watching the stories themselves. ("Okay, I have a really good sun for this…").

And sometimes a fan stops by to cheer her on. "The magic, the magic. YOU are the special sauce!" Jane Pauley laughed.

Some suns she uses as soon as she gets them; others she saves for a rainy day.

"I'll have a sun for four years or five years and I don't have a place for it," said Frank. "And then I'll watch the piece and I'll go, 'Oh, thank goodness, I can finally use the whatever sun,' and I get so excited."

There was never any question about the suns she gets every year from Jim Stella's high school art class in Philadelphia. She's used about 60 of them so far!

Back in 2015, after Stella sent in his first batch, Jessica Frank wrote the teacher a note:

"Hello, Mr. Stella, … I am WOWED at the beauty of these suns – every one of them – and I'd love to use them on our show. Your students are enormously gifted and I am truly honored that you would think of submitting them to us. … All the best, Jessica Frank."

Altschul asked Stella, "How did the class feel when you first heard back from Jessica?"

"I gave them the Andy Warhol line, which is, 'I'm gonna make you famous for at least five seconds!'" he laughed.

Altschul asked Frank, "Did you ever think when you started out in television at CBS, that you would somehow land here, with this [responsibility]?"

"No, no. Absolutely not!" she laughed. "If somebody told me to draw a sun, it would be a disaster!"

And thankfully, she doesn't need to.

The rise of video game music

This week on "Sunday Morning" (February 5)
Thanks for reading CBS NEWS.
Create your free account or log in
for more features.
View CBS News In
CBS News App Open
Chrome Safari Continue
Be the first to know
Get browser notifications for breaking news, live events, and exclusive reporting.