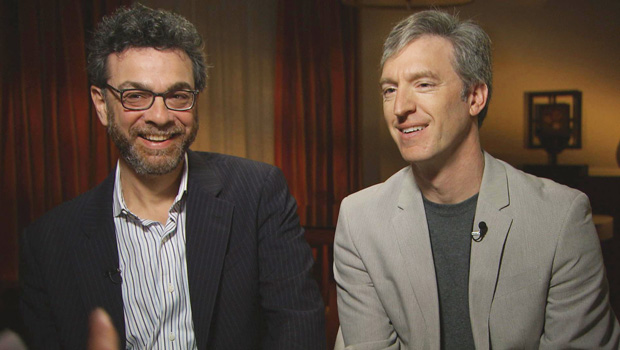 The "odd couple" of publishing is responsible for a new and distinctly quirky way of looking at human behavior, all of it done under the banner of the made-up word "Freakonomics": Martha Teichner now with a tale of two authors:

Steve Levitt and Stephen Dubner are rehearsing a video promo for their new book, "Think Like a Freak."

In case you haven't heard of the "Freakonomics" phenomenon, just let it be said that the first book, published in 2005, has now sold more than 4 million copies.

So what is Freakonomics?

"I think a freak, to me, is someone who's different, but usually freaks rejoice in their differentness," said Levitt.

"We're not really encouraged or trained or given the opportunity, really, to think for ourselves," said Dubner. "And I think that's what a freak is, is simply someone who's able and willing to think for yourself."

The pairing of these two self-declared "freaks" is unlikely. Dubner almost became a rock star, with a recording contract even, but quit to be a writer. "Writing was just the thing that I loved," he said. "Words are just constantly coming in and going out, like this estuary."

Levitt studied economics at Harvard and then MIT, but was terrible at math. "It was a bloodbath from the moment I showed up at MIT," he said.

So what happened? "I'm a little bit odd," he said. "I mean, I'm interested in odd things, and I just said, 'I'm not gonna worry. I'm just gonna take the topics that interest me, things like crime and corruption and cheating."

So the concept of Freakonomics was born. long before there was such a word. Levitt became an award-winning professor of economics at the University of Chicago, and a rising star.

Meanwhile, Stephen Dubner was living in New York City. Lately, he's been hosting a podcast and radio program on NPR, but before Freakonomics he was writing for the New York Times Magazine and was assigned a profile of Levitt.

Levitt recalled: "I wasn't really interested in having the article written, but it was the New York Times! So, 36 hours of interviews later, I've never been happier to see somebody go!" he laughed.

"I think the fact that we turned out to be good partners was not remotely pre-ordained or even would've been easy to predict," said Dubner.

It wasn't their idea to write a book together, but a publisher offered them so much money they couldn't say no. Levitt's sister thought of the name: "I told her, 'Hey, this is the book,' gave her a copy of it, and within about 15 minutes, she said, 'Freakonomics'! And I said, 'You're right!'" Somehow that word just epitomizes something about the core of what we do."

The new book tries to de-mystify that process. Take, for example, the story of Takeru Kobayashi -- which Dubner refers to as "one of the most serious stories in the book somehow."

In the 2001 4th of July hot dog eating competition at Coney Island, when Kobayashi appeared out of nowhere, the world record to beat was 25 1/8 hot dogs in 12 minutes. He ate 50, and won six years in a row. How? By thinking like a freak.

"He said, 'What is the most efficient way to eat a hot dog?'" Levitt recalled. "That meant taking the bun away from the dog, and then breaking the meat in half and stuffing two halves into his mouth at once! And then taking the bun and doing something very counterintuitive, which is dipping it in water -- it actually makes them go down more smoothly. So he just rethought the entire process."

"He approached it like a scientist," said Dubner. "He was an economics major, and he was very methodical. He gathered data, he tried many, many things."

Teichner asked if people will remember the point better because the story is goofy? "Absolutely," said Levitt.

For Dubner and Levitt, data is the magic word, their answer to even their most provocative assertion, that legalization of abortion was the big reason serious crime has dropped dramatically since the 1990s -- not innovative policing or high incarceration rates.

"I don't think anyone disagrees that legalized abortion led to a big decline in the number of unwanted children," said Levitt. "And so the theory was so incredibly simple and so obvious, that 1973 was Roe v. Wade, and crime started falling, you know, 18 years later. And that's kind of the peak age for crime. It turns out if your mother doesn't love you, it's probably the single best indicator that you're likely to be a criminal."

"We just laid it out and said, 'This is what the numbers seem to show,'" said Deubner.

The pushback has been intense -- from law enforcement, as well as from both the right and the left.

"We don't care about politics, we're not interested in politics," said Levitt. "And so consequently, when we're controversial, we're, I don't know, equal opportunity offenders across the political spectrum!"

"We generally don't write about something unless we have something to add," said Dubner. "And by nature of being new and different, it will definitely raise some hackles, just because it challenges the orthodoxy."

Their way of working together challenges orthodoxy a bit, too. Where do you think Dubner and Levitt do some of their best brainstorming?

Playing golf, whenever they meet up in the same city.

So how, you might ask, would Levitt and Dubner apply Freakonomics to golf? Stay tuned . . . they're at work on that project already.