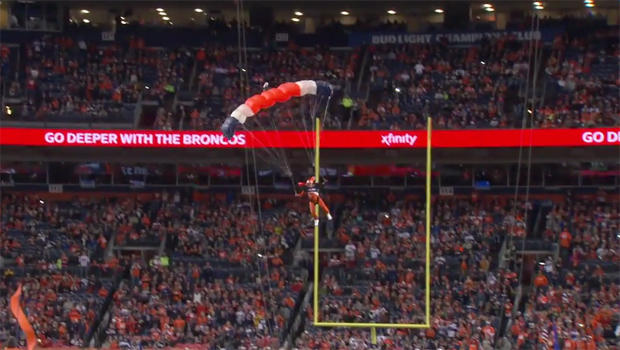 A few years ago, the Denver Broncos decided they wanted to upgrade their pre-game festivities. They wanted something high-energy, high-speed, and high-drama.

And they got it.

The four-person parachute team known as Thunderstorm gets fans excited ahead of every home game. Their aerial acrobatics have made them one of the most exciting pre-game rituals in professional sports – and the only one of its kind in the NFL.

Correspondent Dana Jacobson met the daredevils, and suited up herself to experience what makes their stunts so dangerous and invigorating.

Just prior to kick-off, they leapt from 5,000 feet over downtown Denver, and swooped into Sports Authority Field at Mile High, through a maze of criss-crossing wires, at 60 mph, igniting more than 70,000 fans.

"This is what we do it for -- this is everything for us!" said Allison Reay.

"Yeah, it's all about the fans, and when they are cheering, we are fired up," said Kenyon Salo.

The team trains an hour north at Mile-Hi Skydiving, where the average skydiver descends with a parachute twice as big and lands at a speed three times slower than the Thunderstorm.

What is it about skydiving?

"It's total freedom," said co-founder Jimmy Tranter. "You don't worry about if you got bills to pay, It's just, like, 60 seconds to do your job, and then back to reality!"

Tranter never considered doing anything else, even after losing his mother in a skydiving accident as a kid.

"Even in the darkest moments, it was never a question to me," he said. "It was a matter of how old I had to be before I could jump. I couldn't imagine not doing it."

Allison Reay discovered her passion for flying through the air, and found a mentor in Tranter: "I love swooping parachutes. I love flying parachutes. And so this demo is, like, the king of all demos."

Reay is the only female on the Thunderstorm team. "Yes, the only woman to jump into the stadium at all, which is pretty big honor for me."

"And a little badass, too," laughed Jacobson.

The jump into the Denver stadium is complex. One little detail makes it, perhaps, the most difficult and most unique in the world.

"A lot of people will look at the stadium and say, 'It's a big, wide open field," said Kenyon Salo. "But immediately as soon as we add the field goal cables, add the cable cam cables coming from all four corners, and a 50-yard line cable, you actually have to dive small parachutes through this hole here.

"It's really like parallel parking a Ferrari at about 60 miles per hour," Salo laughed.

When it comes to jumping out of a plane, it's one thing to hear about it … but another to experience it, as Jacobson discovered first-hand.

In addition to jumping for the Broncos, the Thunderstorm all have day jobs -- training members of the military, and designing and testing parachutes. Some also compete in national skydiving competitions.

The one thing they all have in common is a passion for the jump.