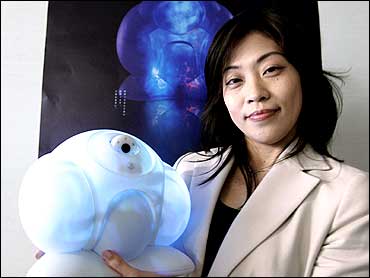 Two Japanese companies have the answer for people worried about leaving their homes empty while they go on vacation: a house-sitter robot armed with a digital camera, infrared sensors and a videophone.

Stores across Japan started taking orders earlier this month for the Roborior — a watermelon-sized blob-shaped eyeball on wheels that glows purple, blue and orange. The device, named for a portmanteau of "robot" and "interior," according to gadget blog Gizmodo can sense break-ins using infrared sensors and notify homeowners by calling their cell phones and sending video from its digital camera.

The glowing plastic robot is supposed to resemble a lifelike creature, despite its inability to move and lack of human features such as limbs or a face. According to the Roborior maker's Web site, designer Paul White said his inspiration for the Roborior came from jellyfish, which communicate undersea via light transmission, much like 21st Century electronic devices communicate through wave transmission.

Tmsuk has also produced a four-legged security robot called Banryu, which is about the size of a large dog and sells for $18,000.