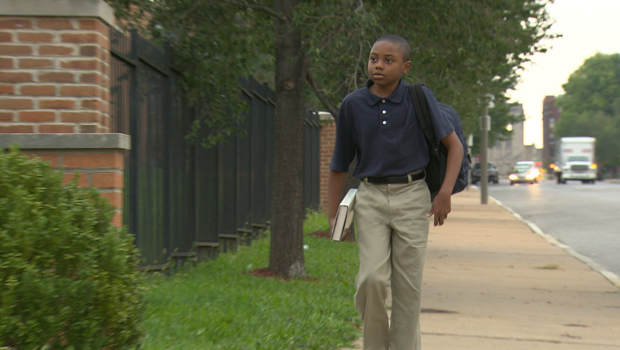 You're about to meet an outspoken young man, in a town much in the news over this summer. Jane Pauley is our guide:

In Ferguson, Mo., last month, after a police officer shot and killed an unarmed 18-year-old, Michael Brown, amid all the anger and shouting on the streets, a boy approached the microphone at a meeting of the St. Louis County Council:

"I would just like to say that the people of Ferguson, I believe, don't need tear gas thrown at them. I believe they need jobs."

"Where are all the African-American police officers in our community?"

"I thought he was right on, he's exactly right," said Hazel Erby, who chairs the council (and whose district includes Ferguson). "You know, the jobs, education, all of that had everything to do with what happened in Ferguson."

Pauley asked Govan, regarding the protests in Ferguson, "What I saw on television was basically your backyard. What did it feel like to watch those protests that inspired you to write that speech?"

"There has always been a problem, even when Ferguson never happened," Govan said. "The minority community, we need more African-American police officers."

Pauley asked if anyone in his school aspires to become a cop. Govan said no.

"Look, let me tell you why: From the beginning we've felt abused by these people. Why would you go up to serve among the abusers? It doesn't make any sense."

If you think Marquis is a young man with a future -- and he does -- well, it didn't always seem that way.

Pauley asked, "What's your story? You started life -- you didn't have an easy life?"

"No, not from the beginning," he said. "A regular child would grow up in America and have two lovely parents, and family of four. That didn't happen."

"Yeah," he laughed, "because that's a 'regular' American family. But especially in the minority community it's totally different. As soon as I came out of my mother's stomach I wasn't with her anymore. I was completely in the foster care, and then completely with my great-grandmother. That's how it happened from the beginning."

His great-grandmother and guardian Jennie Bracy first brought a nine-year-old Marquis along when she went to vote. After that, she says Marquis just took over.

"When I go to the poll, he say, 'Okay, we're voting for this person, that person and that person,'" said Bracy.

"But you trust him?"

There is a certain magic to knowing in sixth grade what the rest of your life is going to be about.

"Are you a politician?" Pauley asked.

"No. I wouldn't call myself that."

"So what do you call yourself if not a politician?"

"If I were running for office here in Missouri, I would call myself a Missourian, a true Missourian who understands the people."

"You are such a politician, you got it!" Pauley laughed.

"Because I am a Missourian. I do believe in ideals. I have my ideals that I know Missourians support."

While other kids are playing video games at home, Marquis is watching cable news non-stop. He's reading President Obama's book, "The Audacity of Hope." And he hopes to be a senator, maybe even president one day.

Pauley asked Govan, "Well, why do so many people want to be president? It looks like such a hard job."

Marquis Govan will be old enough to run for president in 2040. Make a note.