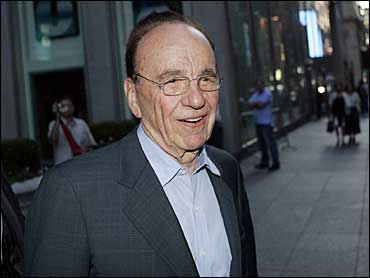 Media Matters, a liberal media watchdog group, has made Fox News its top target, so it may come as something of a surprise that the head of the nonprofit organization is planning to sit down for a "friendly lunch" with Rupert Murdoch, CEO of Fox News' parent company News Corp.

The organization won a lunch with the media mogul after bidding $86,000 for the opportunity in an online charity auction benefitting the Global Poverty Project.

The auction site, Charity Buzz, describes the event as a "once in a lifetime chance to sit with self-made billionaire Rupert Murdoch, face to face over a friendly lunch and get his feedback first hand on your proposed business ideas. Valid for a total of 6 people."

"I look forward to this opportunity to have a friendly lunch with Rupert Murdoch, along with five of my invited guests," Media Matters founder and CEO David Brock said in a statement. "I will soon contact Mr. Murdoch's office to determine a mutually convenient time and place in New York."

If Brock and Murdoch do actually meet for lunch, the conversation is sure to be interesting. As an organization "dedicated to monitoring, analyzing, and correcting conservative misinformation in the media," Media Matters dedicates much of its efforts to antagonizing Fox News.

During the midterm elections, for instance, Media Matters ran an ad spotlighting the conservative news organization's $1 million donation to the Republican Governor's Association. Media Matters only paid for the ad to run once -- on Fox News' "The O'Reilly Factor."

Last month, liberal billionaire George Soros donated $1 million to Media Matters "in an effort to more widely publicize the challenge Fox News poses to civil and informed discourse in our democracy," Soros said in a statement.