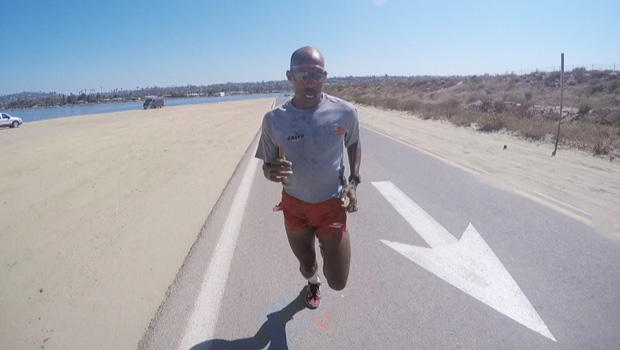 “Never give up!” One man who knows the truth of that is a veteran American athlete who is running in the marathon today, at one of the concluding events of the Olympics in Rio. Lee Cowan has his story:

To watch Olympic marathoner Meb Keflezighi train is to watch perfection. Every stride is like an artist’s brush stroke.

It’s no surprise he’s a hero to runners. For most, he needs no introduction.

“He’s an inspiration to everybody,” said Paul Balding.

Mark Minichiello said, “We kind of think of him as the ambassador for the sport.”

He’s a quiet celebrity -- shy, in a way -- who this morning is taking his talent and his grace to the world stage in Rio.

“For me it’s just another race,” Keflezighi said, “I go out there and do what I do best.”

This is his fourth Olympics. He won Silver in Athens back in 2004. But Rio is different.

Keflezighi -- who emigrated from Eritrea at age 12 -- is now 41, making him the oldest American Olympic marathoner in history.

Cowan found him high in the mountains of Mammoth Lakes, California. Keflezighi comes to this thin air before every big race to push his body hard, at altitude.

He literally wrote the book on training: “Mebfor Mortals: How to Run, Think and Eat Like a Champion Marathoner” (Rodale).

Keflezighi calls San Diego home. He lives there with his wife and their three young girls.  He walks them to school almost every day -- about a mile each way.

His study is lined with various honors -- magazine covers, pictures of him at the White House, and a fistful of medals.

Keflezighi figures he’s run over 100,000 miles in his long career -- that’s four laps around the globe and counting.  “I’m on my fifth lap!” he laughed.

It’s all a long way from his desperate beginnings in the African nation of Eritrea. He grew up one of 10 children in a war-torn village, without electricity or running water and very little to eat.

“I just remember eating dirt for food, because your mind tells you to look for something … survival instincts, I guess. You just dig deep on the ground, until you feel the moisture. And you just eat it and swallow it basically. That’s food. Whatever you needed to do to survive.”

With the help of the Red Cross, Meb’s father managed to get the family to safety, fleeing first to Italy and then to San Diego as refugees.

He remembers the date when he first came to the United States: October 21, 1987. “It’s like a birthday for us, or Independence Day.”

Keflezighi’s entire family crammed into a small apartment surviving largely on food stamps. His father cleaned floors and drove taxis, and helped them all learn English.

“He used to wake us up, 4:30 a.m.,” Keflezighi recalled. “We would flip through the dictionary word by word. And that’s how we tried to learn English.”

All nine of his siblings went on to get college degrees, despite feeling like outsiders at first. “We had different clothes,” Keflezighi said. “We had afros. Everybody was making fun of us. Tough position to be in as a kid.”

He had never heard of running as a sport -- he’d never even heard of the Olympics -- until his 7th grade PE teacher, Dick Lord, changed all that.

Back in 1988 Lord asked his class to run a mile around a playground as fast as they could. Keflezighi was lightning fast (he ran it in 5:20), blowing everyone else away.

“Meb had something special about him,” he told Cowan. “He had it in his heart. He wasn’t very big, but I’ll tell you, he had the drive.”

He went on to get a scholarship at UCLA, winning four NCAA titles. As soon as he graduated, he got his U.S. citizenship.

Over the next decade he racked up an impressive career, including a brilliant win at the biggest marathon in the world: New York City in 2009.

But that’s when Keflezighi’s patriotism came into question.

“Somebody said that I was not American enough, because I wasn’t born here,” he said. “Because of the color of my skin? Because I was born in Africa, is that what it is? Or how come some others don’t have to defend where they were born because they are Caucasian? It’s hard. You get that feeling -- kind of punch me below the belt.”

That pain lingered until he ran what he still considers the race of his life: The Boston Marathon in 2014, the year after the deadly terrorist attack.

Of all years that city really needed a win, and Keflezighi delivered.

He made the front page of almost every newspaper in the country as the first American to win that legendary race in 31 years.

Suddenly, instead of questioning his patriotism, Keflezighi’s patriotism was all that mattered.

“Winning the Boston Marathon is the most meaningful victory in my lifetime,” he said. “Most Bostonians don’t say ‘Congratulations.’ They just say ‘Thank you.’”

This morning, as he represents the U.S. in Rio, he knows this will be his last Olympic marathon.

But no matter what happens on the course today, Meb Keflezighi has already left his imprint as an athlete, an immigrant and, most of all, an inspiration.