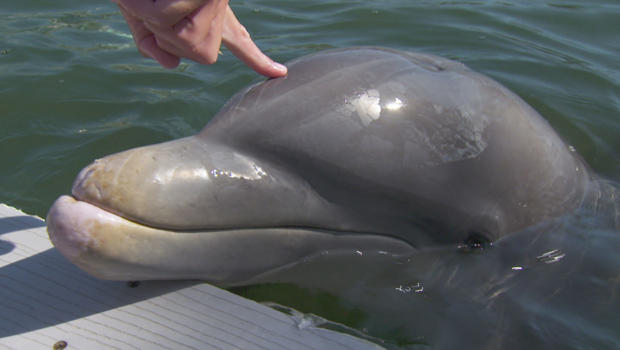 We love our pets -- often so much it's easy to be convinced they're lost in profound, important thought. So, just what ARE they thinking? We asked our resident animal lover Martha Teichner to investigate:

Fenway, the Boston terrier, is trying to figure out how to get at a treat hidden inside a puzzle. What's going on in his mind?

Teichner asked, "If somebody asks you, 'Is my dog smart like a human is smart?' how do you answer that question?"

"It's not fair or even correct to compare dog intelligence to human intelligence," said Dr. Gregory Berns, a neuroscientist at Emory University. "The real question is, 'What is a dog good at?'"

About seven years ago, Dr. Berns had an idea: If he could train dogs to hold still in an MRI … a big if … he could get some answers.

Truffles is living proof it can be done. She's one of more than a hundred dogs who've taken part in MRI experiments involving everything from facial recognition to self-control.

In one experiment, Truffles is shown two toys, and knows "giraffe" means treat, "whale" no treat. But what about photographs of the toys?

Dr. Berns uses scans of Truffles to look at the reward center of his brain – right where it is in humans. "We're looking for activity in that location."  The point: to find out if Truffles reacts to the toys and the photos in the same way.

Discussing another dog's scan results, Dr. Berns said, "It's too soon to say, 'cause this is just one dog, but what that tells me is they're not literally seeing the two equivalently." In other words, they seem to know that one is a photograph, and one is real.

Not to be outdone by a dog, Donna, a 34-year-old African elephant at the Oakland Zoo in California, makes the connection between a picture of a banana her trainer shows her and the real thing.

That's important, said Caitlin O'Connell Rodwell, an animal communication expert who studies elephants, and teaches at Stanford University. "Because if you can imagine an object in your mind, that means you can think about that object and plan around that object. Does Donna understand that that picture of the banana represents a real banana? 'Cause that means that she can imagine that in her mind.

"The elephant has the largest brain-per-body size, bigger than humans," said Rodwell. "If size matters, and it does appear that size matters, then elephants could possibly be smarter than us. Elephants are so much like us -- watching them caring about each other, watching their politics."

As for communication, elephants understand us better than we understand them. Behaviors Donna was taught to aid in her own care led to the banana test.

"That's what's so exciting about these cognitive experiments with Donna, is that we can now ask her a lot of different questions," said Rodwell. "Donna understands English. So, there's probably a lot more that she understands about language than we've figured out how to ask her."

Thanks to technology, researchers are beginning to decipher dolphin language -- the chirps and clicks that come from their blowholes.

"We looked at how mothers would retrieve their calves, which we can ask them to do on cue," said Jill Richardson, a scientist at the University of Miami's Rosenstiel School for Marine and Atmospheric Science. Her work at the Dolphins Plus Sanctuary in Key Largo, Florida, has involved identifying each individual's signature whistle, which is like its name.

"It's like a mom in a room saying, like, 'Jill Lauren, come for dinner!' And then the calf responds immediately."

""It's like having the first and last name," said Teichner.

"Exactly. My kids always know they're in bigger trouble when I use the first and last name!" she laughed. "I really think we're scratching the surface. We know they're chatty. The next step really with their communication is learning how they might string acoustic signals together in different ways to have different meanings, like syntax."

Do dolphins speak in sentences? These dolphins obey more than 50 commands, but when given a hand signal that means "create" -- do whatever you want -- they do.

Teichner asked, "What have the dolphins taught you about humans?"

"Oh gosh, I think the most important thing is that maybe we're not as smart as we think we are," Richardson replied, "and that it's definitely opened my eyes to how we put some constraints on our understanding of intelligence, when it might be this much more colorful and broad experience for these animals."

Intelligence we underestimate, because we don't know any better.