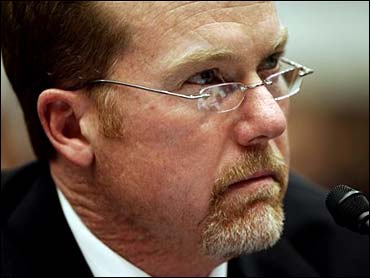 In a room filled with humbled heroes, Mark McGwire hemmed and hawed the most.

His voice choked with emotion, his eyes nearly filled with tears, time after time he

refused to answer
the question everyone wanted to know: Did he take illegal steroids when he hit a then-record 70 home runs in 1998 — or at any other time?

Asked by Rep. Elijah Cummings, D-Md., whether he was asserting his Fifth Amendment right not to incriminate himself, McGwire said: "I'm not here to talk about the past. I'm here to be positive about this subject."

Asked whether use of steroids was cheating, McGwire said: "That's not for me to determine."

To a couple of other questions, all he would say is: "I'm retired."

The dark clouds over baseball rained on Big Mac, whose powerful bat once captivated the nation.

He was just part of Thursday's show at the House Government Reform committee's hearing on steroids in baseball, when lawmakers repeated threatened federal legislation to govern drug testing in not just baseball, but perhaps all U.S. sports.

Five current and former players, three of them among the 10 leading home run hitters in history, found themselves sitting biceps-to-biceps on Capitol Hill instead of a baseball field, wearing business suits instead of uniforms, forced by subpoena to testify before Congress about whether they cheated by using steroids.

Heads turned, strobes flashed and necks craned to get a glimpse of them on a day of extraordinary theater. The players bemoaned steroids as a problem for their sport but denied the drugs are widely used.

McGwire in the past has denied using steroids but under oath repeatedly declined to respond directly. Peering at lawmakers over reading glasses, his goatee flecked with gray, McGwire was pressed to say whether he had taken performance-enhancing substances or whether he could provide details about use by other players. Over and over, he said he wouldn't respond.

All of the players offered condolences to the parents of two young baseball players who committed suicide after using steroids. The parents testified, too, along with medical experts who talked about the health risks of steroids.

"Players that are guilty of taking steroids are not only cheaters — you are cowards," said Donald Hooton of Plano, Texas, whose son, Taylor, was 17 when he hanged himself in July 2003.

CBS Evening News Anchor Bob Schieffer spoke with Dr. Gary Wadler, a sports medicine expert and one of the founders of the World Doping Committee, which polices drugs at the Olympics, about the

According to Wadler, current estimates say between 500,000 and a million youngsters are using these substances.

"This is bad in many many ways," Wadler said. "Some of the effects are permanent, some are reversible, some are predictable, some are unpredictable. For youngsters they may wind up permanently keeping themselves shorter than they otherwise would have been."

President Bush, who in his State of the Union address in 2004 called for a crackdown on steroids, watched the highlights of the hearings, his spokesman said Friday.

Speaking with reporters aboard Air Force One, press secretary Scott McClellan declined to offer support for the congressional effort, saying Bush does not believe that federal intervention is the way to go.

"Baseball has taken important steps to respond to concerns that have been expressed about the use of steroids," he said. "It's important for baseball to continue to take steps to confront the problem."

During a hearing that lasted over 11 hours, lawmakers questioned baseball's new drug-testing plan, including a provision allowing for fines instead of suspensions. A first offense could cost 10 days out of a six-month season, or perhaps a $10,000 fine.

"That's the best we could do in collective bargaining," commissioner Bud Selig said. "The penalties would be much tougher if I had my way."

He added that he would suspend anyone who fails a test, vowing: "There will be no exceptions."

The paneled hearing room was full when the players appeared, with camera crews lining the walls and clogging the aisles. Much of the crowd cleared out when the players left, leaving empty seats for Selig's testimony.

He said the extent of steroids in baseball had been blown out of proportion.

"Did we have a major problem? No," Selig said. "Let me say this to you: There is no concrete evidence of that, there is no testing evidence, there is no other kind of evidence."

Barry Bonds and the New York Yankees' Jason Giambi were not called to the hearing. Both testified in 2003 to a grand jury investigating a steroid-distribution ring, and there were concerns testimony to Congress could hinder the probe.