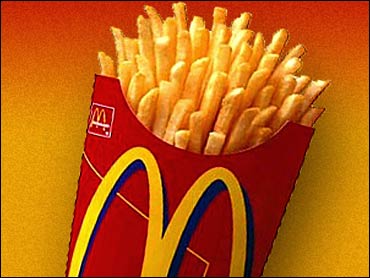 McDonald's Corp. is facing at least three lawsuits related to its disclosure last week that its french fries contain wheat and dairy products.

Debra Moffatt of Lombard, Ill., seeks unspecified damages in a suit filed Friday in Cook County Circuit Court that accuses the company of misleading the public. Her attorney, Thomas Pakenas, said his client has celiac disease that causes gastrointestinal symptoms when set off by eating gluten, a protein found in wheat, barley, rye, and some other grains. Classic symptoms include diarrhea, abdominal pain, gas, bloating and weight loss.

McDonald's said Feb. 13 that wheat and dairy ingredients are used to flavor its fries. Those substances can cause allergic or other medical reactions in food-sensitive consumers.

Earlier this month, McDonald's also acknowledged that its fries contain a third more trans fats than it previously knew, citing results of a new testing method it began using in December.

Jack Daly, McDonald's senior vice president, said in a statement the company has not reviewed the case yet and is testing its fries for gluten through a food allergy research program at the University of Nebraska.

On Friday, Mark and Theresa Chimiak of Jupiter, Fla., sued the fast-food chain, claiming their 5-year-old daughter has an intolerance to gluten. On Wednesday, Nadia Sugich of Los Angeles sued McDonald's, saying she is a vegan and would not have eaten the fries if she had known they contained dairy products.

Until recently, the company had said its fries were free of gluten and milk or wheat allergens and safe for people with dietary issues related to the consumption of dairy items. But this month, the fast-food company quietly added "Contains wheat and milk ingredients" to the french fries listing on its Web site.

The company said the move came in response to new rules by the U.S. Food and Drug Administration for the packaged foods industry, including one requiring that the presence of common allergens such as milk, eggs, wheat, fish or peanuts be reported. As a restaurant operator, Oak Brook, Ill.-based McDonald's does not have to comply but is doing so voluntarily.