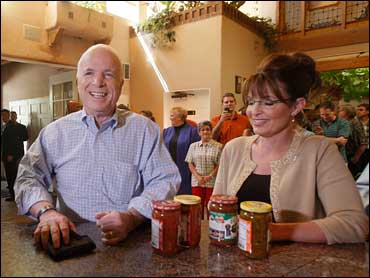 This story was written by Jim VandeHei and Jonathan Martin.


When John McCain's campaign manager said last week that this presidential election "is not about issues," it wasn't a Freudian slip. It was an unvarnished preview of McCain's new campaign plan.

In the past week, McCain - with new running mate Sarah Palin always close by his side - has transformed the Republican campaign narrative into what amounts to a running biography of this new political odd couple.

In McCain's new stump speech and first post-convention ad, the impression his strategists hope to leave is unmistakable. McCain is the war hero. Palin is the Every­mom. And together, they will rattle Washington.

Considering the big challenges the country faces - two wars and a wobbly economy, for starters - the focus on personal narratives might strike some as jarringly superficial for the times.

There is also significant danger for a campaign that emphasizes the personal over policy: The allure of even the most compelling - or unorthodox - life story can fade, begging the question: Where's the beef? For McCain, the answer comes largely in policy positions that mirror those of an unpopular president, and for Palin, her brief time as a public figure prompts many more questions than answers.

But the McCain campaign is betting its best chance to win is by aiming for the gut, not the heads, of voters.

This should not come as a huge shock. For one thing, the political climate pretty much demands it.

The Republican brand is in the tank. And despite all his talk about independent-mindedness, McCain actually differs very little from President Bush on the serious issues of the day: Iraq, taxes, trade and health care.

To win, McCain advisers believe the Republican nominee must distance himself from Bush and even his own party. That isn't easy work.

But they got a solid clue on the best way to pull this off from none other than Barack Obama. They saw how his generalized message of change resonated. So while Obama was busy soft-selling the change portion of his campaign at his convention, McCain was busy stealing it - and busy downplaying the sort of issue-by-issue laundry list Obama delivered in his State of the Union-like acceptance speech.

Politics is also about masking your weaknesses. Let's face it: McCain is not a policy wonk, especially when it comes to discussing domestic issues. He's gotten more comfortable talking about issues such as energy because he's had to this year, but he's much stronger on the nitty-gritty substance of governing only as it relates to his sense of political honor (how, for example, pork-barreling is tied to corruption).

This new approach allows both McCain and Palin to play to their strengths. They both have arresting stories to tell. Not only are they strong in their own right, but the narratives stack up especially well against their opposition. Republicans see the matchup this way:

• Prisoner of war and decorated Navy flier who still bears the wounds of his service versus a first-term senator with a foreign-sounding name and nontraditional background who has never worn the uniform.

• Mother of five and thorn in the side of the "old boys' club" in her home state versus a 65-year-old male senator with 35 years in Washington and a penchant for grandiloquence and self-reference.

Meanwhile, the McCain-Palin team will crow about riding into Washington with six-guns blazing to clean up a dirty town. But beyond clamping down on congressional spending - something Palin didn't make a priority as governor of a state that is legendary for its take from the federal treasury - they offer precious few specifics of how they'll do the deed or how their maverick personas would actually fix rising unemployment levels, energy dependence or hobbled education and health care systems. Still, the campaigning-by-biography plan seem to be working - for now. McCain and Palin are drawing bigger-than-ever crowds and leading in the polls, and even the Republican Party as a whole is seeing an uptick in popularity.

Oddly, it's the vice presidential candidate who seems to be the reason. Does anyone think the convention would have grabbed as large a TV audience without her? Does anyone think voters would be lining the streets and packing crowds without Palin onboard?

The McCain campaign is using Palin's celebrity to sell his biography - and as a means to overcome the Arizona senator's historic reticence to delve into his Vietnam experience. To this end, Palin has become chief testifier to the courage and fortitude McCain demonstrated 40 years ago.

Appearing with the Arizona senator at rallies following the convention, she touted his prescience on the surge in Iraq before focusing unambiguously on what Republicans really want to get across.

"He is the only great man in this race," Palin said flatly before about 15,000 flag-waving Coloradoans in military-heavy Colorado Springs on Saturday.

If that didn't convey the point, she also noted: "It's a long way from the fear and the pain and the squalor of a 4-by-6 cell in Hanoi to the Oval Office."

McCain, Palin noted, is the sort "whose name you'll find on war memorials in small towns all across this great country - only he was among those who came home."

"Since Sen. McCain won't say this on his own behalf, let me say it: There is only one man in this election who has ever really fought for you, and that man is John McCain," Palin said at another large rally outside Detroit on Friday night, drawing loud applause and chants of "John McCain, John McCain."

For his part, McCain has used her reformist image to amplify his, though without the droning details and fine print of McCain-Feingold and the like. "Send a team of mavericks who aren't afraid to go to Washington and break some china," he implored the raucous crowd in Michigan.

But McCain recognizes that Palin's appeal is as rooted in her personal story as it is in her reputation as a reforming politician.

In their first ad featuring Palin, the campaign features a picture of McCain and Palin together as an announcer proclaims, "They'll make history," a clear allusion to her potential to be the first female vice president.

And, in an interview over the weekend with Univision, McCain first cited her political credentials in defending her preparation for the office.

But when asked more open-endedly what Hispanic voters should know about Palin, he went straight for the heart.

"You know, one of the things that Hispanics, in my view, are strongest on are family, family, la familia, and this is a great example," McCain said. "From an oldest son who is about to go to war, to a youngest baby who is so, so perfect and so exceptional with Down syndrome. So, I think you would find that Hispanic people will warm to her and love her the way that other people have known her, again, as the most popular governor in America."

And the thousands of women thronging McCain-Palin rallies since the convention are clearly learning to love her for some of the same reasons.

While some cite her anti-abortion stance, most touch on her authenticity or, more candidly, her gender.

For others - especiall those who brought their daughters and granddaughters out to events and waved "Girl Power" signs - Palin evokes the same sort of Jackie Robinson-like pride based on her gender that Obama does with his race.

Joanne Hannawell of Wauwatosa, Wis., was at a Friday rally in the Milwaukee suburbs. She put Palin's appeal this way: "I think it's time we have a woman involved in higher office."
By Jim VandeHei and Jonathan Martin