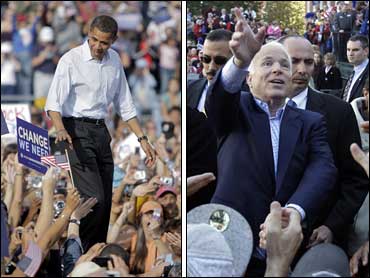 Warmed by the cheers of thousands, John McCain and Barack Obama plunged through the final weekend of their marathon race for the White House, the Republican digging for an upset while his confident-sounding rival told supporters, "We can change this country."

"Yes we can," he added, his slogan across 21 months of campaigning.

Both candidates were backed by legions of surrogate campaigners, door to door canvassers and volunteers at phone banks scattered across the country as they made their final rounds Saturday in a race that carried a price tag estimated at $2 billion.

Obama, ahead in the polls, maintained his stride despite news that an aunt from Kenya, Zeituni Onyango, lives in the U.S. illegally. The Democratic candidate "has no knowledge of her status but obviously believes that any and all appropriate laws be followed," said a written statement given to The Associated Press.

Campaign strategist David Axelrod added, "I think people are suspicious about stories that surface in the last 72 hours of a national campaign."

McCain made no mention of Obama's relative, but he worried aloud about the consequences of Democrats winning the White House while maintaining control of Congress. He warned of an agenda that "apparently ... starts with lowering our defenses and raising our taxes."

He contended that Obama was "running for redistributor in chief, I'm running for commander-in-chief."

The Republican spent much of the day in Virginia, trying to make up ground in a state that has not voted Democratic since 1964 but leans that way now. "We're a few points down but we're coming back," he said. "I'm not afraid of the fight, I'm ready for it and you're going to fight with me." (Read more on the race in Virginia)

On Sunday and Monday, the last two days before election day, McCain will campaign in nine battleground states, reports CBS News correspondent Chip Reid. Of those, seven voted for George W. Bush in 2004; only Pennsylvania and New Hampshire did not.

In Wyoming today, Vice President Dick Cheney said McCain is "the right leader for this moment in history."

"John is a man who understands the danger facing America," Cheney said. "He's a man who has looked into the face of evil and not flinched. He's a man who's comfortable with responsibility and has been since he joined the armed forces at the age of 17. He's earned our support and confidence, and the time is now to make him commander-in-chief."

Obama's referenced Cheney's comments at an appearance in Pueblo, Colorado late this afternoon.

"I'd like to congratulate Senator McCain on this endorsement because he really earned it," Obama said, according to prepared remarks. "That endorsement didn't come easy. Senator McCain had to vote 90 percent of the time with George Bush and Dick Cheney to get it. He served as Washington's biggest cheerleader for going to war in Iraq, and supports economic policies that are no different from the last eight years. So Senator McCain worked hard to get Dick Cheney's support."

Obama was in Nevada, then Colorado and Missouri today, all states that voted for President Bush four years ago.

"We have a righteous wind at our back," he told one audience.

In Nevada, a state hard-hit by the a mountain of foreclosures, Obama pounded away on his economic message, reports CBS News correspondent Dean Reynolds. Roughly a third of the 1.2 million registered voters in the state have already cast ballots - a potential positive for the Obama campaign, according to the latest CBS News poll on early voting trends.

But the McCain campaign is pointing to a new Associated Press poll showing that one out of seven voters have yet to make up their minds.

CBS News' John Bentley reports that McCain's campaign manager, Rick Davis, sent out a memo to supporters and the press outlining their path to 270 electoral votes, which includes their hope that they can persuade a large number of undecided voters.

Referring to the AP poll, Davis wrote: "That means, if 130 million voters turn out on Tuesday, 18.5 million of them have yet to make up their mind." (Read more in From The Road)

McCain's hopes of an upset hinged on winning all or nearly all the states that carried Bush to victory in 2004, and possibly carrying Pennsylvania to give him a margin for error.

Apart from the presidential campaign, Democrats confidently predicted they would add to their majorities in the House and Senate.

Senate Republican leader Mitch McConnell of Kentucky was in a close and costly battle for re-election.

But so was Democratic Rep. John Murtha, several days after describing his southwestern Pennsylvania constituents as racists. Democrats arranged for former President Clinton to campaign for the anti-war lawmaker in hopes of saving his seat.

Bush was nowhere near the campaign crowds as the election neared, and McCain wouldn't have it any other way, given low presidential approval ratings.

Like Obama and McCain, the vice presidential running mates campaigned toward the finish line.

Sen. Joe Biden was in Indiana, another traditionally Republican state where Democrats are running hard. He accused Republicans of "trying to take the low road to the highest office in the land. They are calling Barack Obama every name in the book."

Republican Sarah Palin, in New Port Richey, Fla., said Biden had it backwards - it was the Democrats who were resorting to unseemly tactics.

"Barack Obama goes around promising a new kind of politics, then he comes here to Florida and tries to exploit the fears and worries about Social Security and Medicare for retirees, and that's the oldest and cheapest kind of politics there is," she said.

The rhetorical flourishes were merely the most visible aspect of the late-campaign effort.

McCain's campaign said it was reaching more voters than Bush's re-election campaign did at this point four years ago, more than one million a day. Volunteers in reliably Republican states like Utah were bused to nearby battlegrounds like Nevada.

Democrats had a similar plan. Volunteers in Maryland were told they were needed in Virginia.

Early voting statistics were large, and tilted Democratic. In North Carolina, officials said 2.3 million ballots had been cast as of Saturday morning, 52 percent of them by Democrats and 30 percent by Republicans.

In Missouri, spokesman Justin Hamilton said Obama's campaign had agreements with cab companies across the state to provide Election Day rides to the polls for any voter who wanted one.

He said the callers would not be asked how they intended to vote.