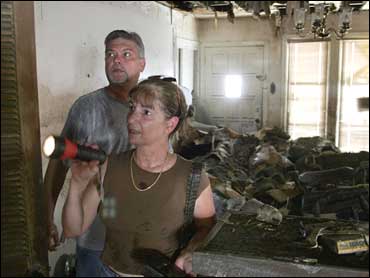 Under pressure from President Bush and other top federal officials, the mayor Monday suspended the reopening of large portions of the city over the next few days because of the risk of a new round of flooding from a tropical storm.

"I am concerned about this hurricane getting in the gulf. ... If we are off, I'd rather err on the side of conservatism to make sure we have everyone out," Mayor Ray Nagin said.

The announcement came after repeated warnings from top federal officials — and the president himself — that the city was unsafe. The mayor reversed course even as residents began trickling back to the first neighborhood opened as part of Nagin's plan, the scarcely damaged Algiers section.

The news came as the state Health Department raised the death toll from Hurricane Katrina in Louisiana by 90 to 736. The toll across the Gulf Coast was 973.

The mayor said he had wanted to reopen some of the city's signature neighborhoods over the coming week in order to reassure the people of New Orleans that "there was a city to come back to." He said he had strategically selected ZIP codes that had suffered little or no flooding.

But "now we have conditions that have changed. We have another hurricane that is approaching us," he said. He warned that the city's pumping system was not yet running at full capacity and that its levee system was still in a "very weak position."

He urged everyone already settled back into Algiers to be ready to evacuate as early as Wednesday.

Tropical Storm Rita was headed toward the Florida Keys and was expected to become a hurricane, cross the Gulf of Mexico and reach Texas or Mexico by the weekend. But forecasters said it could also veer in Louisiana's direction.

"We're watching Tropical Storm Rita's projected path and, depending on its strength and how much rain falls, everything could change. Residents moving into the area may have to evacuate again," Col. Duane Gapinski, commander of the Army Corps of Engineers task force that is draining New Orleans and repairing the levees.

Under the mayor's plan, Algiers opened Monday, and the Uptown neighborhood, the Garden District and the historic French Quarter were supposed to reopen one ZIP code at a time between Wednesday and next Monday, bringing a total about 180,000 of New Orleans' half-million inhabitants back.

The dispute (video report)
over the reopening was just the latest example of the lack of federal-local coordination that has marked the disaster practically from the start.

Nagin saw a quick reopening as a way to get the storm-battered city back in the business of luring tourists. But federal officials warned that such a move could be a few weeks premature, pointing out much of the area does not yet have full electricity and still has no drinkable water, 911 service or working hospitals.

With the approach of Rita, Mr. Bush added his voice, saying he had "deep concern" about the possibility that New Orleans' patched-together levees could be breached again.

In addition, Mr. Bush said there are significant environmental concerns. New Orleans still lacks safe drinking water, and there are fears about the contamination in the remaining floodwaters and the muck left behind in drained areas of the city.

"The mayor — you know, he's got this dream about having a city up and running, and we share that dream," the president said. "But we also want to be realistic about some of the hurdles and obstacles that we all confront in repopulating New Orleans."

Mr. Bush said White House chief of staff Andrew Card had been pressing the matter with Nagin. The concerns were echoed by the top federal official in charge in New Orleans, Coast Guard Vice Adm. Thad Allen, who went on one news show after another to warn that city services may not be able to handle the influx of people.

"Everybody wants the city of New Orleans to be restarted," Allen said Monday on CBS News' The Early Show. "The mayor has a vision. We agree with that vision. The discussion we're having with the mayor is over the timing of re-entry and how to do it safely."

"We've done an assessment of things like sewer, portable water, telephone systems, 911 response and so forth," Allen said. "There is general concurrence among the folks that are working this problem that the conditions have been met for re-entry."

Before reversing course Monday, a clearly agitated Nagin snapped that Allen had apparently made himself "the new crowned federal mayor of New Orleans."

About 20 percent of the city is still flooded, down from a high of about 80 percent after Katrina, and the water was expected to be pumped out by Sept. 30.

But officials with the Army Corps of Engineers said the repairs to levees breached by Katrina are not yet strong enough to prevent flooding in a moderate storm, much less another hurricane.

At an Interstate 10 checkpoint of traffic heading into the city from the north, cars were backed up for two hours. Tractor-trailers, emergency vehicles and National Guard trucks shared the highway with cars towing trailers full of hurricane gear and pickup trucks with their beds loaded with water, cleaning materials and coolers.

It was clear that at least some of the traffic was headed to sections of the city that have not yet officially opened.

Algiers, a neighborhood of 57,000 just across the Mississippi River from the French Quarter, is home to many of the companies that make floats for Mardi Gras parades. Unlike much of the rest of the city, it saw little damage from Hurricane Katrina three weeks ago and has electricity and drinkable water.

"Obviously we need to get businesses up and running any way we can," said Barry Kern, whose float businesses is stocked to the rafters with oversized imaginary creatures. "If we don't start somewhere, where do we start?"

He said he recognized that the city might be unfit for children, but that there are key businesses that need to be reopened, like his, so that people can start making money and the city can get back on its feet.

Elsewhere across the city, where the damage was much more severe, much of the sentiment seemed to be with the mayor.

"Send Bush here and we'll make him a po' boy and tell him to leave us alone," Kathleen Horn said as she cleaned up the debris piled in front of Slim Goodies Diner on Magazine Street in Uptown.

Asked if the prospect of living in a dark, largely deserted city scared her, Uptown resident Ann Harrington said: "Not if you're a New Orleanian. If you live here, it takes a lot more than a dark night to scare you."

On Bourbon Street in the French Quarter, Del Juneau opened his lingerie and adult-novelty shop, Bourbon Strip Tease, for the first time since the storm. He was frustrated with city officials' indecision about when to formally reopen the quarter.

"Just let the people come and do their own cleanup," he said. "We'd all be better off."