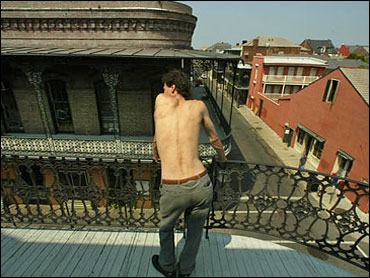 Bars, restaurants and shops had just begun showing signs of life when the mayor once again ordered everyone to leave town as a new tropical storm headed toward the Gulf of Mexico, bringing the threat of more flooding.

The call for another evacuation came after repeated

warnings from top federal officials (video)
— including President Bush himself — that New Orleans was not safe enough to reopen. Federal officials warned that Tropical Storm Rita could breach the city's weakened levees and swamp the city all over again.

Mayor Ray Nagin told The Early Show's Hannah Storm that despite other federal criticism of the city's lack of complete infrastructure, bracing for Rita motivated him to call for a re-evacuation.

"You know, from my perspective, pressure is dealing with a city that's under sea level and that's facing its second hurricane in three weeks," Nagin said. "So ... the issue is Rita."

also told Storm (video interview)
that he did not think it would be necessary to enforce the renewed evacuation order. But some business owners who started selling cleaning supplies and serving po' boys wanted to stay put.

So did some returning residents. On The Early Show, CBS News correspondent Randall Pinkston spoke with Tyrone McCallon, whose family had set foot back in New Orleans after staying with relatives in Alabama, only to be told to leave.

"When I get here, they say leave again," McCallon said. "I just got here 10 minutes ago."

Del Juneau, owner of a Bourbon Street lingerie shop in the once-raucous French Quarter, said it would be premature to order another evacuation based on the storm nearing Florida. "Where are you going to go? What are you going to do?" he said. "I'm not going anywhere."

The death toll in Louisiana spiked by 90 to 736 on Monday, as receding floodwaters allowed search and recovery crews to accelerate their probes into the city's decimated neighborhoods. The toll across the Gulf Coast was 973.

Due to lingering health and urban infrastructure concerns, federal officials began to question the mayor's plan to bring 180,000 residents back to New Orleans by the end of the month even before the threat of Rita emerged. Even President Bush weighed in, Pinkston reports.

"We share that dream, but we want to be realistic," Mr. Bush said.

President Bush made his fifth trip to the Hurricane Katrina zone Tuesday to get an on-the-ground briefing on Rita and to visit a business trying to get back on its feet.

As Air Force One landed again on the Gulf Coast, Americans were watching. As CBS News correspondent Gloria Borger

reports (video)
, new polls coming out today show the president's poll numbers just dipping as low as they've been thus far in his time in the presidency. On The Early Show, Borger said the most important thing to this president has always been his leadership rating.

The mayor reversed course even as residents began trickling back to the first neighborhood opened as part of Nagin's plan, the lightly damaged Algiers section.

"Now we have conditions that have changed. We have another hurricane that is approaching us," Nagin said. He warned that the city's pumping system was not yet running at full capacity and that the levees were still very weak.

Nagin ordered residents who slipped back into the still-closed parts of the city to leave immediately. The city requested 200 buses to assist in an evacuation. Nagin told CBS News that if Rita does not strike hard, residents should be allowed to return to New Orleans by the middle of next week.

Tropical Storm Rita was headed toward the Florida Keys and was expected to become a hurricane, cross the Gulf of Mexico and reach Texas or Mexico by the weekend. But forecasters said it also could veer toward Louisiana and New Orleans' weakened levees.

"We're watching Tropical Storm Rita's projected path and, depending on its strength and how much rain falls, everything could change," said Col. Duane Gapinski, of the Army Corps of Engineers task force that is draining New Orleans and repairing the levees.

Brig. Gen. Robert Crear said the Corps hopes to have the levees back to being capable of handling a Category 3 storm by June 2006, the start of the next hurricane season.

The dispute over the reopening was just the latest example of the lack of federal-local coordination that has marked the disaster practically from the start.

And other towns along the Gulf Coast are not attracting so much federal attention. For more than a week, Pearlington, Miss., has survived largely on its own. Ten days after Hurricane Katrina annihilated this tiny hamlet on the Louisiana state line, Jeff McVay and five other members of a state emergency response team from Walton County, Fla., arrived at the request of Hancock County.

They were stunned by what he found. There was no shelter. He called home and asked for six more men. Pearlington's homes are heaps of debris, shoved far from their foundations. And people — maybe 600 of the town's 1,700 — are still living in tents and under tarps.

In New Orleans, Nagin saw a quick reopening as a way to get the storm-battered city back in the business of luring tourists.

But federal officials warned that such a move could be a few weeks premature, pointing out that much of the area does not yet have full electricity and still has no drinkable water, 911 service or working hospitals.

With the approach of Rita, Mr. Bush added his voice, saying he had "deep concern" about the possibility that New Orleans' levees could be breached again.

"The mayor — you know, he's got this dream about having a city up and running, and we share that dream," the president said. "But we also want to be realistic about some of the hurdles and obstacles that we all confront in repopulating New Orleans."

In Washington, Republicans are looking for ways to trim budgets as Democrats rail the GOP's tax cuts for the wealthy. At least one senator is considering a major budget item slash in order to pay for the damage caused by Katrina.

"Look, everything has changed," McCain said. "We didn't anticipate around $200 billion expenditure of taxpayers dollars a month ago."