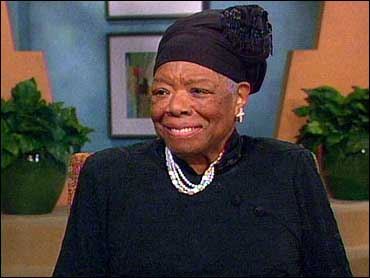 "I wish I was writing a poem right this minute," the tireless Dr. Maya Angelou told The Early Show co-anchor Harry Smith.

It's that dedication to her art that makes the legendary poet the perfect choice to be the first African-American woman and living poet to be featured by the celebrated "Poetry for Young People" series from Sterling Publishing.

Normally, Angelou said, the editors chose poets who are "dead and old and white."

"There have been two women, Emily Dickinson, and one black, Langston Hughes, before me," she said. "But the rest of the people, mostly are Europeans, Englishmen. And so I'm laughing at the other sleeve."

The book features 25 of Angelou's poems as well as gorgeous illustrations to accompany them.

As much for her poems, Angelou is also known for her voice. She recited a poem she wrote specifically for the occasion at President Bill Clinton's first inauguration.

The poem was about hope and possibility, but now recent events -- like the Jena 6 in Louisiana -- seem to indicate that race relations remain strained.

2It's important, said Angeleou, for people to believe that they, as individuals, have the power to make a change.

"I don't want them to think that with the lives and deaths of Martin Luther King and Malcolm X and the Kennedys, that they weren't able to make any change," she said.

Angelou read part of her most famous poem, "Still I Rise," which has become an American classic and is included in the book:

"You may write me down in history
With your bitter, twisted lies,
You may trod me in the very dirt
But still, like dust, I'll rise.
Out of the huts of history's shame
I rise
Up from a past that's rooted in pain
I rise
I'm a black ocean, leaping and wide,
Welling and swelling I bear in the tide.
Leaving behind nights of terror and fear
I rise
Into a daybreak that's wondrously clear
I rise
Bringing the gifts that my ancestors gave,
I am the dream and the hope of the slave.
I rise
I rise
I rise."