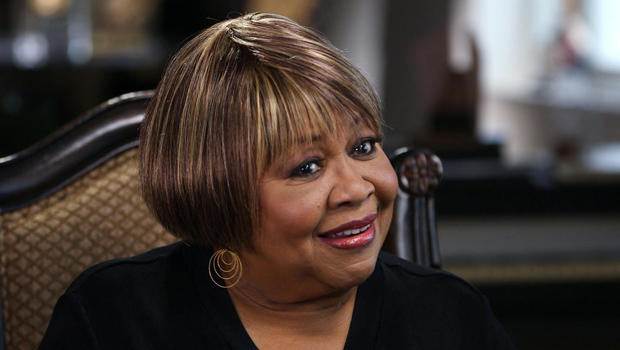 For the little girl with the big voice from the South Side of Chicago, it’s been an unforgettable journey.

Mavis Staples has been singing since the 1940s. She was nominated for her first Grammy in 1961, and has won three in her career.

Staples and her family band were inducted into the Rock and Roll Hall of Fame in 1999, and this month the Kennedy Center honored her for her contribution to American culture.

By the time the Staple Singers reached the top of the pop charts in the early 1970s, Mavis Staples had already been singing for nearly 25 years.

Mavis was just eight when her father, Roebuck (or “Pops”), put together the family band with siblings Cleotha and Pervis (and later, Yvonne): “And he called us children into the living room, sit us on the floor in a circle. He said, ‘We gonna sing.’”

Mavis, with her deep contralto, would take the lead.

Billed as “God’s greatest hitmakers,” the Staples would become stars of the gospel circuit.

Mason asked, “When did you realize you had something special?”

“You know, I realized it before we made a record. We would sing in church. And they’d come up to the pulpit, they’d come up and they’d be crying. And they wanted to shake my hand, and put money in my hand. That’s when I knew I had something. Something was going on!”

The Staple Singers, based in Chicago, traveled without a rhythm section -- just Pops on guitar. “Elvis Presley once told me one time, he says, ‘I like the way your father’s guitar sounds.’  ‘I say, ‘Well, thank you.’ He said, ‘Yeah, yeah, yeah. He sounds nervous, ‘cause he plays a nervous guitar.’”

Another king admired the group’s music: In the early 1960s, Dr. Martin Luther King, Jr. invited the Staples Singers to travel with him. Their music would become the soundtrack to his civil rights crusade: “I walked beside Dr. King, and I sang songs for him,” Staples said. “That makes me proud.”

In 1964, the Staples were invited to the Newport Folk Festival, which introduced them to a broader audience.

But things really changed in the late sixties when their new label, Stax Records, put a rhythm section behind them -- and in 1972 “I’ll Take You There” took them to #1.

Mason asked, “How did it feel when you suddenly broke mainstream?”

“You know, it felt good,” she replied. “We were finally being heard.”

Mavis’ distinctive voice continues to attract all-star collaborators. Wilco’s Jeff Tweedy produced a Grammy-winning album for her, “You Are Not Alone.” Before that, Prince wrote two albums for her.

And before that, another songwriter had an even stronger attraction to Mavis. It was 1962. She and Bob Dylan met on a television show. Dylan would propose marriage; Mavis would decline.

“Anthony, why you wanna do that! See, you made me sigh.”

“Did you ever explain to him why you turned him down?”

“I told him we were too young,” she said.

But this past summer Dylan invited Mavis to open for him on tour.

At 77, Mavis Staples is still touring regularly, singing a mix of the Staples Singers hits, new Mavis music, and some covers.

Her remarkable, nearly seven-decade career was honored this month at the Kennedy Center. For Mavis, the only thing missing was her father.

When asked what she thinks Pops would have made of her receiving the Kennedy Center Honor, Mavis said, “I tell you, he’d have that twinkle in his eye. ‘Mavis. Mavis, girl, they honoring you!’”

Pops Staples died in 2000. She called it the hardest time of her life. They had sung together for more than 50 years.

“And he would tell me, ‘Mavis, you don’t have to sing loud. You don’t need no gimmicks. Sing from your heart. What comes from the heart reaches the heart.’ I said, ‘Okay, daddy.’ And I go in that dressing room, I say my little prayer, I go to my heart, and start singing. That’s the best advice he could ever have given me -- ‘Sing from your heart.’

“It works every time,” she sighed.

Check out our profiles of this year’s other Kennedy Center Honorees, including James Taylor and Don Henley of The Eagles.

The Kennedy Center Honors, hosted by Stephen Colbert, will be broadcast on CBS on December 27 at 9 p.m. ET/PT.