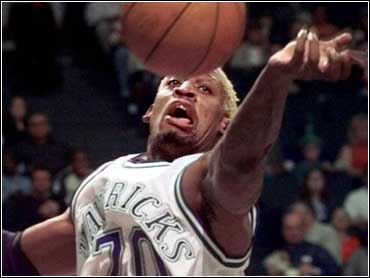 Dennis Rodman's Dallas teammates picked up the rebounding slack after the eccentric forward fouled out.

The Mavericks were able to gain possession after four Denver misses in the final 2:21 as Dallas held off the Nuggets 98-96 on Saturday night.

"When Dennis fouled out, we knew we had to stay together and rebound as a team," said Mavericks guard Robert Pack, who had 22 points and 12 assists.

"He was really doing his job out there on the boards but after he left, we got a couple of tough rebounds with the game on the line. This was a real good win for us. We've struggled in close games."

Rodman was called for his fifth technical in six games with the Mavericks in the third quarter when he complained about a foul call. He had 14 rebounds and matched his season high with six points, all in the first quarter, in 35 minutes.

"Everybody had to step up," Finley said. "We made some big defensive stops and got some big rebounds."

After the game, Rodman continued to complain about the officiating, something he's done after each home game.

"I wanted to do well, but the referees all treat me like somebody off the street looking for a handout," Rodman said as he hurried down a Reunion Arena corridor.

"It's unfair. I've proven myself in this league. I go out there and play hard and the referees put me on the bench with fouls."

Pack missed a 20-footer with seven seconds to go to give the Nuggets an opening, but Bryant Stith missed a 3-pointer at the buzzer to give the Mavericks only their second victory in Rodman's six games with the team.

Stith said the first option on the last play was to go for a layup and the tie. When Nick Van Exel's path was blocked, he passed to Stith, who worked open for the 3-pointer.

"I had a wide-open shot and a good look at a 3-pointer to win the game," Stith said. "I just didn't get it over the front iron."

Mavericks coach Don Nelson said his team was fortunate to escape with the victory after a defensive breakdown on the last shot.

"We deserve a little break because we haven't gotten any all year," Nelson said. "We'll take it and not worry about it."

Antonio McDyess had 22 points and Clark added 20 for the Nuggets, who had won three of their previous four. Van Exel had 17 points and 12 assists, but was 6-for-21 from the field.

In the first quarter, connecting on two layups and converting both of his free throws. Rodman took only three shots in the game.

Rodman was fined $3,500 by the NBA for failing to leave the court in a timely manner after he was kicked out of Thursday night's game against Utah.