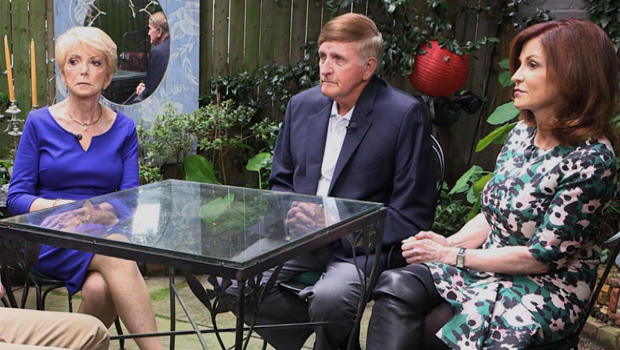 Maureen Dowd of The New York Times has plenty to say about Clinton vs. Trump.  And not surprisingly, she’s found she can’t please everyone, as she reveals to Mo Rocca in a round of Questions-and-Answers:

When asked if she ever reads the comments to her articles, New York Times columnist Maureen Dowd replied, “Never.”

And not looking at reader feedback is probably a wise decision. “I’m always making one side or the other angry,” she told Rocca. “I’m really shy and kind of introverted, but when I write it has to be the tougher part of myself, because that’s my job.”

And her job during this presidential campaign has been hitting both sides -- hard.

She’s excoriated Hillary Clinton for “her long pattern of ethical slipping and sliding.”

As for Donald Trump and his performance in last Wednesday’s debate: “The fact that she was able to goad him into calling her a nasty woman when she was expressing the intricacies of Social Security and taxes is a triumph of psychological warfare.”

Her new book, “The Year of Voting Dangerously” (Hachette), includes many of her columns … and none of those comments.

And why wouldn’t she read the comments? “Oh, they would hurt my feelings!” she laughed. “When I was little I was so overly sensitive. I actually thought that if someone said something mean to you, it would get in your bloodstream, and it would be like leukemia and you would die.”

She may not read her comments, but Peggy Dowd does -- always at the ready to stick up for her little sister.

“No one better say anything to me about Maureen,” Peggy said. “I read all of her comments. And I get very angry sometimes.”

“It’s like being in a ‘Godfather’ movie,” said Maureen. “You take one of theirs, they take one of yours. You go to the mattresses.”

This is Dowd’s ninth presidential campaign. But this time around, she says, the national mood is uniquely terrible.

“There have been a lot of stories that couples are breaking up all over the country,” Maureen said.

Rocca noted, “A friend of mine, his wife said to him -- they’ve been married for over 20 years -- she said, ‘Seriously, if you vote for Trump, I will divorce you.’ Have you ever seen anything like this?”

“No,” she replied. “People feel very intensely that if Donald Trump gets elected we’re going to have the zombie apocalypse, you know? And then my siblings feel just as strongly that, if Hillary gets in, there will be the abyss.”

That’s right: Maureen’s brother, Kevin, is a rock-ribbed Republican who occasionally invades his sister’s column space to hurl slabs of red meat at her defenseless readers.

“I particularly like the comments that come in afterwards,” Kevin said.

So, you read the comments? “Oh, I keep a scrapbook of them!” he laughed.

And so does Maureen’s sister, Peggy: She embodies change. She cast her first vote for conservative Barry Goldwater; then made her way left with Jimmy Carter; then tacked right again for Reagan and both Bushes. This election, she’s leaning Trump. But …

“She went to Cuba for a vacation and fell in love with Che Guevara and turned Communist for three days,” Maureen noted. “So anything can happen.”

“You’re a pretty solid conservative, but you had this dalliance with Communism,” Rocca said.

“Exactly. When you were a Bernie Sanders voter?” Rocca asked.

“I did vote for Obama,” Peggy admitted.

Maureen Dowd grew up the youngest of five in a tight-knit Irish-Catholic family in Washington, D.C. Her father was a police inspector in charge of Senate security. He got to see the members of that august body in some of their less august moments.

“He had the worm’s eye view, so these politicians were not trying to impress him,” Maureen said. “And my brothers were pages there as well. They would see the nitty-gritty. They would see Senators come in in the morning drunk.

“And then other Senators’ wives would be calling saying, ‘Where’s my husband? Where’s my husband?’ You know, ‘cause there was a lot of hanky panky in those days. So my father tended to judge politicians on whether they seemed to be good people rather than by party so much, although he was a Democrat.”

Indeed, Dowd’s column focuses less on policy and more on the person.

Rocca said, “You’ve heard the charge that you and your legions of imitators, by focusing so much on character and personality, have trivialized the process.”

“I think it’s just the reverse,” Dowd responded. “Whenever America has had a trauma, whether it’s Watergate or Vietnam or Iraq, if you look back, those decisions were made on the basis of the president’s personality or personal demons.”

Dowd met Donald Trump in the late 1980s, and admitted early this campaign that covering him might mean “he would send out one of his midnight mordant tweets about me, something like ‘she started as a 3. Now she’s a 1.”

“I knew that he would cut me off, ‘cause I would be honest,” she said. “And he tweeted that I was a neurotic dope, and I was ‘wacky’ and ‘crazy.’”

“I was very hurt, because I thought he could have come up with something much more customized. Spent more time on it. Like, Elizabeth Warren has ‘Pocahontas.’ So I was very hurt. I thought I was special!”

“Yes, a banshee! That would have been perfect.”

She’s been writing about the Clintons for 25 years, winning a Pulitzer for her commentary on the Lewinsky scandal and impeachment crisis.

“Hillary has these two sides that are in conflict,” Dowd says of Hillary. “So the dark side -- where she’s fearful and paranoid and secretive and has a lot of scar tissue from all these battles that she’s fought, and from her husband, fighting his battles with the women who have come forward -- trips up the light, idealistic side that she started with at Wellesley.”

“Even my family doesn’t understand. When a Republican president is in they don’t talk to me for four or eight years ‘cause they’re mad that I’m critiquing. And then when a Democrat is in [and I’m critiquing them], they love it.”

But her family is always her personal focus group.

“It’s so funny, because all of my fellow Times columnists have been going on these Margaret Mead road trips,” Dowd said. “‘We’re gonna find this strange, exotic creature called the Trump voter, and try and understand who they are, and reason with them.’ And all I have to do is go home. They’re my own little ‘basket of deplorables.’”

And if this campaign has created strife in some families, the Dowds are taking it in stride.

“I’ve been married for 42 years to a registered Democrat,” Kevin laughed. “So you oughta see counseling if you can’t sort this out.”

Maureen said, “There was more tension in our household when W. was President.”

“I was almost a fanatic for him,” Peggy said. “If Maureen wrote any criticism of him, I just went nuts.”

“I did! [But] after he got into the White House, and years later, I thought, ‘This is ridiculous, you know? If I’m dyin’, he isn’t going to be at my bedside; Maureen will.’”

Five years ago a 9.0 mag earthquake and tsunami devastated eastern Japan in 2011