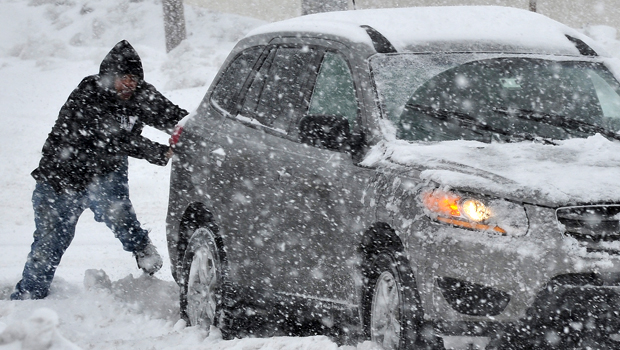 PHILADELPHIA -- The latest storm to roll off nature's assembly line this bustling winter spread heavy snow and sleet along the Northeast corridor Thursday, while utility crews in the ice-encrusted South labored to restore power to hundreds of thousands of shivering residents.

About 1.2 million homes and businesses lost power as the storm moved from the South through the Northeast.

By Thursday afternoon, about 550,000 customers remained without power, mostly in Georgia andSouth Carolina.

The sloppy weather shuttered schools and businesses, made driving scary, grounded more than 6,500 flights on Thursday alone and created more back-breaking work for people along the East Coast, where shoveling out has become a weekly chore - sometimes a twice-weekly one.

Baltimore awoke to 15 inches of snow. Washington, D.C., had at least 8, and federal offices and the city's two main airports were closed.

Philadelphia had nearly 9 inches, making it the fourth 6-inch snowstorm of the season - the first time that has happened in the city's history. New York City received nearly 10 inches. Parts of New Jersey had over 11. The Boston area was expecting 4 to 6, while inland Connecticut and Massachusetts were looking at a foot or more.

In New Cumberland, Pa., Randal DeIvernois had to take a rest after shoveling his driveway. His snow blower had conked out.
"Every time it snows, it's like, oh, not again," he said. "I didn't get this much snow when I lived in Colorado. It's warmer at the Olympics than it is here. That's ridiculous."

At least 21 deaths, most of them in traffic accidents, were blamed on the storm as it made its way across the South and up the coast.
Among the victims was a pregnant woman who was struck and killed by a snowplow in New York City. Her baby was delivered in critical condition via cesarean section.

The dead also included a man hit by a falling tree limb in North Carolina and a truck driver in Ashburn, Va., who was working to clear snowy roads. He was standing behind his vehicle when he was hit by a dump truck.

Across the South, the storm left in its wake a world of ice-encrusted trees and driveways and snapped branches and power lines.

About 750,000 homes and businesses were left without power in Georgia, South Carolina, North Carolina and Alabama, with scattered outages reported in the mid-Atlantic.

More than 200,000 households and businesses in the Atlanta area alone were waiting for the electricity to come back on. Temperatures were expected to drop below freezing again overnight.

In North Carolina, where the storm caused huge traffic jams in the Raleigh area on Wednesday as people left work and rushed to get home in the middle of the day, National Guardsmen in high-riding Humvees patrolled the snowy roads, looking for any stranded motorists.
CBS News correspondent Wyatt Andrews reports from Raleigh that state troopers responded to more than 2,000 accidents, with one car even bursting into flames.

Daniel Smith found shelter at the Midway Baptist Church after his car got stuck on an icy hill.

"It was something out of like a zombie movie or something, all these abandoned cars on the side of the road," Smith told Andrews.

Like many, Smith had heard all of the warnings, but the speed and the power of the storm caught him by surprise.

"We knew the forecast," said Smith. "We knew it was going to be bad, but we thought, you know, once it starts to come down we'll head home and be fine."

Some roads around Raleigh remained clogged with abandoned vehicles Thursday morning. City crews were working to tow the vehicles to safe areas where their owners could recover them.

By late Thursday morning, parts of northern Georgia had over 9 inches of snow, while North Carolina ranged from 6 inches in cities to up to 15 inches in mountainous areas. Parts of Virginia, Maryland and Pennsylvania were reporting 15 to 18 inches.
Pat O'Pake, a Pennsylvania Department of Transportation plow operator with more than 20 years on the job, began his grueling 12-hour shift at midnight, plying a stretch of Interstate 78 in Berks County.

"It's like a dog chasing its tail all day," O'Pake said as he drove his 14-ton International at a steady 37 mph. "Until it stops snowing, and then we'll catch up at the end. We always do. It just takes a while."

The procession of storms and cold blasts - blamed in part on a kink in the jet stream, the high-altitude air currents that dictate weather - has cut into retail sales across the U.S., the Commerce Department reported Thursday. Sales dipped 0.4 percent in January.

"It's been a tough winter. It seems like it will never end," said Deb Ragan, clearing a sidewalk in downtown Philadelphia.

On the National Mall in Washington, 8-year-old Lucas Moore was out having fun with his father and thinking about how all the snow days he has had this year may come back to haunt him.

"If they do cut into summer, I'm going to be, like, really mad and trying not to go to school," he said. "When it's summer, play time."

In New York City, the teachers union and TV weatherman Al Roker blasted Mayor Bill de Blasio's decision to keep the schools open. Roker, who was in Russia for the Winter Olympics but has a daughter in New York's public schools, said on Twitter: "It's going to take some kid or kids getting hurt before this goofball policy gets changed."

The mayor said many parents depend on schools to watch over their children while they are at work.

"It's a godawful thing," said Mike Flood, owner of Falls Church Florist in Virginia. "We're going to lose money, there's no doubt about it."