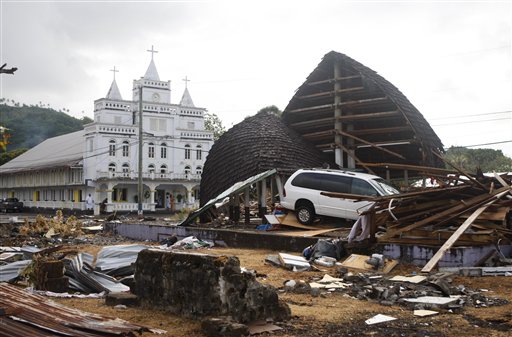 A powerful earthquake ripped through western and central Mexico, killing at least 23 people, collapsing dozens of houses and leaving the worst-hit state shrouded in darkness with power outages.

The death toll continued to rise Wednesday as emergency crews surveyed the full extent of the damage hours after the ground had stopped shaking from the quake, which centered near the port and tourist center of Manzanillo.

The government declared a state of emergency in Colima state, where television images showed walls collapsed into heaps in the capital and cars crushed by bricks and concrete. Nearly all of the state, where Manzanillo is located, remained without electricity or telephone service.

The quake, which struck at 8:07 p.m. Tuesday evening, leveled 40 homes and left more than 100 people homeless in Guadalajara, Mexico's second largest city 100 miles to the north, and shook buildings in the capital, Mexico City, 300 miles away.

Mexico's national seismological service put the quake's magnitude at 7.6, but the U.S. Geological Survey calculated it at 7.8. A magnitude 7 quake is capable of causing widespread, heavy damage.

"Because of the size of the earthquake and its shallow depth, USGS is expecting substantial damage," said U.S. Geological Survey spokesman Butch Kinerney.

Adan de la Paz of the Mexican Red Cross said 21 people had died in Colima state. In neighboring Jalisco state, two people were killed — an 85-year-old woman who was crushed by a wall as she fled her house and a 1-year-old girl who died in the same town, Zapotitlan.

Colima Gov. Fernando Moreno Pena said most of the deaths in his state had occurred in the capital city, also called Colima. He did not provide details, but radio reports said most of the victims died after portions of office and residential buildings collapsed near the center of Colima City.

State officials were apparently worried that more victims may be trapped in the rubble of collapsed buildings in Colima.

The governor of Jalisco sent to Colima state a team of 24 people "specially trained in rescuing people missing or trapped in rubble in this kind of tragedy," said Trinidad Lopez Rivas, Jalisco civil defense director.

President Vicente Fox ordered the military to search for damage near the quake's epicenter, a region that included remote villages in coastal areas of Jalisco and Colima.

The quake swayed buildings, briefly knocked out power and telephone service and sent panicked residents running into the streets in Mexico City, but officials said there were no reports of deaths or serious damage there.

"Fortunately there does not appear to be generalized damage in the city," Mexico City Police Chief Marcelo Ebrard told reporters.

Immediately after the quake, police cars drove slowly through the streets of Mexico City with sirens flashing, asking people over loudspeakers: "Is everything OK?"

They encountered residents gathered in small groups, many shaking with fear. Others raced outside so quickly that they had no shoes to cover their bare feet or had grabbed little more than a blanket to guard against the night's chill.

"I felt it very strongly and I saw all the people leave, very scared," said Victor Morales, a 46-year-old apartment building superintendent in the Condesa neighborhood. "I stayed calm because I trust in God."

Some earthquakes of magnitude 7 have caused massive damage, but the effect of a quake can be affected by many factors, including its depth and the sort of earth through which it passes as it moves away from the epicenter.

Mexico City is built atop a former lake bed in a mountain valley that acts as a sort of amplifier for the motion of quakes.

Geologists in Golden, Colorado tell CBS station KCNC that the quake happened on the boundary of the North American Plate where it meets up with another plate. Experts say one plate is sliding into the North American plate, which caused the earthquake.

They say that particular part of the country is an extremely active area for earthquakes.

The last substantial earthquake in the Colima area was in 1995. It registered 8.0 magnitude and killed 49 people. At least 100 people were injured in that quake, which was a little northwest of Tuesday's earthquake.