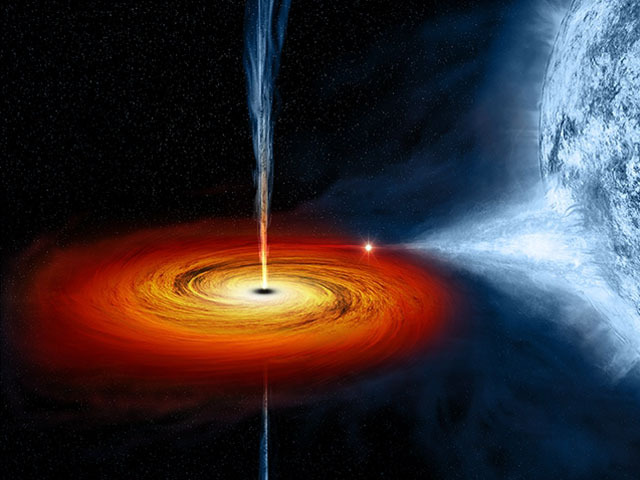 To strive for the most complete understanding of a black hole, astronomers have turned their telescopes to the double-star system Cygnus X-1, which boasts the first of these discovered oddities.

The move paid off, providing detailed information on the black hole's mass, spin and its distance from the sun.

The knowledge could help scientists piece together information about the black hole's state today, and also reveal clues about its early history.

Decades in the dark

To study objects in space, astronomers rely on information emitted in the form of electromagnetic radiation — light. But the gravity of black holes is so strong that no emission escapes, making them a challenge to study. The only information they reveal is their mass, spin and electrical charge.

Containing a star and a stellar-mass black hole, Cygnus X-1 is tucked within the constellation of Cygnus the swan, inside the Milky Way. Its discovery in 1972 prompted widespread discussion, including a friendly bet by Stephen Hawking, as to whether or not it held a black hole. (Hawking lost.) [Video: Final Nail in Stephen Hawking's Cygnus X-1 Bet?]

In three papers published in the December issue of the Astrophysical Journal, Mark Reid and Lijun Gou of the Harvard-Smithsonian Center for Astrophysics in Cambridge, Mass., and Jerry Orosz of San Diego State University report the most detailed look at a black hole ever when they examined Cygnus X-1.

Before the astronomers could start their measurements, they needed to determine just how far away the Cygnus X-1 system is.

Using the Very Large Baseline Array, a radio telescope system spanning from Hawaii to the Virgin Islands, the team first calculated the most accurate distance yet to Cygnus X-1. The object is 6,070 light-years from the sun, they found.

The Very Large Baseline Array also revealed that the object was moving very slowly through the Milky Way — only about 9 miles per second (15 kilometers per second).

The scientists then combed through two decades' worth of data from Chandra X-Ray Observatory, the Rossi X-Ray Timing Explorer, the Advanced Satellite for Cosmology and Astrophysics, and visible light measurements.

Combining this data allowed them to calculate that the black hole within Cygnus X-1 is almost 15 times more massive than the sun, making it one of the most massive stellar black holes in the Milky Way.

From there, the astronomers calculated that the black hole spins more than 800 times per second — almost half the speed of light.

None of these steps could have been taken until an accurate measurement of the distance to Cygnus X-1 was obtained. Previous estimates had placed it between 5,800 and 7,800 light years.

"If the distance is so rough, the measured spin rate could be anywhere," Gou told SPACE.com.

That rapid rotation could help astronomers as they analyze other dark giants.

"Knowing that the black hole was formed with an apparently large spin helps constrain detailed models of supernova and/or stellar collapse," Orosz told SPACE.com in an email.

Its fast spin, combined with its slow progress through the galaxy, give hints about the black hole's origin.

The high rotational speed was most likely a product of its birth. At the same time, if the black hole had been created by a stellar explosion called a supernova, the force of the blast would have provided a "kick" that would have caused Cygnus X-1 to travel faster through the Milky Way.

Independent research, published almost a decade ago, suggests that the black hole was produced by a stellar implosion without an explosion, when a massive star collapsed in on itself after a supernova.

However, the black hole in Cygnus X-1 seems to have been born of a relatively mild stellar death.

"In this case, there is no core bounce that generates the massive shock wave that creates a supernova," Orosz said. "Thus, a direct collapse could be a relatively mild event as seen from great distances."

Such a transformation would have allowed Cygnus X-1 to hold on to the mass and energy that most stellar black holes lose during their violent deaths.

Photos: Black Holes of the Universe
What's at the Center of Black Holes?
Top 10 Strangest Things in Space