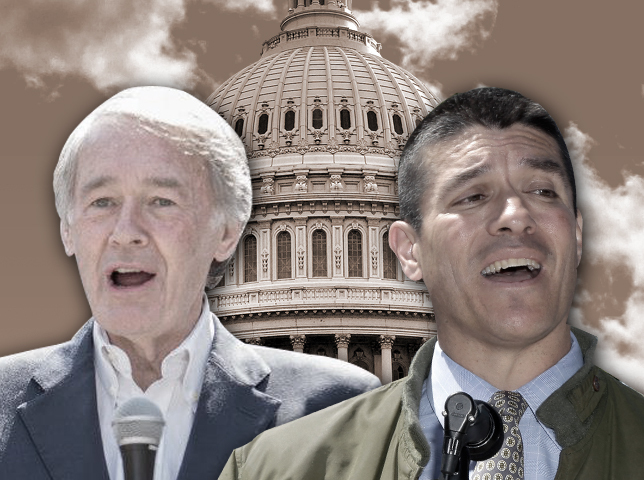 It's summer in Massachusetts, when residents' thoughts have turned from long winters to beaches, Berkshires and backyards. But this is an election preview, not a travelogue, so you might wonder what the weather has to do with it.

It's one the wild card, if any, left in Tuesday's Senate special election to fill the seat left vacant when President Obama appointed Sen. John Kerry, D-Mass., to serve as secretary of state. Rep. Ed Markey, D-Mass., has been consistently up in the polls in this very blue state, leading by about 10 points in public surveys; some GOP polls have had his Republican opponent Gabriel Gomez in striking distance, but trailing nonetheless.

Massachusetts votes mainly on one single day, without a lot of mail balloting or absentee voting -- typically more than nine in 10 of its votes are cast in the precincts -- so the campaigns have one day to ramp up and get out the votes they need. Tuesday, they need to do it through whatever distractions crop up on a June day that doesn't traditionally see voting.

"With many people focused on the Bruins playing in the Stanley Cup Final, the Bulger trial, and the end of the school year, the special election has a lot of competition for attention," Massachusetts Secretary of State William Galvin said in a statement last week.

It's been a tough campaign against the backdrop of that spring weather, and frankly, voters may be fatigued coming out of the last year's presidential election and the heated Senate race between Elizabeth Warren and Scott Brown.

Though the race doesn't seem to serve as a barometer of the national mood, part of the debate between Markey and Gomez has been over ties to the national parties: Markey did his best to link Gomez to the Republican Senate caucus (not popular in Democratic Massachusetts) though Gomez stressed his independence. Gomez, for his part, looked to paint Markey as a long-time congressional insider (Congress, of course, not being very popular anywhere) who'd deliver more of the same, just in a different chamber. Gun laws and taxes were key, too, but Gomez has seen both the pluses and minuses of starting out as a lesser-known figure. He's looked to define himself as a different kind of Republican who could fit with the Massachusetts electorate, but Democrats heavily outspent him, with ads trying to boost his negatives, determined not to let a seat slip away as happened in 2010.

A Gomez formula would have to max out almost all the state's Republicans and hope a lot of Democrats decide to stay away. This doesn't look like a persuasion play anymore; it isn't enough for a Republican to win the independents in Massachusetts because there are so many Democrats, provided they show. Markey has even had a slice (about one in five) of former Scott Brown voters in a recent Boston Globe/UNH poll, which would be a formula Gomez couldn't withstand.

There's been enough polling with enough likely voter screens to suggest Markey is up to some degree, even allowing for some variation in turnout. In the Globe poll, Markey was up among those likely voters who said they were extremely interested in the race. Still, little is in the bank the way it might be if this were a high mail-ballot or early voting state.

If you're watching vote patterns, they're pretty straightforward. Overall indicators suggest vote totals may be a little tepid, not reaching levels seen in the last special election. The secretary of state noted the absentee requests are lower than they were in the last special as well. (Although most voters don't use absentees, their relative level compared to past elections can be a useful indicator of interest in a campaign.)

As we noted in our race review last month, Markey is likely to win in densely populated Boston; the question is by just how much. Gomez needs to show well along the coast, down the Cape, and in the outlying suburbs and counties.