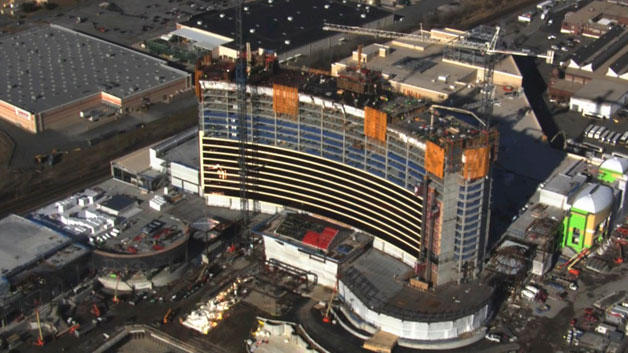 In 2016, construction began for the Wynn Boston Harbor resort casino on the banks of the Mystic River in the Boston suburb Everett. The $2 billion project, which will sit on 30 acres of land, is set to open in the summer of 2019.

In a statement, the commission that regulates the casino industry in Massachusetts, said it "is now aware of and is taking very seriously the troubling allegations detailed in the Wall Street Journal article."

"The suitability and integrity of our gaming licensees is of the utmost importance, and ensuring that suitability is an active and ongoing process," the commission said. "Consequently, the MGC's Investigations and Enforcement Bureau will conduct a regulatory review of this matter to determine the appropriate next steps."

Gov. Charlie Baker said through a spokesman that that he is "deeply disturbed by these allegations and expects them to be taken seriously."

"This administration has a zero tolerance policy for sexual harassment and expects the Commonwealth's employers to create a safe work environment for all employees where reporting harassment of any kind is encouraged and properly addressed," said Brendan Moss, spokesperson for Baker.

According to the Wall Street Journal, Wynn Resorts employees in Las Vegas and other people described Wynn as a CEO who sexualized his workplace and pressured workers to perform sex acts.

A manicurist who worked at Wynn Las Vegas is among Wynn's accusers, claiming that, shortly after he opened his flagship Las Vegas casino in 2005, Wynn forced her to have sex after she gave Wynn a manicure in his office suite. The Journal reports Wynn later paid the manicurist a $7.5 million settlement.

In a statement Friday, Wynn denied the allegations.

"The idea that I ever assaulted any woman is preposterous," Wynn said. "We find ourselves in a world where people can make allegations, regardless of the truth, and a person is left with the choice of weathering insulting publicity or engaging in multi-year lawsuits.  It is deplorable for anyone to find themselves in this situation."

He further states that the accusations are "the continued work of my ex-wife Elaine Wynn, with whom I am involved in a terrible and nasty lawsuit in which she is seeking a revised divorce settlement."

Wynn, who led the RNC's fundraising efforts during President Trump's first year, said in a statement Saturday after his resignation the "work we are doing to make America a better place is too important to be impaired by this distraction."