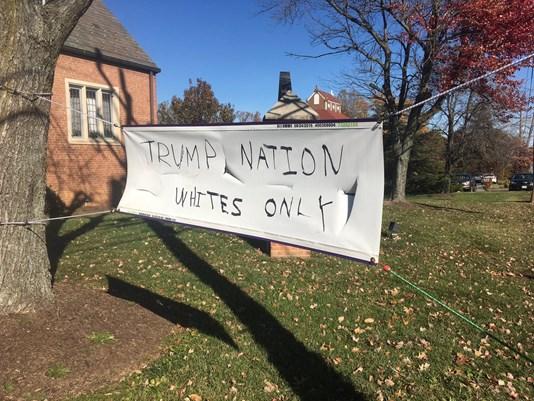 SILVER SPRING, Md. - The head of the Episcopal Diocese of Washington is calling on President-elect Donald Trump and his supporters “to separate themselves from acts of violence and hate” after a church in a Maryland suburb with a strong Latino population was vandalized with a racist message that mentions Trump.

Church officials say a banner advertising the Spanish-language service at the Episcopal Church of Our Saviour in Silver Spring was slashed Saturday night and the words “Trump nation. Whites only” were written on the back. The same phrase was written on a brick wall in the memorial garden of the parish.

Bishop Mariann Edgar Budde called for unity following Sunday services. She says she doesn’t want immigrants and people of color “to imagine that this is who we are as a nation.”

CBS Washington, D.C. affiliate WUSA reports Montgomery County Police said they have not made an arrest in the case.

There have been increasing reports of the harassment and bullying of minorities in Trump’s name since the election.

On “60 Minutes” on Sunday night, President-elect Trump said he is saddened to hear that minorities are being harassed after the presidential campaign. When asked if he had a message for those committing acts of racism and violence in his name, Mr. Trump replied: “Stop it.”