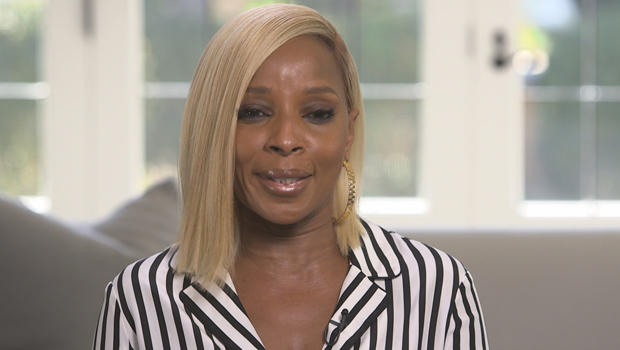 Next Sunday night's call for "The Envelope, Please..." will be a double feature of sorts for pop star Mary J. Blige. Michelle Miller tells us why:

Less than two weeks before the Academy Awards, Mary J. Blige -- up for not one, but two Oscars -- is on stage on Tampa giving her all.

"It's a show where it's real fans, the energy is through the roof," she said. "It's amazing!"

No question about it: Mary Jane Blige writes her own script.

"She's not afraid of anything," said producer Jimmy Iovine, one of the biggest names in music, who has known Blige for decades. "Mary brings you on a journey and she connects with her fans like that. And she really reflects the life she's lived, the struggles and all."

And now, the woman called the "Queen of hip hop soul" is taking Hollywood by quiet storm.

As the matriarch of a family of Southern sharecroppers, she strains against crushing racism and poverty in the movie "Mudbound." Audiences at early screenings didn't even recognize Blige as Florence Jackson.

"The beauty about all these accolades that are coming with this part is that I disappeared," she said. "And I think that's what acting is about.

"I'm so happy that people did not recognize me!" she laughed. "I was happy about that."

It might seem a long journey for Blige, from the housing project in Yonkers where she grew up, just outside New York City, to the South of the 1940s.

Or, maybe not. "For people who don't know, my family is Southern," she said. "My mother's Southern. My father's Southern. And every summer, you know, you're a kid from New York, your family sends you down South in the summers. This woman [her character Florence] is my grandmother; she was a sharecropper's wife, and my grandfather would be mowing the lawn and doing everything else and she would be out in the field. I saw her kill chickens."

"You had the template?" Miller asked.

"Yeah, she was definitely in my DNA!" Blige laughed.

"Mudbound' was directed by Dee Rees, and both director and star have already made Oscar history -- Rees as the first black woman nominated for Best Adapted Screenplay; and Blige in two categories: Best Supporting Actress and Best Original Song. To get those two nominations in the same year is unprecedented.

As Florence, Blige keeps her fury in check, with one thing on her mind:

"Survival," said Blige. "See, my mom was that woman as well. Because my mom was a single parent. And we didn't live in a great neighborhood. You could call it Beirut! For a child, it was like a war zone. Her whole goal was survival for her children."

What was her favorite go-to? "The Children's Aid Society commercial. Remember that?"

Blige hit commercial success with her first album, "What's the 411?," which was considered a revolutionary blend of R&B and rap.

To watch Mary J. Blige perform "Real Love," from her album "What's the 411?," click on the video player below:

"What did you numb?"

"I was numbin' just pain from things that have happened to me as a child."

She's been open about the sexual abuse she says she suffered, by a familyacquaintance, starting at the age of five. That gives her an especially strong connection to today's #MeToo movement.

She wore black to the recent Golden Globes ceremony. Miller asked, "Was there personal empowerment in that for you?"

"I mean, this whole movement is personal empowerment for me, because a lot of women are speaking everything that happened to them. Like, we couldn't do that when we were growing up. We had to keep our mouths closed."

Blige now has a platform to speak up these days. She's won virtually every music award, again and again, including nine Grammys.  But she wasn't nominated this year. In fact, very few women were.

The night of the ceremony, the president of the Grammys, Neal Portnow, drew criticism for saying that women need to "step up."

Miller asked Blige, "Do women need to step it up?"

"Women have been steppin' it up for years," Blige replied. "That comment is just ridiculous to me."

As Oscar Week approaches, Mary J. Blige would seem to be sitting on top of the world. But for the past year she's been involved in a bitter divorce from her husband of 14 years, Kendu Isaacs. She says the split even left her temporarily homeless.

That's when she turned to Jimmy Iovine and his family. "We just jumped in and said, 'Okay, what do you need?'" Iovine said.

Like, a place to live? "Well, she stayed with us, you know what I mean? And we loved having her. Breakfast with Mary -- it was incredible."

And to Blige it was incredible what happened last month -- the day she turned 47. On her birthday she was honored with a star on the Hollywood Walk of Fame.

At the ceremony she said, "I always want to earn everything. I don't play games with this. I want people, when someone is praising me or looking up to me, I need to have earned that, so I'm so grateful for this star right now because I've earned it probably three times, but I'm so grateful that I have it!"

Setting the stage for what could be an historic Oscar Sunday.

As Blige said, "This moment is the pay-off, and this moment says, 'You know what, Mary? You stood strong."

To watch Mary J. Blige perform "Strength of a Woman," click on the video player below:

Will Smith resigns from the Academy after slapping Chris Rock at Oscars
More
Thanks for reading CBS NEWS.
Create your free account or log in
for more features.
View CBS News In
CBS News App Open
Chrome Safari Continue
Be the first to know
Get browser notifications for breaking news, live events, and exclusive reporting.