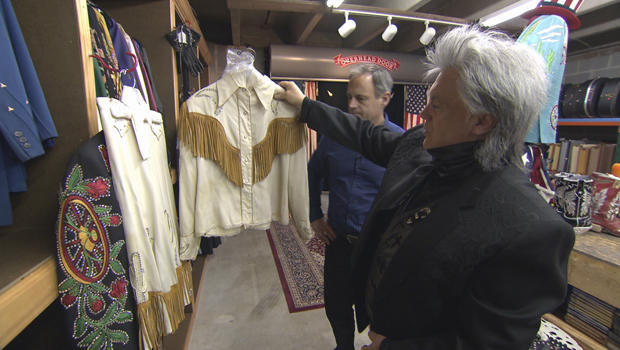 On stage, Marty Stuart always sparkles, from his cowboy clothes to his virtuosity on the guitar and mandolin. But this country star has also had a side gig for 40 years, as the keeper of Nashville's memories.

One rhinestone suit at a time, Stuart has built one of the largest private collection of country music memorabilia in the world – 20,000 pieces in all, a trove of Hillbilly treasures.

All that sequin and sparkle was stored in a private warehouse outside Nashville. But all those boots, hats, guitars, all this cowboy couture and history, seemed headed for a trip to the dump.

"These were treasures that were slipping away, getting lost," said Stuart, now 60, recently touring with his band, the Fabulous Superlatives. "And there came a time in my life where [I thought], 'What do I do with the nickels and dimes that I'm making? Buy stocks and bonds, or what I love the most?'"

Country music had him hooked him at the age of five, when he got his first cowboy guitar: "My local radio station, WHOC, Philadelphia, Mississippi – '1490 on your radio dial, a thousand watts of pure pleasure' – it was a beautiful station. And I loved everything I heard. But it was country music that touched my heart."

"And as true today as when you first heard it?" asked correspondent Mark Strassmann.

"Well, the things that country music is parodied for sometimes – trains, drinking, sin, cheating, redemption, jailhouses, rambling, hoboing, on and on, all those things – according to The New York Times, every one of those subject matters is still relevant."

In 1972 Stuart, a self-taught prodigy joined Lester Flatt's legendary bluegrass band. He was 13 years old, and by age 21 he was playing backup for Johnny Cash.

A string of solo hits came in the 1990s, including "Tempted" and "Hillbilly Rock."

But by then, country music had changed, gone corporate. Country's roots seemed at the edge of nothing.

In the early 1980s Stuart was in a junk store in Nashville and found Patsy Cline's train case, on sale for $75. "And I thought, 'This is wrong. This is wrong.' And I thought, 'There's a bigger mission here.' And it became my heart to preserve, hang onto, promote and further the culture of country music any way I could."

He bought Cline's case, and started collecting what others had forgotten, or left by the curb. "I can't get enough. Well, that's country – I was raised a country child."

One warehouse of leftover treasures became three warehouses. He showed Strassmann some of the outfits worn by the greats.

One suit belonged to the "Hillbilly Shakespeare," Hank Williams.

"You must have a soft spot for certain artists," said Strassmann.

"Well, it's hard not to love Hank Williams!"

He also has Williams' manuscript of the song "Cold, Cold Heart," signed and dated November 23, 1950. Stuart said, "I'd respectfully submit to all my songwriting brothers and sisters, when you're standing in a museum, a handwritten manuscript has more charm than an email!"

And of course his collection of cash ... Johnny Cash, that is, the Man in Black. Stuart has Cash's first black performance suit.

Stuart has a lot of Johnny Cash, his next-door neighbor (and for a time, his father-in-law, when Stuart was married to Cindy Cash), including the original manuscripts of the songs "San Quentin," and "Folsom Prison Blues."  "John gave it to me," he said.

Stuart also took the last photo of Cash, four days before he died: "He looked like an old president, didn't he?"

"And I looked and it had 'Cash' written on it," said Stapleton. "And I said, 'Is that Johnny Cash's guitar?' And he said, 'Yep. It used to belong to Johnny Cash and before that it belonged to Hank Williams, and now it belongs to Marty!'

"He was just there to play it and write songs, and it was the coolest thing in the world!"

Stuart's collection of cool things, valued at roughly $25 million, has been moved to his hometown of Philadelphia, Mississippi, where he hopes to break ground in 2021 on a permanent display of his treasures.

Strassmann said, "This is your presidential library!"

"The Congress of Country Music in Philadelphia, Mississippi is absolutely my dream presidential library!," Stuart said. "Those items, they empower me. When I pick up Hank Williams' guitar or that first suit that Johnny Cash wore on stage, it empowers me. It's kind of like hanging onto kryptonite or something. And it's fun!"