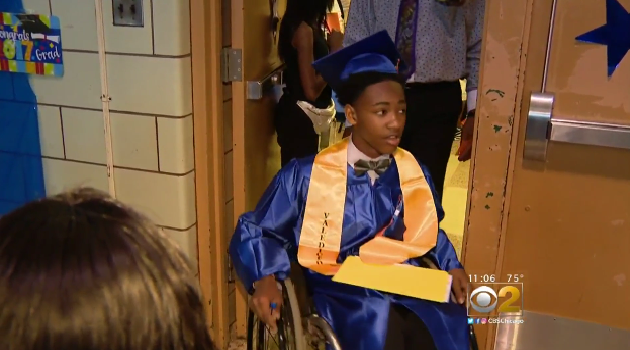 CHICAGO -- A Chicago teenager who was struck years ago by a stray bullet during gang crossfire has accomplished one of his proudest achievements: graduating as class valedictorian.

The 2008 shooting left Martrell Stevens paralyzed from the waist down. But he never let his injuries get the best of him.

On Tuesday, Stevens graduated at the top of his 8th grade class at Wadsworth STEM Elementary School, according to CBS Chicago.

Stevens is not only smart. He's wise beyond his years.

Martrell acknowledged that it took him a while to reach that kind of understanding.

"That kind of humbled me because when it happened, I was just a kid," he said. "But now, I look on it now and I'm glad it happened."

Martrell's injuries prevented him from participating in some activities, like playing on the school's basketball team. So instead, he joined a wheelchair league.

"You could always do what you put your mind to," Martrell said. "If someone tells you you can't do that, do it anyway, because you will never know if don't try."

Martrell says he plans to attend a private boarding school in Boston for high school. He's received a full scholarship.

He says he decided to leave Chicago partly due to the violence.