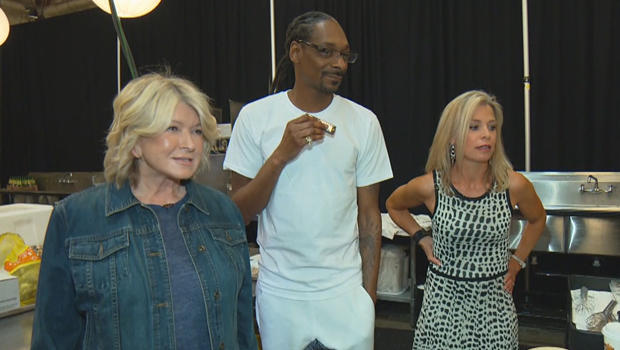 Martha Stewart, the head of the lifestyle empire, believes the time she spent in prison for charges related to insider trading helped give her "street cred" in the eyes of her television sidekick, rapper Snoop Dogg, she tells Tracy Smith in an interview for CBS' "Sunday Morning" to be broadcast Nov. 19.

Stewart, who did five months in prison in 2004, says the conviction helped bridge the gap between her and the rap icon, who also has a past that includes jail time for drug dealing.

"Yes, that helped," Stewart tells Smith. "Because people knew how crazy and unfair … all of that was. And in Snoop's world, it gave me the street cred I was lacking."

Stewart and Snoop Dogg talk with Smith about their VH1 series, "Martha and Snoop's Potluck Dinner Party," their unlikely pairing, and more. The interview is featured on "Sunday Morning"'s annual holiday-themed broadcast, "Eat, Drink & Be Merry."

On the cooking-lifestyle show, Stewart's dishes tend to be exotic and expensive, while Snoop's cooking is based on nostalgia. Stewart praises Snoop's Cornish game hen recipe.

The combination of the two media figures, along with the guests and the food, exposes a different side of her personality, Stewart admits.

"I don't think it's Snoop necessarily," Stewart says, "but I think it's the subject matter. I mean, when you cavort with Jamie Foxx and Usher and Puff Daddy and P. Diddy and whatever, you're a different person."