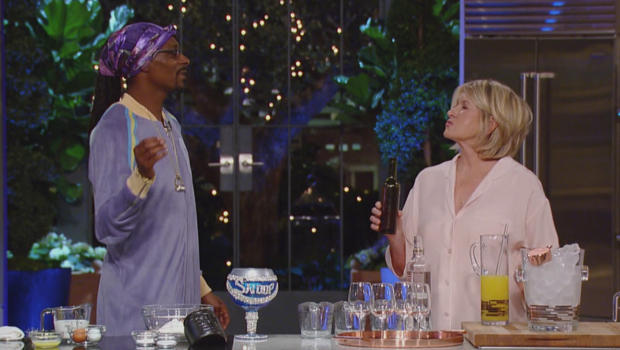 Any time two celebrity chefs get together, it's fair to ask WHAT'S COOKING? Particularly when it's the two celebrities our Tracy Smith found sharing a kitchen:

They might be the oddest couple in television: lifestyle queen Martha Stewart and rapper Snoop Dogg. Their VH1 TV show, "Martha and Snoop's Potluck Dinner Party," is in its second season. It's part cooking show, part celebrity talk show, and part happy hour.

But it does all seem to work.

To watch an excerpt from the Season 2 premiere of "Martha and Snoop's Potluck Dinner Party," click on the video player below:

Back in May, Smith went backstage before they taped a New Orleans-themed show.

At 76, Stewart is as persnickety as ever, checking every mini king cake and every freshly-shucked oyster. "I always like to come through the kitchen and make sure everybody's happy and doing a good job," she smiled.

"It's interesting, because as fun as the show is, as much fun as you guys have, this is serious," said Smith.

Truth is, hanging with Snoop and his pals only seems to have made Martha more popular. As she says,  "It's good for the brand."

"Do you see it not just in the numbers, but in people that you meet on the street?" asked Smith.

"Oh, I'm so famous now, when I'm seen, I mean, everybody says 'Hello' to me, and I'm Martha to everyone. First-name basis. I know how Oprah must feel because she's a first-name also, and it's nice."

Their friendship dates back to a 2008 appearance Snoop made on her show. Turns out, they have a lot in common. Martha and Snoop are both self-made millionaires with huge followings and a serious work ethic, say producers Sally Ann Salsano, Ted Chung and Kim Miller.

Of course they do have different styles: At rehearsal, Martha's all business, and Snoop looks like he's at a perpetual party with music in his head, or on his harmonica.

"You know, real superheroes got theme music when they move!" he said.

"Sometimes it is, sometimes it's not. Right now it is."

But they clearly seem to respect one another.

"I love his food, too," she said. "His Cornish game hens that he made yesterday were the best thing so far on this show."

"So, let me just ask you, a couple of decades ago could you ever have imagined yourself saying, 'Snoop's Cornish game hens were the best ever'?" Smith said.

"Yes, you do," Snoop said. "And you teach me so much when I'm on this show. She teaches me how to be better chef, better prepared … you know, preparation is key 'cause I love to cook with love!"

Cooking skills aside, Calvin Broadus (he was nicknamed "Snoop" by his mom) is one of the most successful rap artists in history, with a past that includes time in jail for drug dealing and an acquittal on a murder rap.

Smith asked Stewart, "Does Snoop bring out a side of Martha that is a different side?"

"I don't think it's Snoop necessarily, but I think it's the subject matter," she said. "I mean, when you cavort with Jamie Foxx and Usher and Puff Daddy and P. Diddy and whatever, you're a different person."

And she used to be very different indeed. Martha Stewart was a fashion model who built a food and lifestyle empire said to be worth, at its peak, close to $2 billion.

And then, she went away.

Stewart did five months in a West Virginia prison after being convicted on charges related to insider trading. But she says the experience was, on balance, a good thing, in that prison time helped. "Because people knew how crazy and unfair all that was. And in Snoop's world, it gave me the street cred that I was lacking."

"You think it did, prison time?"

And she seems up for anything. But the silliness comes with a subtle message.

"You've always thought of yourself as a teacher," Smith said. "What do you want people to learn from this show?"

And maybe that's what makes this party work – not just the food or the music, but the fact that everyone's invited.