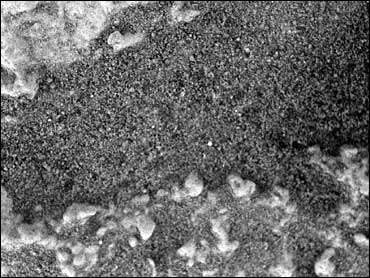 The Mars rover Spirit has hit a home run by landing in a rugged plateau dubbed "Home Plate," but scientists are still trying to decipher its geology.

The six-wheeled Spirit reached the northern edge of the broad mesa last week about four months after climbing down from a Martian hill as tall as the Statue of Liberty. Scientists believe "Home Plate," which stands about 6 feet high, holds important geologic clues to the Red Planet's past.

So far, scientists say they are puzzled by what they have seen. Unlike other areas of Gusev Crater that Spirit has analyzed, "Home Plate" is made of a highly layered rocks that are coarse at the bottom and fine at the top.

"It's stunning ... by far the best layering we've ever seen at Gusev," principal investigator Steve Squyres of Cornell University recently posted on his Web site.

Squyres said it's too early to say what the rocks are made of, or how it fits into the Mars story.

Layered rocks can be formed by several different ways such as a volcanic eruption or impact crater. They also can be deposited there by wind or water. Squyres said it appears that the rocks were formed from a volcanic explosion, but more study is needed.

"The bottom line for now is that we've got a spectacular mystery in front of us, and far more questions than we have answers," Squyres wrote.

Previous examination of the crater by Spirit reveal a violent history. Three outcrops examined by the rover displayed deposits of water-altered debris from explosive events. Scientists believe hot ash once fell from the sky about 4 billion years ago. During that time, water was present, but not a large amount.

Engineers plan to steer Spirit toward a rugged rock outcrop that scientists have nicknamed "Gibson" after the baseball catcher Josh Gibson. Engineers have not decided how long they intend to keep Spirit there.

Spirit and its twin, Opportunity, have been exploring opposite sides of Mars since January 2004. The solar-powered robots, managed by NASA's Jet Propulsion Laboratory in Pasadena, have outlasted their primary mission and are working on overtime.