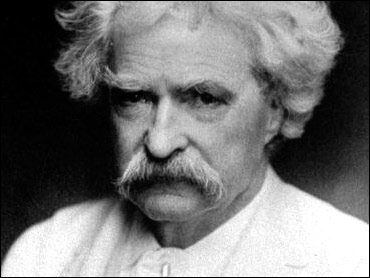 The most celebrated American author and humorist of all time has assured his place in the 21st century.

Mark Twain's autobiography, shut inside a vault for 100 years since his death in 1910, will finally be published.

The author of "The Adventures of Tom Sawyer," "The Prince and the Pauper" and the iconic 'The Adventures of Huckleberry Finn" left 5,000 pages of his memoirs at the University of California at Berkeley under orders that they not see the light of day for a century, reports the Independent.

Why did he want to keep scholars and literary devotees waiting for so many years?

Many speculate that the pages are filled with criticism of the politics of the day, of his former lovers and views on God.

"There is a perception that Twain spent his final years basking in the adoration of fans. The autobiography will perhaps show that it wasn't such a happy time," the historian Laura Trombley told the Independent. "He spent six months of the last year of his life writing a manuscript full of vitriol, saying things that he'd never said about anyone in print before. It really is 400 pages of bile."

Twain struggled with financial problems in his later years and had many debts. He had also struggled with depression following the deaths of his wife and daughter.

This is the first time that the world will have access to these pages.

"There are so many biographies of Twain, and many of them have used bits and pieces of the autobiography," Robert Hirst, who is leading the team at Berkeley editing the complete text told the Independent. "But biographers pick and choose what bits to quote. By publishing Twain's book in full, we hope that people will be able to come to their own complete conclusions about what sort of a man he was."