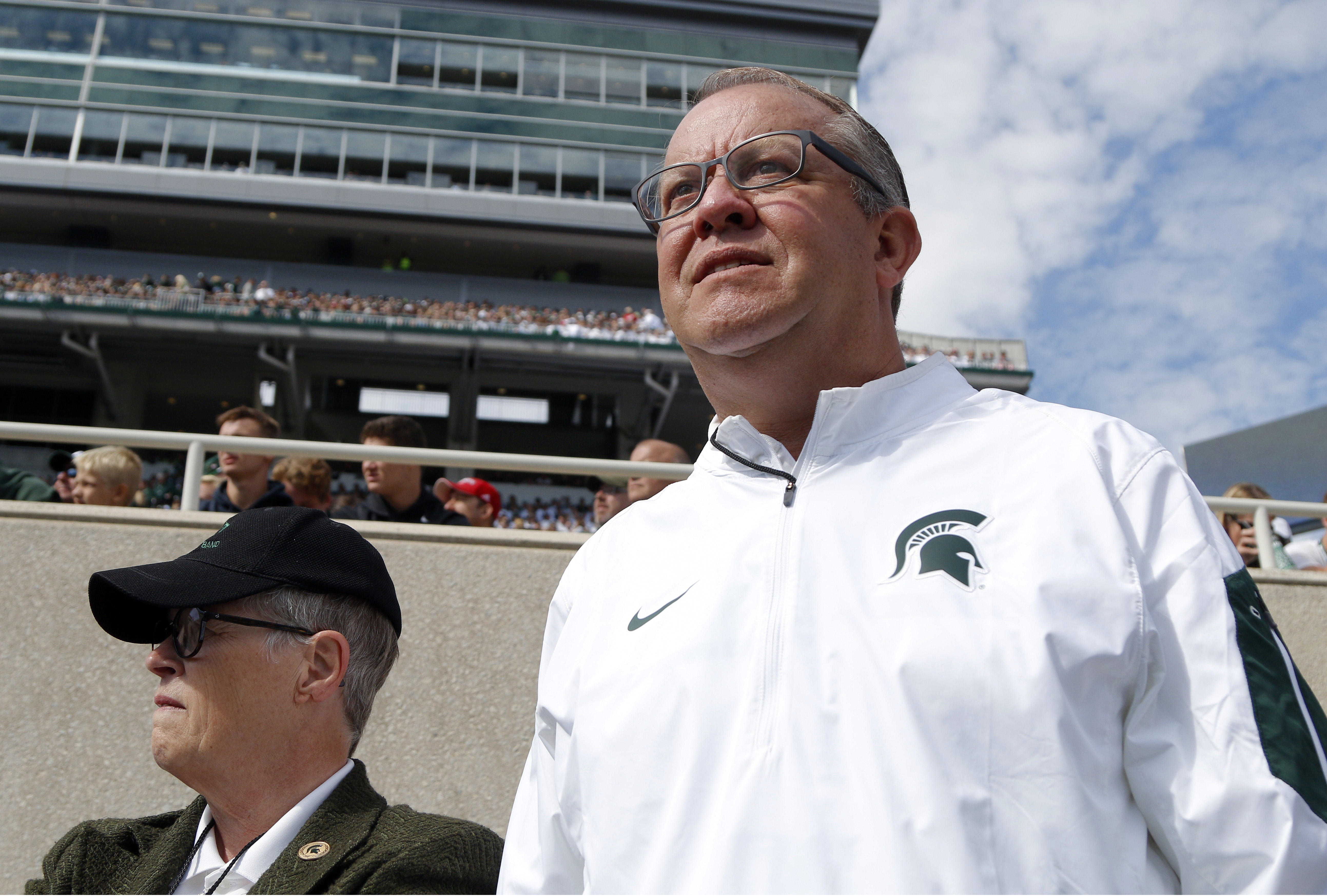 EAST LANSING, Mich. -- Michigan State athletic director Mark Hollis announced his retirement Friday in the wake of the Larry Nassar sexual abuse scandal. He is the second university official to step down this week amid sharp criticism over the school's handling of allegations against Nassar, a disgraced former sports doctor.

Hollis, who had been in the job for 10 years, disclosed the move during a meeting with a small group of reporters on campus. He was asked why he would not stay on.

"Because I care," Hollis said, holding back tears. "When you look at the scope of everything, that's the reason I made a choice to retire now. And I hope that has a little bit, a little bit, of helping that healing process."

Michigan State University President Lou Anna Simon submitted her resignation late Wednesday, hours after Nassar -- a former employee at Michigan Stat -- was sentenced to 40 to 175 years in prison for molesting young girls and women under the guise of medical treatment.

Aquilina said it was her "honor and privilege" to sentence Nassar.

Several of the 150-plus victims who spoke at Nassar's hearing were former athletes at Michigan State, and many victims accused the university of mishandling past complaints about Nassar, who also is accused of molesting Olympians and other young gymnasts while working for USA Gymnastics.

"I don't believe that I've ever met him," Hollis said of Nassar. He insisted he didn't know about allegations of abuse until an Indianapolis Star report in 2016.

Hours later, the university named its vice president to serve as acting president after the departure of Simon. Bill Beekman is expected to serve in the role until the board of trustees can hire an interim president and then a permanent leader.

At their meeting, all eight trustees made statements, many of them emotionally delivered. Board Chairman Brian Breslin said it was "clear that MSU has not been focused enough on the victims."

Trustee Brian Mosallam said: "I am so truly sorry. We failed you."

Beekman is vice president and secretary of the board. He previously led the MSU Alumni Association and began working at the university in 1995. He has an undergraduate degree from MSU.

The university is preparing for new investigations by the state attorney general, state lawmakers and the NCAA while facing lawsuits filed by more than 130 women and girls.

The board expressed support for Simon before her resignation but she faced pressure from many students, faculty and legislators. While there has been no evidence that Simon knew Nassar was sexually abusing girls and women, some of the more than 150 women and girls who have accused him said they complained to university employees as far back as the late 1990s.

Board members, who are elected in statewide votes, have come under intense scrutiny. Two announced they will not seek re-election. Another, Joel Ferguson, apologized this week after saying there was more going on at Michigan State than "this Nassar thing." He previously had said victims were ambulance chasers out for a payday. The school long resisted calls for an independent investigation before asking Attorney General Bill Schuette for a review a week ago.

"I am shocked and embarrassed at how insensitive some in the MSU family continue to be," trustee Mitch Lyons tweeted. "I look forward to implementing a plan today at our board meeting to create real change."

In a recent filing, Michigan State asked a judge to dismiss the cases against the university on several technical grounds, not the merits of the allegations. The school says it has immunity under Michigan law and that the majority of victims were not MSU students at the time of the alleged assaults.

"These arguments can seem disrespectful" to victims, but a defense is required by Michigan State's insurers, Simon wrote in a campus-wide email last week. She added, "We have the utmost respect and sympathy" for victims.

The board last month authorized the creation of a $10 million fund to help victims access counseling and mental health services.

A Title IX probe conducted by the university cleared Nassar of sexual assault allegations in 2014. He was, though, advised by the school to avoid being alone with patients while treating their "sensitive areas," but the school didn't follow up on and enforce its request. At least 12 reported assaults occurred after the investigation ended, according to a university police report that was provided to the FBI for review by the U.S. attorney.

Hollis said he did not know about the 2014 investigation and has told as much to the FBI and to campus police.

"In hindsight, you ask yourself that question," he said when asked if he should have been aware of it. "But that was not my choice at that time."

Michigan State gymnastics coach Kathie Klages resigned last year after she was suspended for defending Nassar. Klages is accused of downplaying complaints about Nassar in 1997 -- 21 years ago. William Strampel , who was dean of Michigan State's College of Osteopathic Medicine and has been named in lawsuits by victims, announced last month he was taking a leave of absence for medical reasons. Strampel remains a faculty member.

Hollis, like Simon, is a Michigan State graduate. He has been the Spartans' athletic director since 2008 and was chairman of the NCAA Division I Men's Basketball Committee last season. Hollis' unique ideas include putting hockey and basketball games in football stadiums and a basketball game on an aircraft carrier. One of his best friends is a Michigan State icon: Hall of Fame basketball coach Tom Izzo, the best man at his wedding and a former roommate.

Hollis walked into a conference room in the athletic department's new headquarters with his wife and sat alone at a table behind microphones. He choked back his emotions as he announced his retirement.

"I have always been a Spartan and I always will be," he said.

Meanwhile, U.S. Education Secretary Betsy DeVos confirmed on Friday her agency is investigating the Nassar scandal and will hold Michigan State University accountable for any violations of federal law. DeVos said in a statement that what happened at the school is "abhorrent" and "cannot happen ever again - there or anywhere."

The Education Department already has been investigating separate Title IX complaints at the university and the school's compliance with providing campus crime and security information.