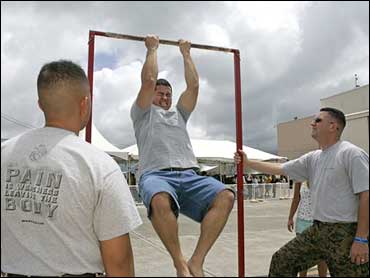 Teens looking to hook up with a friend on the popular Web community MySpace may bump into an unexpected buddy: the U.S. Marine Corps.

So far, over 12,000 Web surfers have signed on as friends of the Corps in response to the latest military recruiting tactic. Other military branches may follow.

MySpace.Com, the Internet's most popular social networking site with over 94 million registered users, has helped redefine the way a generation communicates. Users, many in their teens and 20s, post personal profiles and accumulate lists of friends and contacts with common interests.

"That's definitely the new wave," said Gunnery Sgt. Brian Lancioni at a Hawaii recruiting event. "Everything's technical with these kids, and the Internet is a great way to show what the Marine Corps has to offer."

Patrick Baldwin, an 18-year-old recruit from Saratoga, N.Y., who linked his profile to the Marines' site after hearing about it from a friend, said MySpace was a good place for interested teens to start learning more about the Marines.

"The more information you have the better off you are," said Baldwin, who left for boot camp a few weeks ago.

The Army, which originally balked at advertising on MySpace because of well-publicized incidents of child predators using the site to meet kids, plans to soon set up its own profile page.

"It is where prospects are," said Louise Eaton, media and Web chief for the U.S. Army Accession Command. "We go to where they are to try to inform them of the opportunities we offer."

Recruiters say MySpace is good for advertising, but they would never sign someone up to join the Marines unless they've met him or her in an old-fashioned, face-to-face meeting.

Web surfers who open the Marines' MySpace page can click on a tab titled "Contact a Recruiter." This directs them to the Marines.com site where they are prompted to fill out a form with their name, address and phone number so recruiters can arrange to meet them.

So far over 430 people have asked to contact a Marine recruiter through the site in the five months since the page went up, including some 170 who are considered "leads" or prospective Marine recruits.

The Marine Corps isn't the first to use MySpace profiles to reach the Web community's core audience of teenagers and twentysomethings.

Toyota Motor Corp. has a page to promote the Yaris, its new subcompact car. Verizon Wireless sponsored a contest on MySpace for the best single by an unsigned band.

MySpace has rapidly become the online social forum of choice for many who like how easy it is to make and communicate with friends via the site. But MySpace — and News Corp., its parent company — have had problems.

In Maine, a 27-year-old man was sentenced to three years in prison for sexually abusing a 14-year-old girl he met on the site.

To boost the site's safety, MySpace recently imposed restrictions on how adults may contact younger users. Those who are 18 and over can no longer request to be on a 14- or 15-year-old's list of friends unless they already know either the youth's e-mail address or full name.

The Army initially posted ads on MySpace in January but withdrew them a month later when reports emerged about child predators approaching youths via the site. MySpace has since assured the Army it has better security protections in place.

As for other branches, the Air Force places regular advertisements on MySpace, but doesn't have a profile. The Navy hasn't used MySpace.

Steve Morse with the Central Committee for Conscientious Objectors is critical of recruiters using MySpace profiles. But Morse said they don't surprise him because the Iraq war has forced the military to search "under every bush" for recruits.

"It's kind of obnoxious of them to be using something that's sort of like a youth domain, to kind of come in and really sucker youth into something they're not really explaining fully," Morse said.