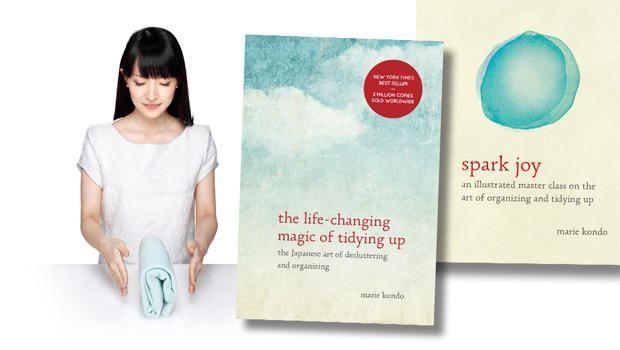 Just in time for spring cleaning, Lucy Craft has sent us tidying-up tips from an expert, in this Postcard From Tokyo:

Folding shirts is not everyone’s idea of fun. But in the hands of decluttering diva Marie Kondo, drudgery becomes almost an art.

With fluid precision, she renders T-shirts into clothing origami. Her closet-arranging lessons have become the Bible of home organizing to millions of reformed hoarders around the world.

“We’ve all tried to fold our clothes upright, so that they fit in the drawers, and it’s kind of cool!” said one woman in Texas.

A tiny, self-described wallflower who barely speaks English, Kondo has channeled her fixation with order into fame, fortune, and a home-organizing empire.

Passionate fans have paid her the ultimate tribute: the methodical purging of excess junk is now known as “kondoing” your stuff.

Melissa & Doug co-founder opens up about her secret struggle

Linda Lavin: "I've worked more in these 2½ months than I have in 2½ years"

Craft asked, “What do you think of your name becoming a verb in English -- to kondo something, to clean something up?”

“It feels strange,” Kindo replied. “But since my brain is full to the brim with thoughts of cleaning, I guess it’s appropriate.”

With the single-mindedness of a scientist in search of a cure, Kondo has devoted most of her 32 years on Earth to waging war on disarray.

To Kondo, the humble act of housecleaning is transformed into sacred ritual, performed in a pure-white outfit, and starting with prayer.

She no longer makes house calls, leaving that to her apprentices. But she gave Craft a demonstration.

Dump all your clothes in a heap, keep only what makes you happy, and say “thanks” to each possession before throwing it out.

Kondo’s mother, Michiko, told us her daughter’s mania for order began when she was in grade school.

“When I came back from a vacation, two-thirds of my clothes were gone,” she recalled. “So when it came to family belongings, my husband told her to knock it off!”

While other students ran out for recess, Kondo stayed in the classroom to straighten the bookshelves.

By her early twenties, she was able to quit working and declutter for clients fulltime.

As her talent for tidying became legendary, Kondo came up with her trademark -- tokimeki, or “spark joy.”

“A customer was struggling with what to keep and what to get rid of,” Kondo said. “So I suddenly said, does owning this spark joy? From then on, cleaning really went fast.”

Weeding out what doesn’t spark joy, she said, applies to just about anything.

“After cleaning her house, one of my clients changed jobs,” she told Craft. “Another one dumped her boyfriend.”

“So, you’re not just a decluttering counselor, you’re really a life coach?”

Needless to say, in the publishing business, Kondo is cleaning up. Her books have been translated into 40 languages and have sold over seven million copies. She has been named one of Time Magazine’s 100 Most Influential People.

California native Laura Evans said Kondo’s mantra is perfect for an era of downsizing: “This is like a worldwide, first world problem, that we have so much stuff. And if someone can kind of get to the heart of it, that it’s really not about the stuff, it’s about our emotional attachment to the past.”

In addition to Kondo’s daughter, Satsuki, the decluttering diva’s latest “baby” is a smartphone app to keep her fans motivated, and a venture to train scores of clean-up consultants.

The Kondo-izing of America has just begun.