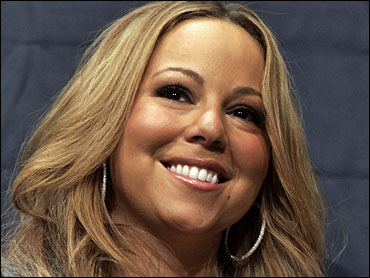 Mariah Carey was a standout among this year's Grammy nominees, picking up eight nods, including Album of the Year for "The Emancipation of Mimi" and Song and Record of the Year for her ballad "We Belong Together."

Many observers see the nominations as proof Carey's comeback from tough times in her career and personal life is complete.

But, right after the nominations were announced, Carey

"Of course, it's a comeback," she said. "But it's like I've continued to make music that I'm still proud of. I was playing some music the other day from an album from a couple of years ago and somebody said, 'Is that a new song? I like that!' And I'm like, 'No that was one of the ones they never let me release back a few years ago.' "

Carey, who's already a two-time Grammy winner, said it was nice being in Gotham Hall when the nominations were announced: "This (Thursday) morning has just been a room full of amazingly talented people. And I feel blessed to be a part of today. And it's been an incredible year and I'm just grateful for everything I have."

Carey co-wrote all the songs on "The Emancipation of Mimi," and explained to Storm that Mimi is a nickname her closest friends use.

"I just wanted people to kind of see the real me," she said, "as opposed to whatever preconceived notions that they had. That's why I chose to use my nickname in the title."

What sort of preconceived notions did she want to dispel?

"It wasn't even really about dispelling them. It was about … shaking off anything other than this moment that I'm living in, which is a really blessed place that I'm in. And I'm just really grateful for everything."

Carey says faith got her through her professional and personal down times.

"I really think it's about spirituality and getting back to a place where you're really close to just really having as much faith as possible in yourself and in God and just praying and believing," she said. "And I'm really not trying to preach to anybody. That's just how my journey has been. And I couldn't be more thankful."

Carey admits her early Grammys were almost too much to comprehend at the time, and notes she won them a long time ago.

"It's almost like half my life," she said. "So I'm sitting here going, 'Wow, this has been — I've literally kind of grown up doing this. And learned a lot of lessons.' And I feel I'm at a much better place to appreciate a moment like this."

Carey remembers "being completely intimidated (at the time) standing there singing 'Vision of Love' with Aretha Franklin in the front row. And I was like, 'What's happening?' That was like six months into my career. I mean, I was like, 'What is going on?' So I didn't — I didn't really take it in, you know."

The 48th annual Grammy Awards can be seen Feb. 8 on CBS.