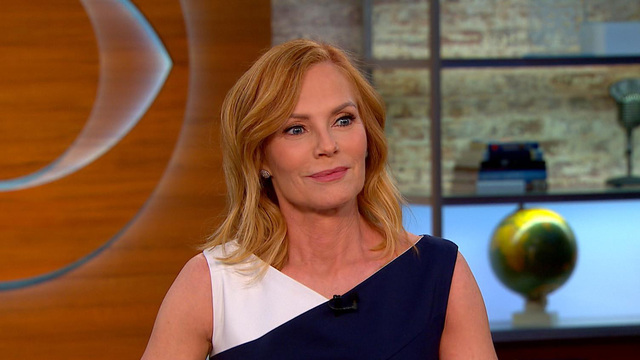 Emmy award-winning actress Marg Helgenberger stars in "Under the Dome" as Christine Price, a therapist sent to help the town of Chester's Mill deal with the aftermath of the dome.

Her character is not in the original 2009 Stephen King novel on which the show is based, rather executive producer Neil Beherer created Price with Helgenberg in mind.

"I was very flattered," she said Monday on "CBS This Morning." "I've known Neil for many years, since 'China Beach' days actually, and he's a lovely guy and a very talented man...He just felt that I had what it took to play this role and its very complex and it's a very juicy part and I'm having a ball with it."

Juicy, in part because Helgenberger channels her former cougar persona from "The Graduate" -- Mrs. Robinson.

"Under the Dome" tells the story of a town suddenly cut off from the rest of the world by an enormous transparent dome. It was last summer's number one program, with more than 11 million viewers.

Helgenberger said her character is there to help everybody out.

"I'm hoping to make this a collective or a 'kinship' as my character refers it by going a long to get along and people need to kind of leave their individuality behind which doesn't go well with everyone in the community," she said.

Helgenberger is also well known for her 12-season role as Catherine Willows on "CSI." She will return to that show for its two-hour series finale airing September 27.

"I wish I could tell you something, but I haven't heard a peep, other than, 'Oh you're gonna love what you have to do,'" she said.

Nevertheless, Helgenberger is excited to work with her old cast once again.

"It will be great, because that cast was magic, we really all loved each other and had so much fun on the set, a lot of great memories," she said.

Season three of "Under the Dome" premieres Thursday, June 25th at 9/8 CT.