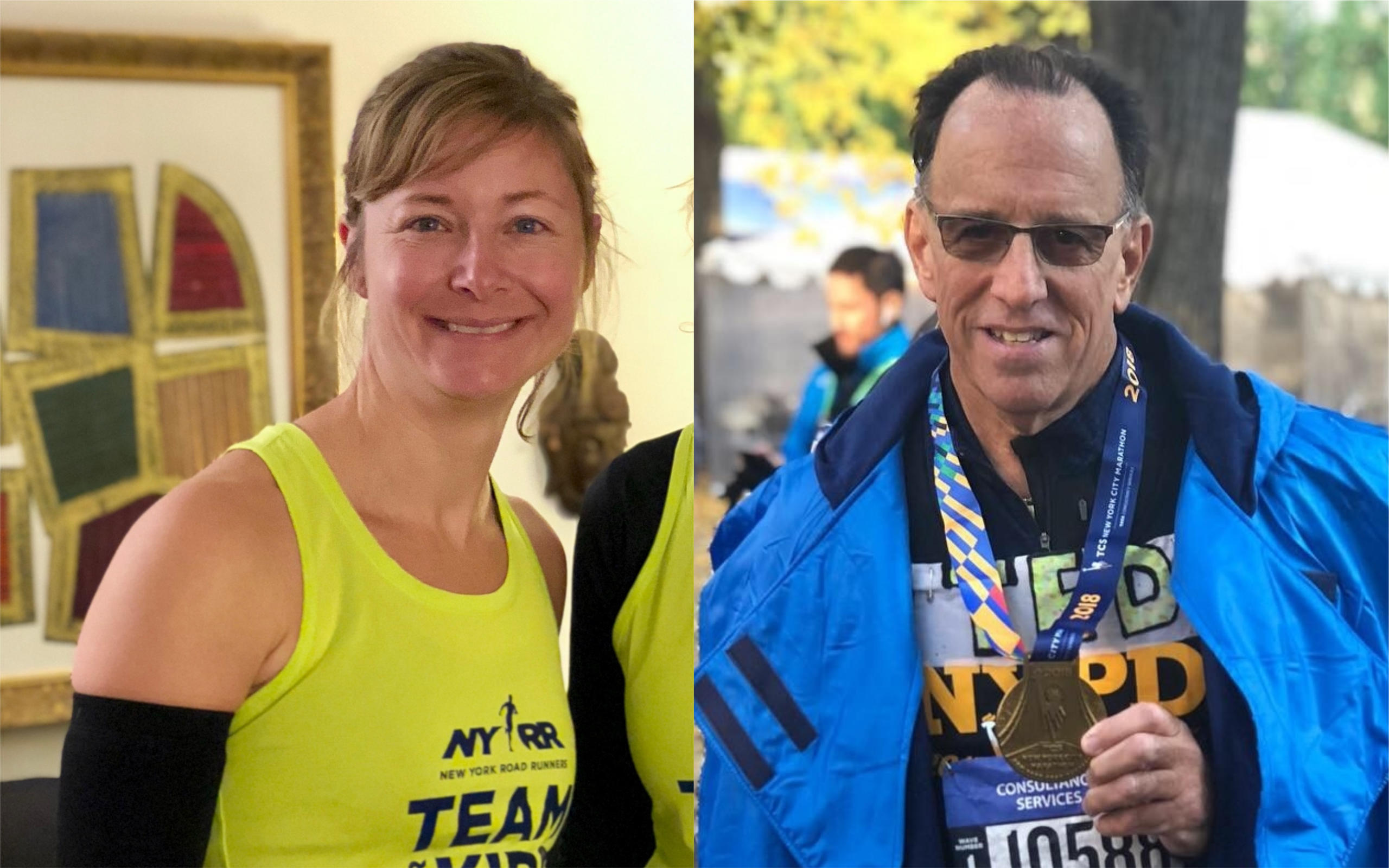 On Nov. 4, more than 52,000 people from around the world came shoulder-to-shoulder to run the New York City Marathon. Two of those runners came together at mile 16 that day and changed each others' lives forever.

Kristie Elfering, 41, an experienced ultramarathon runner from Minnesota, had run countless long-distance races but was excited to hop off the trails of her home state and onto the busy streets of New York for the city's legendary marathon.

Elfering said people kept asking her if she felt safe running in New York and she would always say "yes." Little did she know how safe she would be.

After running over the Queensborough Bridge into Manhattan, Elfering felt something wasn't quite right. "I just remember thinking, 'I'm a little warm, but we're coming off the bridge,'" Elfering told CBS News. "I remember seeing the people, like, 'Oh, we're back in and they're going to cheer me on.' Then I don't remember anything."

Elfering fell to the ground — she was having a heart attack. Her friend and running partner, Victoria, who had traveled to New York to run the race with her, panicked.

Strange, 60, a father from Staten Island, New York, has been a geriatric physician for decades, but said nothing prepared him for the high-stress medical rescue he encountered during the marathon.

"Twenty-five marathons and I have never listened to anything except the music of the crowd," he told CBS News. "If I were to be wearing headphones, I would not have heard what I needed to hear."

What he heard was someone calling for help during the race. It was Victoria, standing over Elfering, who had collapsed onto the ground.

Dodging oncoming runners, the doctor made his way over to the pair.

He tried to wake up Elfering and quickly realized she hadn't just fainted — it was much more serious. "She didn't have a pulse," he said. "I just said, 'I'm starting CPR, I need a defibrillator.'"

Paramedics and members of the FDNY ran from the sidelines and helped. It took the team four tries with the defibrillator to resuscitate her.

Finally, they were able to get a heartbeat and put Elfering in an ambulance. Victoria rode with her to nearby New York Presbyterian Hospital. Her first responder, Dr. Strange, was left on the marathon course — shaken.

"I was left standing at 58th and 1st saying, 'Oh my God,'" he said, getting choked up by the memory. "And a police officer said, 'What can I do for you, doc?' And I said, 'I don't know what you can do for me.'" He paused in disbelief at what had just happened. Then, with encouragement from the crowd around him, he ran 10 blocks further to his waiting family.

At 68th Street, he collapsed into his wife's arms. "I just had to give somebody CPR in the field," he said, crying.

"You had to give somebody CPR? It's OK, it's OK. Did they live?" his wife said, holding his head in her hands. But at that point, he didn't know the answer.

Eventually, Strange was able to collect himself, and a fellow runner passing by encouraged him to rejoin the race. He jumped back in and says he ran the last 10 miles of the marathon in a daze.

"My wife and daughter were there. They knew at the finish line I didn't care about the medal. I just wanted to know that the patient I was taking care of was OK," Strange told CBS News. "Because that's what I would always do. And I couldn't find out. And that's the first time I couldn't find out."

He went home that night, exhausted from the race and worried about Elfering. Fortunately, one of Elfering's nurses knew Dr. Strange from a mutual friend. When Elfering told the nurse the story, she put two and two together and realized the connection.

She was able to connect the doctor and patient, who spoke on the phone. Strange was relived to know Elfering was alive, but both wanted more closure.

Elfering was visited by a high-ranking NYPD official, Chief of Counterterrorism James R. Waters, and thanked him for the NYPD and FDNY personnel who helped during the race. She was able to thank the staff at New York Presbyterian Weill Cornell, who nursed her back to health.

But she wanted to thank Dr. Strange in person, too.

About one week after the marathon, she was able to do that. CBS News was there to capture the moment they saw each other again for the first time.

"Is it you?" Strange asked in disbelief.

The two cried tears of joy, knowing that if fate hadn't brought them together that day, the outcome for Elfering could've been much worse.

Elfering explained that she now wears a portable defibrillator. She has experienced cardiac episodes since the race.

Strange said even though Elfering was extremely healthy and was used to running very long distances, heart problems can be genetic. He advised everyone — no matter how healthy they are — get their hearts checked by a doctor.

Elfering also got to meet Strange's family. "That's for letting me borrow him!" she joked.

Several people who heard the story have called him a hero, but Strange downplayed that, saying, "I'm no hero – maybe a good Samaritan."

She hopes to begin running again in the coming months, and wants to return to New York for next year's marathon. "I've never not finished a race before." she said. Elfering hopes if she returns, she can run the race with Dr. Strange.