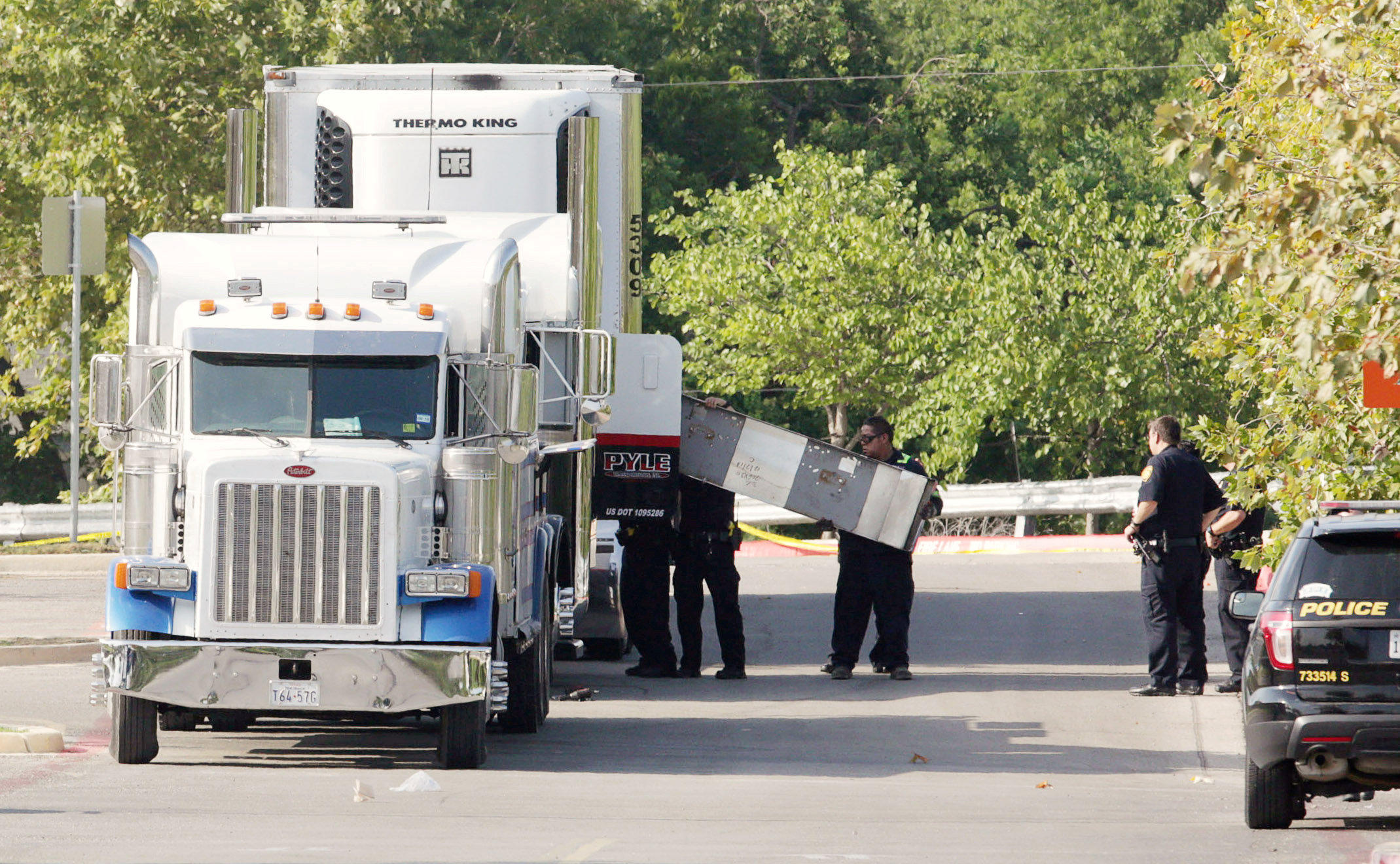 SAN ANTONIO -- Nine people are dead and the death toll could rise after emergency crews pulled dozens of people from a sweltering tractor-trailer found parked outside a Walmart in the midsummer Texas heat, victims of what officials said was an immigrant-smuggling attempt gone wrong.

The driver was arrested, and nearly 20 others taken from the rig were hospitalized in dire condition, many with extreme dehydration and heatstroke, officials said Sunday.

Thirty survivors were hospitalized in all, officials said.

One U.S. official said Sunday evening that 17 of those rescued were being treated for injuries that were considered life-threatening. The official spoke to The Associated Press on condition of anonymity because the information has not been publicly released.

Authorities were called to the San Antonio parking lot late Saturday or early Sunday and found eight people dead inside the truck. A ninth victim died at the hospital, said Liz Johnson, spokeswoman for U.S. Immigration and Customs Enforcement.

The victims "were very hot to the touch. So these people were in this trailer without any signs of any type of water," San Antonio Fire Chief Charles Hood said.

All the dead were adult males, authorities said.

Authorities would not say whether the trailer was locked when they arrived, but they said it had no working air conditioning.

It was just the latest smuggling-by-truck operation to end in tragedy. In one of the worst cases on record in the U.S., 19 immigrants locked inside a stifling rig died in Victoria, Texas, in 2003.

Reyes said he does what he can to help the people who come to his yard. "I'm a human being and I care about others," Reyes said emotionally.

Based on initial interviews with survivors of the San Antonio tragedy, more than 100 people may have been packed into the back of the 18-wheeler at one point in its journey, ICE acting Director Thomas Homan said. Officials said 39 people were inside when rescuers arrived, and the rest were believed to have escaped or hitched rides to their next destination.

Four of the survivors appeared to be between 10 and 17 years old, Homan said. Investigators gave no details on where the rig began its journey or where it was headed.

But Homan said it was unlikely the truck was used to carry the immigrants across the border into the United States. He said people from Latin America who rely on smuggling networks typically cross the border on foot and are then picked up by a driver.

"Even though they have the driver in custody, I can guarantee you there's going to be many more people we're looking for to prosecute," Homan said.

Mexican Consul General in San Antonio Reyna Torres said Mexican nationals were among the survivors and those who died on the rig.

A Guatemalan official said two natives of Central American country were among those hospitalized. Consul Cristy Andrino in McAllen said the two told her they had crossed into the U.S. on foot and were later picked up by the rig.

Guatemala was seeking to obtain witness status for the two survivors so they wouldn't be deported, Andrino said.

Federal prosecutors said James Mathew Bradley Jr., 60, of Clearwater, Florida, was taken into custody and would be charged on Monday in federal court. The local U.S. Attorney's Office wouldn't say whether Bradley was the alleged driver of the truck who was arrested. It was not immediately known whether Bradley had an attorney who could speak on his behalf.

The U.S. Homeland Security Department stepped in to take the lead in the investigation from San Antonio police. Department Secretary John Kelly said the incident demonstrates the brutality of smuggling organizations that "have no regard for human life and seek only profits."

The truck had an Iowa license plate and was registered to Pyle Transportation Inc. of Schaller, Iowa. A company official did not immediately respond to a phone message seeking comment.

San Antonio is about a 150-mile drive from the Mexican border. The temperature in San Antonio reached 101 degrees Saturday and didn't dip below 90 degrees until after 10 p.m.

The tragedy came to light after a person from the truck approached a Walmart employee and asked for water late Saturday night or early Sunday morning, said McManus, the local police chief.

The employee gave the person water and then called police, who found the dead and the desperate inside the rig. Some of those in the truck ran into the woods, McManus said.

Investigators checked store surveillance video, which showed vehicles arriving and picking up people from the truck, authorities said. Walmart released a brief statement Sunday saying it was doing what it could to help investigators.

Vigils and prayer services for the victims were held throughout San Antonio Sunday evening.

At one, college student Diandra Borrero said, "I just can't imagine them being stuck in there dying when they thought they were coming here for a better life. This is really sad. It shakes me."

Rey Saldana remarked, "You see eight bodies in body bags and the backstory is more gruesome then what you're seeing the fact that these people went to a torturous experience."

Immigrants' rights activists and church officials held up handmade signs reading "Who here is not an immigrant" and "No human is legal."

Those gathered at one vigil held a moment of silence, then gave speeches blaming federal and Texas authorities' embrace of harsher immigration policies for contributing to the deaths.

Jonathan Ryan, executive director of a nonprofit called Raices, said it's "an unfortunate example" of what happens when such polices are enacted.

"These tragedies are compounded when it's incredibly dangerous and incredibly expensive and we push migration into the hands of illicit actors," Libal told The AP in a phone interview. "Everyone's thoughts today should be not in politicizing it but in making sure that everyone who survived this ordeal is treated with respect and get the protection they need."

A group of immigration lawyers and advocates sued Homeland Security Secretary Kelly and other U.S. officials this month alleging that guards on the U.S. border with Mexico have illegally turned away asylum-seekers.

In the May 2003 case, the immigrants were being taken from South Texas to Houston. Prosecutors said the driver heard them begging and screaming for their lives but refused to free them. The driver was sentenced to nearly 34 years in prison.

"These criminal organizations, they're all about making money. They have no regard for human life," Homan said.

The Border Patrol has reported at least four truck seizures this month in and around Laredo, Texas. On July 7, agents found 72 people crammed into a truck with no means of escape, the agency said. They were from Mexico, Ecuador, Guatemala and El Salvador.

Authorities in Mexico have also made a number of such discoveries over the years.

Last December, they found 110 migrants trapped and suffocating inside a truck after it crashed while speeding in the state of Veracruz. Most were from Central America, and 48 were minors. Some were injured in the crash.