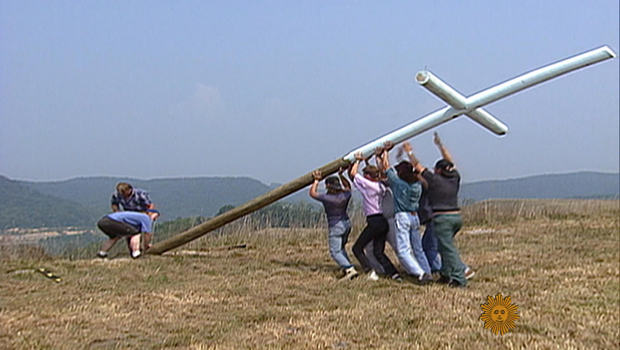 Time now for an Easter Sunday story of a devout man's personal mission -- a mission that a new group of devout believers is carrying on today. Bill Geist leads us on a journey across America ... and back in time:

A few weeks ago, volunteers from Wynndale Baptist Church in Terry, Mississippi, helped raise three crosses. On the gold one is a plaque, indicating the crosses are here in memory of a man named Bernard Coffindaffer.

There's a good reason his name is there.

In 1993 Geist watched Coffindaffer put up the same kind of crosses, but the "Sunday Morning" story about him never ran.

I'll tell you why, after we see it for the first time....

There, at the crest of the hill, and near the railroad tracks, and at the edge of the highway: crosses, in clusters of three. If you drive long and far enough, you come to realize there are thousands of them.

This is the work of one man: Bernard Coffindaffer. He calls them "crosses of mercy." He chooses his sites with strategic precision.

"This is the last McDonald's for the next 50 miles," he explained. "They all pour in here and eat."

Drive around Coffindaffer's home state of West Virginia, and you soon realize the scope of his plan.

Coffindaffer has erected 1,842 clusters of crosses in 29 states. That's more than 5,500 individual crosses. "In all of creation, I have put up more crosses than any man," he told Geist.

To his family's despair, Coffindaffer has spent his own money on this project -- close to $3 million ... to buy the wooden poles, to hire road crews, to perform routine cross maintenance.

Coffindaffer made his millions in the oil business. But after almost ten years of cross building, he's now clean out of money.

Geist asked, "You ever say, 'Maybe I am a little crazy'?"

"No, no," said Coffindaffer. "I never equated myself to insanity."

But he did have visions. In 1982, while recovering from a heart bypass operation, Coffindaffer says the Holy Spirit came to him. "He said, 'He wants you to put up crosses,'" Coffindaffer recalled. "I am a country boy, unknown to anybody, chosen to head a major, major operation."

Thousands of Americans have given Coffindaffer permission to use their land.

"I think it impresses people as they drive along," said Leslie McKutchin. Leslie and Winford McKutchin gave Coffindaffer a prize spot high atop their 442 acres in West Virginia.

"Ho! Ho! Ho! Don't let loose! For God's sake, don't let loose," said Coffindaffer, leading the erection of a cross. "There it goes, down in the hole!"

"They look beautiful, absolutely beautiful," he said. "They'll stand there unless someone comes along and messes them up."

For his next crosses, Coffindaffer has targeted what he considers some trouble spots: "I want to enter into Los Angeles and New York and all the other places where the tough people live."

He just needs to raise some money, and then, "By the end of the year 1998, I will have covered the Earth."

Geist asked, "Why do you think you were chosen to do this?"

"Because the Lord loves me that much," Coffindaffer said. "Absolutely. I know that's true."

But you know what they say: the Lord works in mysterious ways...

Two days before that story on Bernard Coffindaffer was supposed to air back in 1993, he died unexpectedly from a heart attack. We decided it would be wrong to air our report.

Turns out, his story was just beginning.

Sara Abraham is a Mississippi mom and housewife. She never met Bernard Coffindaffer, but in 1993, she clipped his obituary from the newspaper.

"One day, as I was doing a daily devotional, it fell out of my Bible," Abraham said, "and as I reached down to pick it up, the Lord inspired me that I was to continue his crosses."

And so Abraham created Crosses Across America, a non-profit group that now has 1,400 volunteers to maintain Coffindaffer's crosses, and put up new ones, like these in Terry, Mississippi (below).

Abraham has Coffindaffer's archives, and even uses the same colors on the crosses to continue his dream.

"There are 48,000 miles of interstate highway in America," she said. "We will have crosses every 25 miles all across America."

And even though they'll sit on private property like Coffindaffer's crosses, she knows not everyone will appreciate these public displays of belief.

"A lot of controversial comments come out about the cross ministry, but at least it gets people talking," she said.

A steel cross weighing 25 tons is being erected on the property of Carroll and Grecian Berry, who run Berry's Seafood Restaurant in Florence, Mississippi. Fried fish, and a whole lot more:

"They come here for food and not realizing they're getting fed in the Gospel," said Carroll.

"And when they drive by and see this cross, it reminds them: you know, there's my answer," said Carroll.

It cost more than $170,000 to erect this cross. Berry donated nearly half the money.

"You know, a lot of people will call you crazy for doing what we're doing," said Carroll. "Mr. Coffindaffer, I'm sure they thought he was crazy. He had millions and spent down to his last dollar before he went on to be with the Lord. People call me crazy, but that's fine."