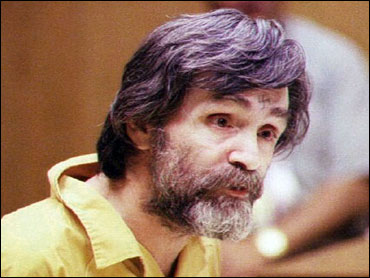 In the last century, perhaps no other person in America has defined evil more than Charles Manson. In the summer of 1969, Manson's followers brutally murdered actress Sharon Tate and six others under his orders.

It would become known as the Tate/LaBianca murders. Manson and three women (Patricia Krenwinkel, Susan Atkins and Leslie Van Houten) stood trial for murder. A fourth Manson follower who was present at the murders, Linda Kasabian, was indicted with the others, but turned state's evidence and was granted immunity in exchange for her testimony.

Vincent Bugliosi, the prosecutor in the Manson trial, wrote of the case in a book called "Helter Skelter." "Helter-Skelter" was a song on the 1968 Beatles "White Album." The lyrics fit with Manson's theory- "Look out helter skelter, helter skelter, helter skelter. She's coming down fast. Yes she is. Yes she is." Manson preached that the black man was going to rise up and start killing the whites and turn cities into an inferno of racial revenge. He believed that the black man would win the war, but couldn't hold onto the power because of innate inferiority. Manson and his "family" would be safe from the racial holocaust because they would be hiding in the desert, safe from the racial wars in the cities.

And the book, Bugliosi tells The Early Show co-anchor Harry Smith, has continued to attract readers. He notes, "The Manson murder case, unlike any other mass murder case in history, continues to fascinate to this very, very day. It never stops. People want to ask questions about it.

"But apart from that, apart from the fascination, The Los Angeles Times was pointing out as of a couple of years ago, Manson continues to receive more mail than any other inmate in the history of the U.S. prison system. Who are writing to him? Young kids, impressionistic, going through a rebellious state and view him as some type of anti-establishment hero, a glorious outlaw."

So on Sunday night, CBS will broadcast "Helter Skelter," a new movie about the Manson case.

Bugliosi says, "I think this TV movie will educate a whole new generation of young people as to who precisely Charles Manson is."

In 1976, CBS broadcast the mini-series, "Helter Skelter," which averaged 36.4 ratings/54 share over two nights and is the highest rated two-part made-for-TV movie ever. The new version focuses more on who Charles Manson was, why he did what he did, and how this 34-year-old man, who had spent two-thirds of his life behind bars, was able to influence others to commit such horrific acts.

Bugliosi says, "He didn't knock down the homes of Iowa and say, 'Do you have any young kids? I would like to bring them along.' Every one of these kids came from average American backgrounds, good backgrounds, but every one had already dropped out of society. Most were heavily involved in the use of psychedelic drugs... I would stipulate these murders would not have happened if it weren't for Charles Manson, but he had the raw material to work with and he was like the catalyst that brought that hostility to the surface.

"He never told these people, 'Either you murder for me or I'm going to murder you.' There were several members of his family totally subservient, do anything for him, but wouldn't kill for him. They didn't have enough guts in their system to kill a fellow human being, but their religion; their cradle was to commit murder. They had plans to kill Sinatra, Liz Taylor, folks like that. They were going to travel around country and murder families in American homes. It was their religion. They enjoyed killing."