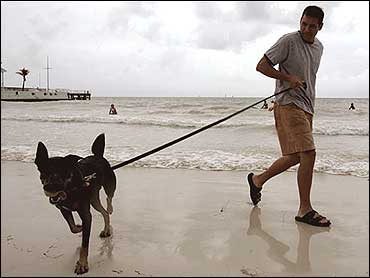 This story was written by Colin Woodard.

At Eotvos Lorand University's Department of Ethology, visitors are usually greeted not by a security guard, but by a delegation of friendly mongrels, tails wagging. Dogs have the run of the place. They play in classrooms, visit faculty members in their offices, or nap in the laboratories. Animals here are no surprise - ethology is the zoological study of animal behavior - but the total lack of cages is.

And why would there be, asks research fellow Adam Miklosi, who leads much of the research here into the cognitive abilities of man's best friend.

"If you were studying human behavior, you wouldn't keep your subjects in a cage for 20 years and then ask them some questions?" he asks with a smile. "These are animals who've been brought up in a normal way, which allows us to see and understand them in their natural environment, which is the human environment."

After a decade studying dogs in their human habitat, Mr. Miklosi and his colleagues have accumulated a body of evidence suggesting that dogs have far greater mental capabilities than scientists had thought.

Dogs' smarts, it turns out, come out in their relationships with people.

The implications of this research are more esoteric than the average dog owner may appreciate. The research doesn't exactly mean that dogs and their masters can enjoy Chaucer together, but it does mean scientists have reason to consider what dog-human communications may say about language skills development.

Another implication is that dogs may make better cognitive study subjects than primates, which have been the focus of the field thus far.

Until recently, domestication was thought to have dulled dogs' intelligence. Studies in the early 1980s showed that wolves, from which dogs probably descended, can unlock a gate after watching a human do it once, while dogs remained stumped after watching repeatedly.

That never sat well with Vilmos Csanyi, the recently retired head of Mr. Miklosi's department. Mr. Csanyi, who had dogs of his own, suspected the dogs were awaiting permission to open the gate, that they regarded opening the gate as a violation of their master's rules.

In 1997, Csanyi and his colleagues tested 28 dogs of various ages, breeds, and closeness to their owners, to see if they could learn to obtain cold cuts on the other side of a fence by pulling on the handles of dishes while their owners were present. Dogs with a close relationship to their owners fared worse than outdoor dogs. But when the dogs' owners were allowed to give the animals verbal permission, the gap between the groups vanished.

Since then, Csanyi's team has demonstrated just how much dogs can accomplish by paying attention to people. In one classic experiment on dogs' use of human visual cues, food is hidden in one of several scent-proof containers. The animal is allowed to choose only one.

Beforehand, the experimenter signals the correct choice by staring, nodding, or pointing at it. Chimpanzees, humans' closest genetic relatives, have always done poorly at this test. Dogs solved the problem immediately.

Dogs also excel at imitating people. In one of the laboratories, graduate student Zsofia Viranyi demonstrates with Todor, an enthusiastic little mutt. Todor sits attentively as Ms. Viranyi spins around in a circle and comes to a stop. "Csinal," she says. ("You do it!") Todor does a little 360 on the tiled floor and lets out an enthusiastic bark. He easily imitates Viranyi's bow, lifting of an arm, and other tasks.

The team found that some dogs can even imitate previously unseen actions performed by a person they haven't had close contact with. Other dogs learned how to operate a simple ball-dispensing machine by watching people use it.

"We thought it would be very difficult for dogs to imitate humans," Csanyi says, Chimps have great difficulty doing so, even with their larger brains. "But it turns out [dogs] love to do it. This is not a little thing, because they must pay attention to the person's actions, remember them, and then apply them to their own body."

Dogs' unusual ability and motivation to observe, imitate, and communicate with people appears to be with them from birth. Two years ago, Csanyi's graduate students were given either a puppy or a wolf cub to raise. They fed the animals by hand, coddling and doting on them.

At five weeks, each cub was placed in a room containing an adult and the student who had raised the cub. Both sat motionless. But while the wolf cubs merely sniffed both humans before climbing into the student's lap to sleep, the puppies yipped at their caregivers, licking their hands and trying to establish contact.

Three months later, the canines were given the opportunity to try to remove a piece of meat from under a cage by pulling on a rope in the presence of their caregiver. Dogs and wolves both mastered this promptly. Then the rope was anchored, making it impossible to obtain the meat. The dogs tried a couple of times, then turned to their masters for assistance or cues. The wolves ignored their caregivers, yanking on the rope until exhausted.

To Csanyi, this proves that dogs have acquired an innate ability to pay attention to people, and thus to communicate and work with them. This is a skill that wolves don't assume even when raised from birth to learn it.

Dogs are "very motivated to cooperate with and behave like people," says Csanyi. "That's why dogs can do things no other animal can do."
By Colin Woodard ©